25 Years On: The Fall of the Berlin Wall 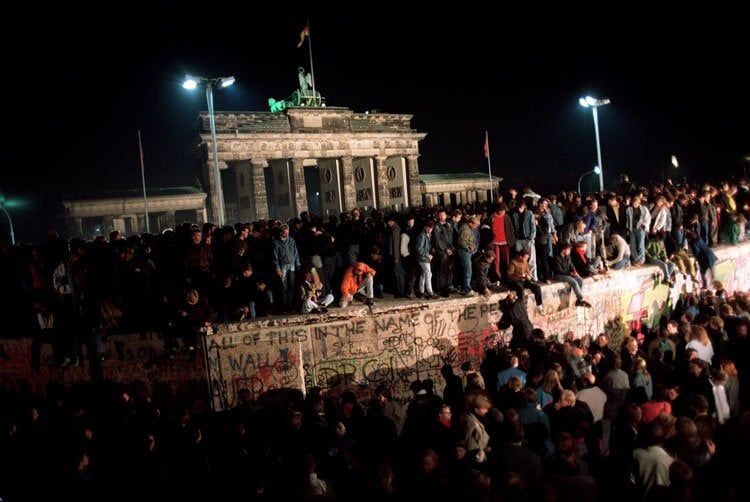 The 9th of November is a significant date in German history for several reasons. In 1848 it was the official end of the March Revolution, which laid the groundwork for the former Holy Roman Empire to become the German Empire in 1871. It was also the date of the end of that empire in 1918, when the Kaiser abdicated after World War I. In 1923, it was the date of a civil uprising in Munich that saw the 34-year old Adolf Hitler sent to prison for treason, and in 1938 it was the date he sent his shock troopers into the Jewish ghettos in what became known as the Kristallnacht. Twenty-five years ago, another event that charted the course of the German nation took place on the 9th of November. For decades, the country had been divided. But the wind of change was blowing across Europe, and the gusts finally became strong enough. On the 9th November, 1989, the Berlin Wall fell.

The Wall had been raised in 1961 in order to close off the last open border between East and West Germany. Officially known within East Germany as Antifaschistischer Schutzwall (”Anti-Fascist Protection Rampart”), it was proclaimed that it was to defend their citizens against the fascist elements that had regained control of the rest of Germany. Of course, this was a complete fiction. The truth was that the parts of Germany occupied by the other three Allied powers from World War 2 (France, America, and the UK) had long since been permitted to coalesce back into a single democratic entity. However the Soviet-administered section (which included the area surrounding Berlin) had remained separate, turned into a puppet state of the USSR. Given the choice between the two, the young and talented people of East Germany overwhelmingly chose to emigrate to West Germany, leading to a situation known as “the brain drain”. Over a million of the brightest and best moved across the border in search of greater opportunity before it was closed, but the East German government could not easily stop them from moving from East Berlin to West Berlin. The presence of this enclave of Westernism within the Iron Curtain was a constant irritant to the Soviets – in 1948, they had attempted to blockade the city, but an international operation had taken place to airlift supplies to the besieged citizens. It was clear that any attempt to threaten West Berlin’s sovereignty would be an immediate trigger of a global nuclear war. Faced with losses to his economy of 9 billion dollars or more due to the emigrating technical expertise, the East German leader Walter Ulbricht (with the explicit permission of Soviet leader Nikita Kruschev) ordered that the border with West Berlin be definitively closed.

Construction began on 13th August. Streets and buildings were destroyed to create a defensible “dead zone”, with the wall itself being begun on the 17th August. The result was an 87 mile long guarded border. The following year, more houses were torn down on the East German side to create a long strip of ground that gave the guards on the wall free sightlines to fire on anyone approaching. On the 24th August, the order came down to shoot to kill anyone trying to cross – the first victim of that policy, Gunter Litfin, died the same day. The Wall as it is most commonly thought of was not built until 1975. Prior to that it had been first a chain-link fence, and then a basic concrete wall, before eventually becoming the iconic 12-foot tall heavily defended fortification. In form it was identical to that built along the border between East and West Germany. Reinforced concrete, topped with a smooth round pipe, watchtowers, dogs and guards with orders to shoot anyone approaching. Families were divided, and the division of Germany came to symbolise the division of Europe to the West.

Ironically, an early attitude to the building of the Berlin Wall was one of relief among Western politicians. It signalled clearly that West Berlin was to remain sovereign, and so mutual nuclear destruction was that much less likely. Still, additional troops were moved to West Berlin. On the 26nd June 1963, John F. Kennedy visited West Berlin, declaring that all free men were citizens of Berlin, and so he was proud to say “Ich bin ein Berliner!” [1] Indeed, over the following twenty-six years West Berlin came to become synonymous with the fight against tyranny. Artists like David Bowie and Iggy Pop made their homes there for a time, with Bowie working out of a studio within sight of the wall itself. Here it was that the sight of Tony Visconti kissing Antonia Maass with the Wall in the background inspired the most famous song about the Wall, “Heroes”. [2] The city became a centre of disaffected youth – living in West Berlin gave them exemption from the otherwise compulsory service in the army. The city had an almost self-consciously decadent air – “there was no closing time in West Berlin”, as Claudia Skoda said. Perhaps it was this music drifting over the wall that led the East Berlin government in 1988 to invite one of the most American artists of all, Bruce Springsteen to perform in their city. If they intended to show their people that they could have music on their side of the wall too, they failed. Though he claimed to have no political agenda, when he said “I’ve come to play rock ‘n’ roll for you in the hope that one day all the barriers will be torn down,” they knew exactly what he meant.

In the summer of 1989, a new song was on everyone in West Germany’s lips. For eight weeks, the number one singer on the charts was David Hasselhoff, and the song he sang was “Looking For Freedom”. [3] Freedom was definitely in the air – in April, the Communist government of Poland had agreed to hold democratic elections, and in June the opposition Solidarity party (an extension of the country’s trade union) swept the board. In Hungary, gradual reforms over the previous year laid the groundwork for similar elections. Hungary opened its borders with Austria in June, effectively allowing both Czechoslovakian and East German citizens free passage to the West. Both governments began to face pressure to open their own borders and allow elections, and though East Germany closed its borders to Hungary, when the Velvet Revolution in Czechoslovakia toppled the Communist regime, they opened a corridor from East to West Germany for any who wished to leave. Deciding that they needed to act as if they were still in control of the situation, the East German government decided to allow limited travel across their own borders. They decided to make an announcement on the 9th November that the following day (after the guards had been briefed) they would permit people to travel from East Berlin to West Berlin, and from East Germany to West Germany. Unfortunately, the note their spokesperson was given before he was put on air failed to mention the crucial detail of exactly when the borders would open. When a reporter asked him that question, he replied hesitantly: “As far as I know effective immediately, without delay.” The fuse had been lit. 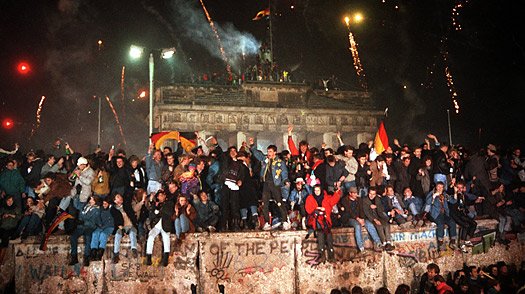 The announcement was the lead story on the East Berlin news, quickly outpacing any attempt to shut it down. Crowds began gathering at the checkpoints at the wall, demanding to be allowed across. At first the guards held them off, then when the orders began filtering down, they started letting a few through, as had been planned, stamping their passports with a note that they could not return. It soon became clear, however, that the crowd was not going to disperse. It could have turned nasty – indeed, the guards’ standing orders would have had them shoot the gathering crowd, but nobody was prepared to give the order. Finally, at 10.45pm local time, the guards retreated. The gates were thrown open. The crowds began to pour through, to be met on the opposite side by crowds of West Berliners. The two groups immediately began to celebrate in a spontaneous street party.

Over the next few days, holes were opened up along the wall. Streets and families that had been severed twenty-six years earlier were finally rejoined. On the 22nd December a crossing was opened by the Brandenburg Gate, in the centre of Berlin, and on the 23rd the crossing requirements were lifted for West Berliners, allowing free transit both ways. Attacks on the Wall, by souvenir hunters as well as public-spirited citizens, opened up unofficial crossings. On the 13th June, 1990, the official demolition of the wall began. By the time it finished, in December, Germany had become a single country once again, and Berlin a single city. The Wall, in every sense, had fallen.

[1] Contrary to what some might have you believe, this does not mean “I am a doughnut”, no more than “I am a Dubliner” would mean “I am a bearded traditional musician”.

[2] At the time and for several years afterwards, Bowie would claim that he did not know the couple – this was to protect Visconti, his producer, who was married at the time. He also knew Maass – she was the backing vocalist on “Heroes”.

[3] A song that, as Matthew Wilkening said, “testifies to the power of music — horrible, horrible music — to unite and uplift us all.”