December 17th will mark 25 years since the inception of The Simpsons, the world’s most famous family? 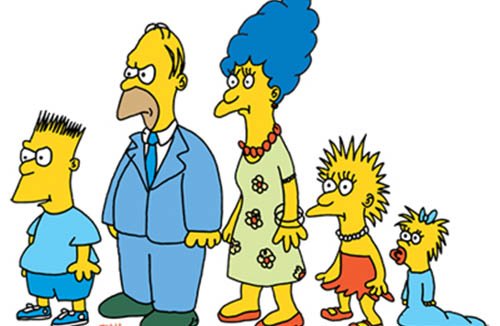 The Simpsons, or rather, a crudely drawn creation, first saw light of day way back in the Spring of 1987 as a set of short animations for The Tracey Ullman Show, but it wasn’t until 1989 that The Simpsons as we know and love it today appeared on our TV screens.

It was in the lobby of James L. Brooks’ office that Matt Groening came up with the idea of the dysfunctional family. Brooks was the producer of The Tracey Ullman Show and he called on Groening to create short animation strips to include in the show before commercial breaks.

Groening named each Simpson after a member of his own family except for Bart, which he used as an anagram for brat. The Simpsons went on to run as short sketches for three seasons of The Tracey Ullman Show before it was finally developed into a half hour show on FOX.

The show arrived at the right time in the right place. It was the end of the 80s and the dawn of the 90s. George H. Bush was an American president with declining popularity ratings, while in Europe the Berlin Wall along with Soviet ideals were collapsing. The Simpsons presented an offbeat edge that Generation X lapped up and the dying establishment feared.

The animated character of Bart was attacked by a furious conservative America who saw him as a bad influence on the youth, but such controversy only fuelled public interest in the cartoon show that spread across the globe.

I was only two years old when The Simpsons first premiered as a primetime show but legend has it that on Sunday evenings a particular bar in town would be packed to the rafters with people there just to watch an episode of The Simpsons. When its popularity exploded, the owner began charging people admission, apparently making a fortune from it.
In 1990 during an interview with People magazine, First Lady Barbara Bush stated that The Simpsons was the dumbest thing she had ever seen. In 1992 while on the campaign trail for re-election, her husband George H. Bush made an election promise to strengthen the American family by making them a lot more like the Waltons and a lot less like the Simpsons. Bush lost his re-election, Bill Clinton became president and the appeal of The Simpsons grew greater with new generations becoming fans of the cartoon family.

The first episode that aired 25 years ago is called ‘Simpsons Roasting on an Open Fire’. The episode was viewed by over 13 million people in the United States and although less amusing than future episodes, it still displayed an edgy sense of humour that no other show had until then, especially for one that was animated.

In the first episode, Mr. Burns denies his employees a Christmas bonus and Homer is left in a financial conundrum because the money his family had saved for Christmas had been spent on the removal of Bart’s tattoo.

For Christmas, Lisa wants a pony while bad-boy Bart requests a tattoo and when the family are out shopping in the Springfield mall, Bart manages to slip into a tattoo parlour to have his Christmas wish granted.

As Bart is having the word ‘mother’ tattooed onto his body, Marge finds him and drags him out of the tattoo parlour leaving his body art partially done.

Homer decides to keep his financial worries a secret and gets a second job as a store Santa Claus but Bart discovers his secret and the two of them go to the Springfield Downs dog track to try their luck at winning some extra Christmas cash.

At the dog track, Homer becomes over-enthusiastic about a dog called Santa’s Little Helper and spends what money he has  left placing a bet on the 99/1 outsider. 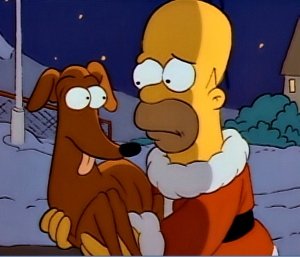 n true Simpsons fashion the dog finishes last but as Homer and Bart are leaving the dog track they witness the owner of Santa’s Little Helper abandoning him.

Bart convinces his father to let them bring the rejected greyhound home, where Homer then tells Marge about the lack of a Christmas bonus but all is forgiven and the dog becomes a Christmas present for all the family. The episode then ends with the clan singing a rendition of Rudolph the Red-Nosed Reindeer.

25 years later and The Simpsons is now the longest running sitcom in the United States, outliving the presidency of George H. Bush and that of his son George W.

Football and Murder: The Deadly Game

Football Transfers Through The Ages