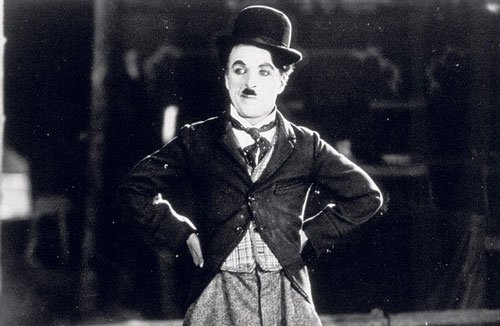 Some movie characters can transcend through time and rightfully claim their place in the pantheon of popular culture and one such character which has achieved this is Charlie Chaplin’s Tramp.

One hundred years ago the world was first introduced to this baggy trouser wearing vagrant on February 7, 1914. Chaplin debuted the Tramp in a short comedy film called Kid Auto Races at Venice which was for the most part a rushed and heavily improvised film. It took only 45 minutes or so to make the film which was shot at a real life cart race. In the film Chaplin plays a vagrant who keeps getting in the way of things in a farcical fashion. The character of the Tramp quickly became popular with cinema goers in 1914 and one hundred years later the Tramp is still one of cinema’s instantly recognisable characters.

Chaplin carefully crafted and nurtured his character so much so that it took him right through from the silent age of cinema to the talkies in the 1930s. The talkies were by then extremely popular but Chaplin refused to give the Tramp a voice, his actions and facial expressions were all that were needed for the iconic character.

Chaplin designed his own costume for the Tramp while messing around with clothes in the wardrobe department of the Keystone studio in Hollywood where he was employed as a minor slapstick comedy actor. The head of the studio instructed Chaplin to find a funny outfit and to find one fast, as everything back then in the movie business was done in quick time, a movie would be shot in a day if not in an hour.

While fumbling about the wardrobe department, which was simply just a shed on the grounds of the film studio, Chaplin came across a pair of baggy pants, which allegedly, belonged to Fatty Arbuckle. He also found an old cane and a small bowler hat. Within minutes of putting them all on, a screen icon was born. The small jacket the Tramp wears is as small as the black bowler hat that just sits on his head while his shoes, which were two sizes too big, worn on the wrong feet and apparently belonging to fellow silent movie actor Ford Sterling managed to give that funny walk of his an added effect. Without doubt the clothes Chaplin picked out helped to project his new character from screen to social conscience. The most notable appearances of the Tramp were in The Kid from 1921 and City Lights ten years later in 1931, while many short films in between cemented the character of the Tramp firmly in people’s minds. In all of these films Chaplin’s roguish Tramp ends up breezing in and out of various towns as the loveable vagrant finding himself in farcical situations and often falling in love with the daughter of an authoritative figure.