Does Obama owe it all to Rosa Parks?

There was no way Rosa Parks was getting up. She was tired, tired of being pushed around, and she was not going to give up that seat. So when the driver turned around to shoo Rosa and those beside her out of the “reserve white” places on the bus to Cleveland Avenue, she just plain refused.

Ms Parks was a seamstress in Montgomery, Alabama. She was on her way home from work. Her simple act of defiance on a winter’s day 60 years ago this month sparked off an anger which had been growing among black people in the south for years, as a result of the effective apartheid system which governed their lives.

Segregation was part of daily life in 1950’s America. Others had displayed the courage to do the same as Parks – such as Claudette Colvin, who, nine months earlier, had also remained seated in a bus in Montgomery. However, for various reasons Colvin did not become the poster girl of the incipient mass rights movement; Parks’s action was the tipping point. 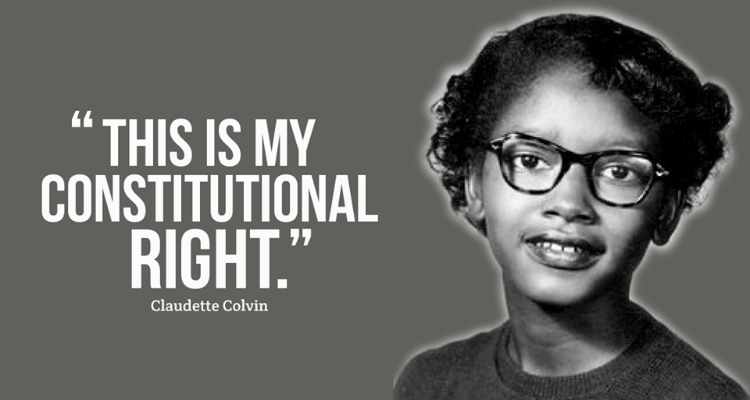 This inequality had its roots in a society in the south which had grown out of one based on slavery. The American South had the “Jim Crow” laws – a raft of various pieces of racist legislation, named after a music hall character, which enshrined apartheid practices.

Legal segregation in schools ended in 1954 with a Supreme Court decision, following the case Brown v. Board of Education. The Civil Rights Act of 1964, signed into law by President Lyndon B. Johnson, outlawed discrimination based on race, colour, religion, gender or origin.

However these legislative measures were a response to massive political pressure. Parks’ defiant act challenged the contemporary law and gave momentum to the peaceful civil rights demonstrations that were happening across America from the 50’s.

Parks’ protest and subsequent arrest launched the Montgomery Bus Boycott – a campaign which drew attention to the racist policies of the transit authorities of Alabama. Leading activists such as Martin Luther King Jr also took part in this campaign. The boycott lasted an entire year, only ending when a federal court order made the segregation illegal.

Although her gesture was a result of her being “tired of giving in”, (1) Parks was a seasoned activist. President of her local chapter of the National Association for the Advancement of Colored People (NAACP), she organised and worked alongside civil rights leaders such as King and Edgar Nixon.

“I was not tired physically, or no more tired than I usually was at the end of a working day. I was not old, although some people have an image of me as being old then. I was forty-two. No, the only tired I was, was tired of giving in…. When I declined to give up my seat, it was not that day or bus in particular. I just wanted to be free, like everybody else”

But she suffered personally as a result of her courage. She was fired from her job as a seamstress at a department store, and received death threats. She moved to Detroit, where she lived out her days, and penned her autobiography. During her time in the north, she found employment as a receptionist for John Conyers, the black U.S. Congressman who is currently Dean of the House, as the longest-serving member. She had a special interest in organising around the release of political prisoners in the US.

Even with legislation, desegregation was not an easy task. In 1957 nine black students sued for the right to attend an all-white high school in Little Rock, Arkansas. Their physical safety was in such imminent danger that President Dwight D. Eisenhower himself ordered the 101st Airborne Division to protect them. Only one of those nine subsequently graduated from the Little Rock Central High School.

Towards the end of the 1950’s, the NAACP youth council organised “sit-ins” of segregated drug stores. These campaigns were largely successful, with the targeted establishments changing their rules within weeks. Those participating in these actions in the southern states were met with heavy handed police methods to remove them.

These actions spread to libraries, parks, beaches, theatres, and other public amenities. They evolved into “freedom rides,” where activists travelled on interstate buses to test the ruling of Boynton v. Virginia, (1960), which found that segregation was unconstitutional when crossing state lines. These were again met with violence: for example in Anniston, Alabama, one such bus was firebombed on Mother’s Day 1961. After many incidents where demonstrators were brutally attacked and imprisoned, public support for equal rights grew and grew. This spurred John F. Kennedy’s administration to order the Interstate Commerce Commission (ICC) to issue a new desegregation order. The ICC rule took effect on November 1, 1961, abolishing segregation of transport, terminals, drinking fountains, and bathrooms.

In August 1963 between 200,000 and 300,000 protestors marched on Washington and gathered at the Lincoln Memorial. Represented were a range of organisations, from black-led ones, to sections of the labour movement. It was here that Martin Luther King gave his famous “I have a dream” speech. Leaders met with President Kennedy after the march, when he affirmed his commitment to passing civil rights legislation. His assassination in November prevented that, but his successor Johnson picked up where Kennedy left off.
The movement then turned to a tactic of mass registration of black voters, to secure a voice within the establishment.

Speaking at Rosa Parks’ funeral in 2005, Condoleezza Rice said that if it had not been for Parks’ defiance in 1955, she would probably have never become the Secretary of State.(2) Indeed, it could be said that were it not for Parks, Barack Obama might not have been elected president.

However full equality has yet to be achieved, especially regarding the legal system’s treatment of blacks compared to whites. The NAACP website notes that African-Americans are jailed at six times the rate of white offenders; across the US, blacks are between three and 10 times as likely as whites to be arrested(3). Recent years have seen a series of apparently summary killings of black men, by police officers – for instance, that of Eric Garner in 2014 in Staten Island, New York, who died repeating “I can’t breathe” 11 times, as police held him in a prolonged choke hold. (See Headstuff’s Louisa Wright on this topic.) Furthermore it could be said that, like feminism, sections of the movement were co-opted, and have become part of the establishment they once challenged. Neither Rice nor Obama impeded American forces waging war in the Middle East, or eroded any of the institutional racism in their law enforcement system.

Maeve McGrath is an art historian and journalist. She tutored in art history at the University of Regensburg, whilst writing her doctorate there.

Exhibitions: ‘A Lonely Impulse of Delight,’ ‘Winter Treasures,’ and ‘Wrapped in Walls’