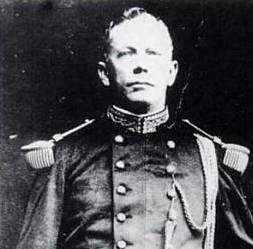 Lee Christmas was born on a plantation in Louisiana in 1863. His first job was as a pilot on the local tugboats, but by the time he was 16 he was working on the railroad in Mississippi. For the next twelve years he works on railroads across America, laying rails and working in stations until he became a fireman and, finally, an engine driver. He drove a train between Memphis and New Orleans and doubtless thought that this was his life now, until one fateful night in 1891 when he ran a red flag and collided with another train. He may have been drunk, or he may simply have been working a long shift (some stories say 54 hours). The latter could explain why he was never charged for negligence, though he was blackballed from the railway trade. He was forced to work as a manual labourer across the Southern USA until 1894, when a shortage of trained railway engineers led to an amnesty on formerly blackballed employees. Christmas immediately applied, but was shocked when he failed the physical. Apparently one thing he’d never realised all his life was that he was colour blind.

Disheartened by this failure, he decided to leave the USA. His later story was that he walked onto the first passenger ship he saw in the New Orleans docks and when he was spotted by the purser he asked to buy a ticket to the first foreign port on the voyage. Whether it was by chance or choice, he wound up in Honduras. There he discovered that hiring practises were more lax, and a man with his level of railway experience had not trouble finding work. He spent two years hauling ice south and bananas north, until one day when a group of armed rebels ambushed him. They commandeered not just his train, but also him to drive it. Left with no option but to comply, Christmas decided to make the best of it. He made some crude plate armour for his cab, and set out some sandbags on the flat car behind the train for a group of marksmen to set up and cover the sides. However just as they were about to set out, government troops appeared and attacked the town. The rebels were forced to set up a crude barricade (using the huge ice blocks that Christmas had been transporting), and he was handed a gun.

It’s said that you never really know who you are until the right situation comes along. There’s no record of Christmas ever getting into a fight or firing a gun before, and he’d certainly never been put into a battle situation. It would have been easy for him to simply hide in his armoured car, wait for the battle to end, and then either congratulate the rebels or explain how he had been kidnapped to the government troops. But when the guns started firing and the soldiers charged the barricades of ice, something inside Lee Christmas changed forever. Christmas ran forward and began firing on the oncoming troops. As he did so, a lucky shot felled the enemy commander, and the soldiers immediately routed. Whether it was Christmas who fired the shot or not, the rebels took his intervention as what turned the tables for them. And just like that, the train driver became a captain in the army of rebels seeking to conquer Honduras.

The rebels managed to take control of the north coast, with the aid of Christmas’ armoured train. Eventually they were defeated by the Honduran army and the survivors, including Christmas, fled to Guatemala. Guatemala had sponsored the revolution, and was prepared to bankroll a second roll of the dice. Christmas, as a US citizen, was sent to New Orleans to buy guns to arm the revolutionaries. As soon as he got there he embezzled the money and set about living it up. When the money ran out, a new opportunity beckoned – a job working for the same Honduran government he had previously fought against. In 1899 he joined the Honduran army. By 1902 he was a Colonel, and Head of the National Police as well. His talent was clearly more than enough to overcome his foreign origin.

The reason for this hiring of new blood was pretty simple. The president, a man named Terencio Silva, had decided that he wasn’t going to stand down at the end of his term but would instead try to make himself a dictator. He clearly hoped that a foreigner like Christmas would be more willing to back him up. In this, however, he was mistaken. Christmas had become friends with an army general named Manuel Bonilla, who had previously been the vice president. Bonilla had control of the army and Christmas had control of the police. More importantly, the men were able to reach an agreement with the American company United Fruit to ensure that the supply of cheap bananas to the US market would not be affected. In 1903 the two men led a successful rebellion against Silva and forced him to flee to El Salvador, where he died in exile four years later. Bonilla made himself president, while Christmas became a general.

For the next three years Christmas led a pretty good life, until 1906 when an invasion by Nicaraguan troops fighting alongside Honduran rebels threw Bonilla out of power. Christmas was captured leading his army, but his execution was commuted to exile when his spirit impressed his captors. When he was asked for a last request he asked not to be buried, but instead left out for carrion birds to eat. His dumbfounded captors asked why he would want that, and he replied “I want them to eat my body so they will fly over your camp and dump shit on your heads”. True or not, the story became part of the legend of Lee Christmas. Exiled, he went back to his former sanctuary of Guatemala. There he became head of the country’s secret police, but he was constantly looking out for ways to get his friend back into control of Honduras. In 1910 he found exactly what he needed – a self made millionaire named Sam “the banana man” Zemurray.

Sam was a Russian emigrant who had come to America in 1891 aged 14. At age 18 he had entered the banana trade, and had started his fortune when he realised that the bananas which were discarded in New Orleans as too ripe to survive the train ride north could be sold locally instead. By the age of 21 he had made over $100,000 which he invested in banana plantations in Honduras. Unfortunately for him the US government (who effectively controlled the Honduran government at the time) were about to set a high tax on exports of bananas from Honduras in order to have the country pay off its national debt. This would force Sam’s prices above those of his competitors, United Fruit. They sourced their bananas from Guatemala, and had such a tight control over the country that they hardly had to worry about taxes at all. Sam was thus highly motivated to sponsor a regime change in Honduras, and so he hired Christmas to put Bonilla back in charge. The fourth man in the conspiracy was Guy “Machine Gun” Molony. As his name would suggest, he was an expert in the new weaponry. He had been born in New Orleans but had fought as a mercenary for the British in the Boer War, before returning to New Orleans and setting up as a local gangster. The group met at a brothel in New Orleans to throw Secret Service agents off the trail, before heading down to the docks and setting sale for Honduras. As they went Christmas joked that Bonilla was the first man to go “from a whorehouse to a White House!”.

The men rendezvoused with an army of 1600 mercenaries on the coast of Honduras and set off on a march for the capital. Christmas’ forces read like a Who’s Who of international mercenaries – as well as him and Molony there was Emil Holmdahl (who fought alongside Pancho Villa and may have stolen his skull, Sam Dreben, Tracy Richardson, and Edward “Tex” O’Reilly. All had experience with machine guns, and several would go on to become war heroes in World War I only a few years later. Christmas is credited with inventing the notion of interlocking the fields of fire of the machine guns to create a “killing zone” that no enemy could pass and live. It was due to his leadership and the experience of his men that, despite initial setbacks, the mercenary army won the key Battle of Le Ceiba on the 25th of January, 1911. At this point the US army sent in the Marines to force a cease fire. There was no way to stop Bonilla taking power without getting into an armed confrontation the Americans were unwilling to engage in, and so they agreed a process were the current president would step down, and Bonilla would become president by the end of the year. In retaliation for his role, they officially stripped Christmas of his US citizenship.

Sam got his low taxes (and later went on to first sell out to United Fruit, and then buy them out after their stock price tanked). For Christmas though, the rewards of victory were shortlived. Bonilla made him a general in the Honduran army, but the following year he died and Christmas was forced to leave the country. He floated around South America, occasionally employed by Sam Zemurray to threaten the locals. In 1917 he was made chief of the “Sanitary Police” in Guatemala City, after two large earthquakes demolished it and left anarchy in their wake. When America entered the First World War Christmas (who had managed to regain his US citizenship) volunteered to go and serve in Europe. The State Department decided to use him in a different capacity however. As he had become effectively a celebrity in South America they actually hired him as a secret agent, to travel around the country and give them assessments on various military situations.

By 1923 Lee Christmas was sick with tuberculosis. He had managed to lose all his money somehow, and so he wrote to Guy Molony asking for help. Molony was, in an odd twist, the Chief of Police in New Orleans (heading up a department legendary for its corruption). He wired Christmas the money for a ticket, and so the general returned home to die. On January 24th 1924, a week or so shy of his 61st birthday, General Lee Christmas died. The New York Times gave him a full page (highly sanitised) obituary and he was buried in Lafayette Cemetery. His life naturally inspired many fictional versions, and even recently the character played by Jason Statham in “The Expendables” was named after the General. And yet, if he hadn’t run that red light, or if he hadn’t been colourblind, or if he hadn’t decided to go to Honduras, then perhaps Lee Christmas would never have “seen the elephant”, and found out the type of man he really was.