Hachiko: A Symbol of Loyalty. 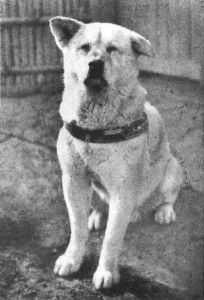 Side by side, their faces blurred,
The earl and countess lie in stone,
Their proper habits vaguely shown
As jointed armour, stiffened pleat,
And that faint hint of the absurd –
The little dogs under their feet.

So begins Philip Larkin’s An Arundel Tomb, a tribute to everlasting love. Fittingly he included the symbol of love and loyalty so widely recognised that it has been included on many a grave monument as a testament to the deceased – the dog. Not unlike his sculpted counterparts, Hachiko waited ten years after his master’s death for his return and even now his monument at Shibuya station, Japan, waits patiently and will continue to do so for many years to come.

Hachiko was born on November 10th, 1923 in the Akita Prefecture, from which his breed derives their name, near the town of Odate. He was found by Hidesaburo Ueno, a professor in the agricultural department of Tokyo University and not long after their daily routine was established Hachiko would see the professor off to work every morning and then wait at Shibuya station for his return every evening.

The pair became well known amongst the regulars at the station. When Hachiko was eighteen months old Professor Ueno died at work of a cerebral haemorrhage in the course of a lecture and so never returned to Shibuya station, where Hachiko was waiting. 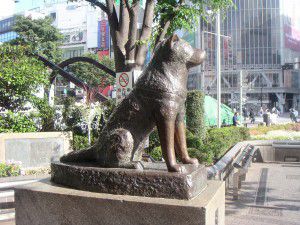 Hachiko was rehomed after Ueno’s death but he routinely escaped to search for his master at their old home. Quickly realising Ueno no longer lived there he changed tack and began to wait at Shibuya station; only arriving in the evening – when the professor’s train was due. Hachiko’s continuous presence attracted the attention of some of the commuters and those who recognised him as the professor’s dog began to give him snacks to keep him nourished and ensured his safety. This continued for ten years until March 8, 1935 when, aged 11, Hachiko died.

Hachiko quickly became a national symbol of loyalty and family love. Two traits excruciatingly important in Japanese culture and Hachiko’s importance as a national symbol can’t be over estimated. Every year on the anniversary of his death there is a ceremony held at Hachiko’s monument in Shibuya station. In 1994 the Culture Broadcasting Network in Japan went to huge length to lift a recording of Hachiko’s voice from a broken record. On May 28th of that year millions of people tuned in to hear Hachiko bark – 59 years after his death; a testament to his continuing popularity and cultural significance. 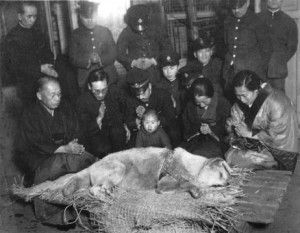 Hachiko also had tremendous significance for his breed, the Akita Inu. One of the Professor’s students began to observe HAchiko, which led him to publish a paper on the breed. He discovered that only 30 purebred Akitas, including Hachiko, remained. The attention thrown on Hachiko through the student’s publications revived interest in the breed and ensured their survival. Hachiko also helped bring the breed to America.

Helen Keller, the woman famous for achieving a Bachelor of Arts despite being deaf and blind, heard of Hachiko during a trip to Japan in 1937. She expressed her desire for such a dog and was presented with an Akita but he later died of canine distemper. However, the Japanese Government sent her an official gift of another Akita and through these two dogs the Akita was introduced to America. 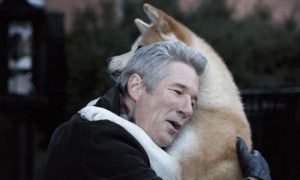 Hachiko’s story has begun to filter through to western society. In 2001 an episode of Futurama made reference to Hachiko in their depiction of Fry’s faithful dog. In 2004 Hachiko Waits was written by Leaslea Newman and won numerous awards. Most recently, in 2009, Hachiko: A Dog’s Story was released, starring Richard Gere. Many years after Hachiko’s death he is still a hero to many across the world, his story is still spreading and he is still used as an example of family love to all children across Japan. He is the proof of Larkin’s closing line: “what will survive of us is love”.

Review of ‘The Atlas Project’