Daniel rocking a cave with some lions. Nonchalant.
HistoryHumour FeaturesHumour

Basically everyone wants to know the future. Maybe not in small details, like when will I die? Or what will I have for dinner on the 5th of August 2017? Perhaps we don’t want to know about what becomes of our relationships and family members, better to live the life and all.

When will empires fall?

These are the kinds of things we want to know and I was disappointingly ignorant of the knowledge before this morning. I did not know that all this information is out there, all we have to do is follow the “blueprint”.

This great, important, genuinely mind-blowing knowledge came to me in the same way that all such knowledge does: an A4 junk mail brochure in the letterbox. “Ancient Discoveries, reveal the future” it informed me. Interesting headline, but of course, I’m a skeptic, so I was skeptical. It was an invitation to hear ‘international speaker’ Mark Finley* [speaking]. I was especially impressed by the confidence of the marquee name; they were so convinced that this guy’s name and his ability would sell the crowd that they didn’t need to confuse his name with all of his titles and degrees etc. Just ‘international speaker’ would suffice. Of course, I could go to Belfast and speak and I would also be an international speaker, but that doesn’t matter. This was Mark Finley!

Yes, that Mark Finley. The speaker for the Hope Channel International Television. The very man. He’s like Pat Kenny if Pat Kenny worked for God in Heaven as opposed to RTE in Ireland.

“You will be amazed at recent archaeological discoveries that confirm the truthfulness of God’s Word.” Amazed indeed. There’s picture of him crouching by some ruins. Amazing! “You will thrill at his clear, state-of-the-art, fully-illustrated presentations (Powerpoint with clip art, I’m guessing) that reveal the secrets of the ancient past and their meaning for our lives today!”

You can go and watch this guy talk in Dublin. Why wouldn’t you? Just look at some of the amazing lectures:

One: Lost Cities of the Dead. (Catchy title. Has a picture of Giza in Egypt, which I was previously convinced wasn’t lost. I’m learning so much).

Two: World’s future revealed in a dream. (This is truly fascinating; some king had a dream, and then he asked his clever servants what it meant, and they didn’t know, so he was going to kill every clever person in his realm – which I think we can all agree, is an under-reaction, in the circumstances – and then Daniel, one of the clever people found out he was about to be killed and then decided “oh wait, actually, yeah, I do know what your dream means”. And then he told the king about all the limbs and metals and the empires they represent, and what it means and it was INCREDIBLE!)**

Three: Jesus, Jerusalem and the end of the world.

Looking out from Jerusalem the world seems to be facing disaster. Is there hope in Bible prophecy? (Jerusalem has been surrounded by disaster for 3,000 years. It’s the Holy Land! Of course there has to be consistent killing and trauma).

Four: The Child who will change the world. (This talk promises to change your life. Spoiler, it’s about a guy called Jesus).

If God is love why do bad things happen to good people? The answer: a Star Wars battle in the book of Revelation. (I promise you I am not making this up).

Six: Hope Beyond Tomorrow. (That Jesus guy said he’s coming back in 2000 years, so we better have the place spick ‘n’ span. Are we on the edge of eternity? Mark Finley asks. I’m telling you now, if Jesus appears from behind a curtain during this talk I’m going to lose my shit). 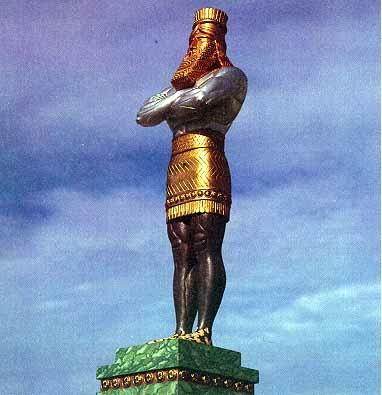 ‘The prophet Daniel predicted the rise and fall of nations, 2,500 years in advance. History has been following his prophecies like a blueprint. The state of Europe today specifically reveals the accuracy of his predictions.’

Now, you might think of a blueprint as a detailed outline of a building, a technically drawn plan with specific details and exact calculations for constructing something. Am I right? Of course I am, you’re so predictable, modern human. Why can’t a blueprint be something greater? For example why can’t your precious “details” just be a ram’s horn? And your “technical drawing” be another horn? And your “exact calculations” be, for example, another horn? And why shouldn’t Daniel, this man who claimed to live 1,500 or so years before he did, decide what each of these horns represent? One is obviously Persia, and one is obviously Greece. Don’t be foolish, it’s so clear that the horns on the ram’s head are nations… except this next horn, which is more powerful than the other horns, this horn is one man: Alexander the Great. Obviously! How could it not be? And he smashed those other horns and oh no here comes a new horn and oh shit Europe is going to crumble in 2015! Feck. We should have paid more attention.

Check out this other prophecy by Dan the Man:

‘Daniel disclosed the main theme of the dream- the colossal image composed of a head of gold, breast and arms of silver, belly and thighs of bronze, legs of iron with feet of iron mixed with clay. This composite statue was then reduced to powder by a huge stone, and the powder was blown away by the wind. Where the image had stood, the rock grew to the size of a mountain and filled the earth.’

You might not be able to see this as the damning picture of today’s world that it is, but Daniel could 2,500 (or so) years ago. The King Nebuchadnezzar of Babylon dreamed this statue thing and Big Dan told him that the Head of Gold represented the king himself. The king would like to hear that, I’m sure. He told him that the arms of silver were the joint kingdoms, the ‘inferior’ Meso-Persia. The King would probably like to hear that too. And that it makes sense because this statue, unlike most humanoid statues had two arms. So, that’s cleared up the dual kingdom quite nicely. It does so at the iron legs too, because those legs are Rome (Rome will come in the future Daniel told the King), and as we know, Rome eventually splits in two, an east and a west, so, the statue has two legs. Clever dream. It goes all the way down to the toes, which are smaller little bits, this implies no one great power, but a federation: that’s Europe, and you know what happens next? ” This composite statue was then reduced to powder by a huge stone, and the powder was blown away by the wind.”

So, yeah, we’re all fucked.

I think I’ll have to go and see these talks. They’re on this week in Dublin.

*He also brings his wife Ernestine and let’s her speak some stuff too. You should respect her authority, she wrote a cookbook. And she’s “popular”.

**Don’t worry that this book was written after all these events unfolded, this is a prophecy about the future, deal with it.