Dublin’s Whitefriar Street Church is home to one of the most popular modern Saint’s: Saint Valentine. A shrine dedicated to the Saint has pride of place in the church and his remains are put on display every February 14th, but how though did this Italian Saint make his way to Dublin?

Religious relics have long been an important part of the Christian tradition. The word “relic” is derived from the Latin word “Reliquus” which means “left behind”. A relic is a physical or personal memorial of a Saint or religious figure. In Catholic doctrine first class relics are those which are directly associated with Jesus’ life and the physical remains of a saint, with a body part being particularly highly prized. A second class relic is an item that was worn or frequently used by the saint and a third class relic is any object that has been touched by a first or second class relic. Therefore in these terms the relic of Saint Valentine held in Whitefriar Street Church is a prized first class relic as Dublin is home to some of the saints’ blood.

During the Middle Ages there was a boom in the popularity of religious relics as churches and religious institutions vied to be associated with the most holy items they could find. Relics were thought to act not just as a reminder of the life of the martyred but also to help guide worshippers to God. As a result of this competition, churches began to create their own relics. At one point the ardent traveller on pilgrimage could seek out the head of John the Baptist, Jesus’ foreskin and doubting Thomas’ finger. Even though the sale of relics was forbidden under Canon Law the industry continued to thrive until the effects of the Reformation rippled across Europe. A side effect of this is that it became harder to authenticate relics. When there are seven different churches claiming to have the head of John the Baptist it becomes increasingly difficult to decide which was genuine.

The origin of Saint Valentine is still debated as few facts have survived the centuries. In the third century AD a priest called Valentine was executed by the Roman Emperor Claudius II outside the Flaminian Gate on February 14th 269. Other sources suggest the date could have been 270, 273 or 280. He was then buried on the Via Flaminia to the north of Rome. Valentine was martyred for his Christian faith. The Emperor had decreed that his soldiers would be better warriors if they remained single and unmarried. However Valentine courted danger by secretly marrying couples in Christian ceremonies. At one point the ardent traveller on pilgrimage could seek out the head of John the Baptist, Jesus’ foreskin and doubting Thomas’ finger. The Catholic Church also argue that at the same time Valentine developed a relationship with the Emperor in order to encourage an interest in Christianity. It is also important to note that polyamory was relatively common in Rome at this time and Valentine’s actions were going against the norm. Claudius eventually became enraged at the flouting of his rules and gave Valentine a choice: renounce his faith or be beaten with clubs and beheaded. He refused to renounce his faith and was executed. Like most saints he is venerated for his dedication to his Christian beliefs, even though it resulted in his death. 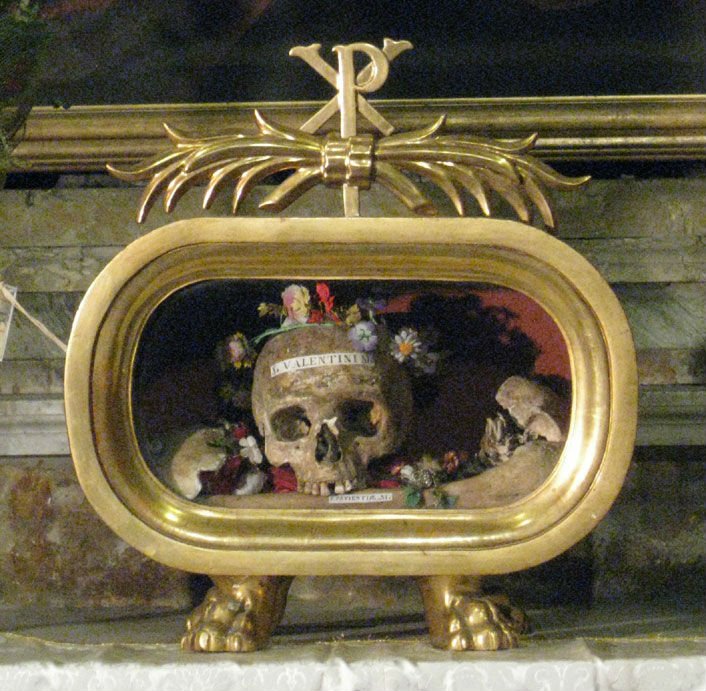 Archaeologists have unearthed a Roman catacomb and an ancient church dedicated to Saint Valentine which some argue proves his existence as an early pioneer of Christianity. In recognition of his martyrdom in 496 AD Pope Gelasius marked February 14th as a day to celebrate the now Saint Valentine. This came at a time when Rome was still trying to establish itself as the centre of Christianity and it is likely that part of the reason for this was to overpower the pagan, and decidedly non – Christian, celebration of Lupercalia which had been celebrated on the 13th – 15th of February.

Over the centuries his bones have been scattered across Europe. While the flower – crowned skull has long been a resident of the Basilica of Santa Maria in Cosmedin, Rome, his relics were exhumed from the catacombs of Saint Hippolytus on the Via Tiburtina. They were identified as belonging to Saint Valentine. Originally the Saint’s relics were housed in the Church and Catacombs of San Valentino in Rome before being transferred to the church of Santa Prassede.

In 1835-6 Father John Spratt, a renowned preacher and Irish Carmelite visited Rome where he was well received by the Roman elite. He was gifted a small vessel tinged with Saint Valentine’s blood, presented to him by Pope Gregory XVI. The vial was transported for a special Mass dedicated to those young and in love, eventually arriving in Dublin on November 10th 1836. The reliquary (shrine) was received by Archbishop Murray of Dublin. It was decided they would remain in Whitefriar Street Church; a popular church in the centre of Dublin. After the death of Father Spratt in 1871 interest in the relics diminished and they were placed into storage. 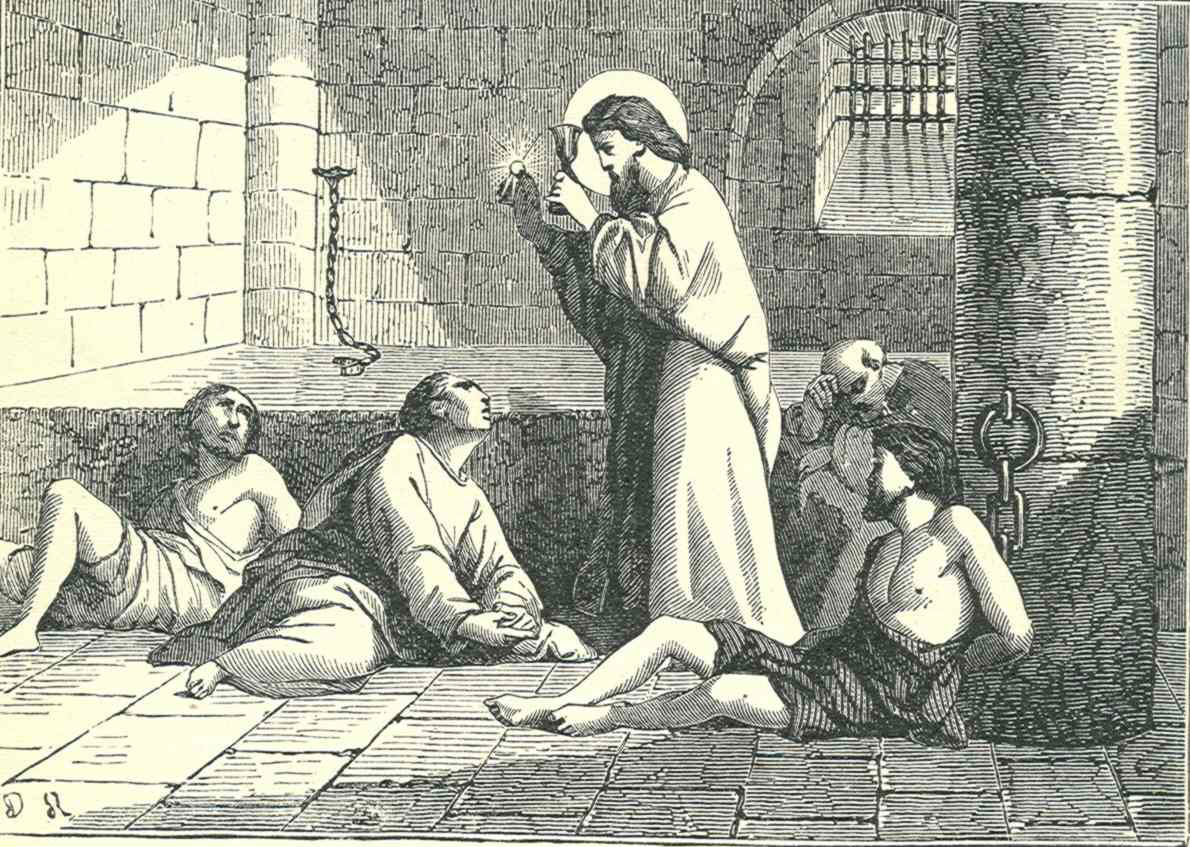 Major renovation works to the church in the 1950 – 60s led to the rediscovery of the relics. They were then placed in a specially built altar and shrine. The Catholic Church was still in its zenith in Ireland at the time and it is likely that the relics would have been considered a bonus attraction for the popular city centre church. Due to the limited information available about the life of Valentine the Roman Catholic Church removed him from the General Roman Calendar in 1969. However he is still recognised as a Saint and remains very popular. At present the remains are kept under lock and key but lovebirds can pay them a visit each year on February 14th when they are placed before the church’s high altar and venerated at the Masses. This is one of the few religious connections to Saint Valentine that remains.

However Dublin doesn’t have the only claim to Valentine. In 2003 other alleged relics were found in Prague at the Church of Saint Peter and Paul at Vysehrad. Fragments of his skull are to be found in a silver reliquary in the parish church of Saint Mary’s Assumption in Chelmno, Poland. Alleged relics of Saint Valentine also lie at the reliquary of Roquemaure, Gard, France; in the Stephansdom Cathedral, Vienna, in Balzan in Malta, in Blessed John Duns Scotus’ church in the Gorbals area of Glasgow, Scotland and also in Saint Anton’s Church in Madrid. They (allegedly) arrived in Madrid as a present to King Carlos IV from Pope Pious VI. The relics have been on display since 1984.

Many of the remains have been placed on more prominent display in the twentieth century. Arguably this has little to do with their religious connections and more to do with attracting tourists. However it is possible that in this increasingly secular age people value the physical manifestation of their faith more and more. And of course the fact that there is an interesting story behind it cannot hurt. As Valentine’s Day becomes both increasingly commercial and derided it is possible that many seek a more ‘authentic’, physical experience of devotion and love. For some these remains symbolise the importance of marriage and of sanctifying your relationship in front of God. 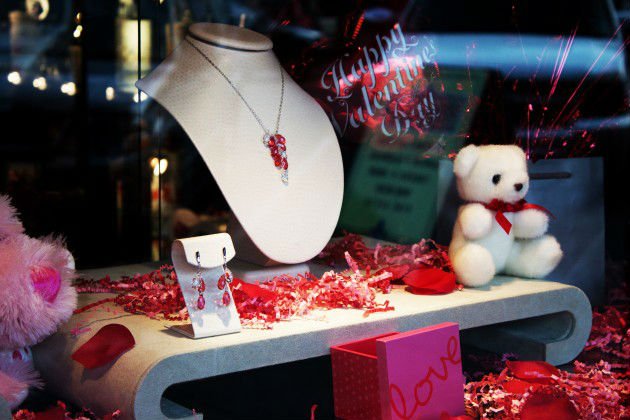 In an interesting twist at the same time that visiting the remains of Valentine has grown in popularity, so has the desire to rebel against the view of love and profit that has come to define February 14th. This is perhaps best typified by the fact that divorce filings arise by around 40% this time each year with The Webb Law Centre in Charleston, USA, offering one lucky (or unlucky depending on your point of view) couple a free Valentine’s Day divorce. Running for eight consecutive years the person who presents “the most compelling story” and has the fewest complications wins.

The spread of the remains across Europe highlights the continuing popularity of the Saint but also the desire individual churches have to be associated with something so holy, a direct physical link to the early years of the church. Further it shows a continuing appetite among the public to be able to see and visit the dead saints that over time have become a part of their cultural and religious narrative. In some cases there are also more nefarious attractions to the relics. One of the reasons that the Valentine reliquary is kept under lock and key is because of the fear of theft. Several religious items have been stolen in Ireland over the past few years. In October 2011 decorative crosses, made from bronze, silver and gold were stolen from Holy Cross Abbey in County Tipperary. They were said to contain fragments of the cross on which Jesus was sacrificed. In March 2012 the preserved heart of Saint Laurence O’Toole, the patron Saint of Dublin, was stolen at night from Christ Church Cathedral in Dublin. It seems that for one reason or another relics have, and are likely to, retain their popularity and importance in modern Ireland.

Laura Marriott is a Dublin based writer, historian and theatre critic. Find her at www.lauramarriottwriting.wordpress.com or follow her on twitter @lauramwriting.