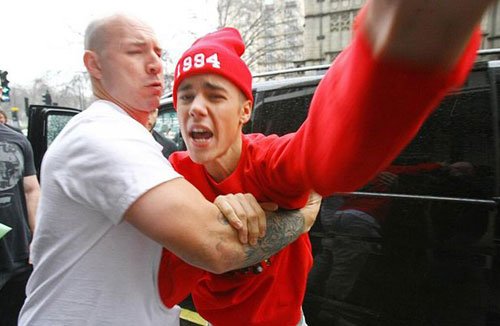 It seems I can’t open a newspaper or magazine these days without seeing a picture of Justin Bieber fighting with the paps or reading about the romantic antics of One Direction’s Harry Styles.

The tattooed Harry Styles who likes hanging out with older women and Justin Bieber who likes getting arrested for drag racing in his Lamborghini are the teen idols of today. They are what the majority of modern teens adore but the likes of Bieber and Styles are a long way from the original teen idols. A hell of a long way, indeed!

Frank Sinatra can be defined as the first musical teen idol whose rise in the 1940s coincided with that of the twentieth century teenager. If you were a teenage girl who followed jazz and swing in the 40’s then you were termed a ‘Bobby Soxer.’ Today we may have Directioners and Beliebers but all those years ago the hyperactive screaming troupes of teenage girls sported long socks rolled right down to their ankles and devoted their undying love to the likes of Sinatra.

Towards the end of the 1940s, the teen market was expanding and Pat Boone started attracting attention from it. Boone strayed away from the swing music Sinatra was renowned for and instead he stepped into the rock and roll scheme of things with cover versions of songs originally sang by black artists such as Little Richard and Fats Domino.

Boone’s sway into early rock n roll did not damage his clean-cut image and perhaps that is why he was second, only behind Elvis Presley, as the biggest selling artist of the 1950s.

Elvis had something Boone didn’t have and that was the danger factor. It was something that turned masses of teenagers into his adoring fans. Elvis was reviled by the parents of his teenage fans, but worshipped by them as the new teen idol.

Elvis had the hair, the good-looks, the tan, the voice, the moves, he had it all. He set the bar for future teen idols with a fan base that caused near mayhem at his concerts.

Teenagers became a growing presence in the music market and needed to be catered for, so the Simon Cowells of the 1950s decided to manufacture teen idols in order to satisfy the growing sector of hyperventilating teen girls.

Paul Anka was one such product of 1950s musical fabrication aimed at the teenage market. His safe image was matched with that of Tommy Sands who became a teen idol overnight when he appeared on the 1950s version of the X-factor; ‘The Singing Idol.’

Frankie Avalon was already a well-known face by the time he was twelve, but as he ventured into his teenage years he was seen by music moguls as the right face at the right time and place.

In December 1959 Avalon’s song ‘Why’ went straight into the number one spot on the billboard chart and became the last number one of the 1950s.

Bobby Rydell had played alongside Avalon throughout the 1950s as a drummer in his band, but by the time the 60s arrived, Rydell was making a name for himself as yet another teen idol with several hits such as ‘Wild One’ and ‘Volare.’

Ricky Nelson cut an image of a younger and safer version of Elvis in the 1950s with his rockabilly sound, but if Twitter or TMZ had been around back then we would have heard rumours of drug use and seen images of him stumbling out of all night parties wasted.

While Ricky Nelson portrayed a public image of a clean-cut teen idol, the 1960s would see a newer version of teen idols who couldn’t give a fuck about their public image.

The 60s saw America come under the spell of the British invasion and the likes of the well-respected Frankie Avalon and the harmless Pat Boone were trumped by the rebellious Rolling Stones and seditious Beatles.

The Stones and The Beatles caused a thunderstorm of teen furore in the 1960s. Crowd trouble was nearly always a problem at their concerts while drug use and wild parties among these new teen idols was well known.

While Mick Jagger and John Lennon stomped their way through the American music scene, other British artists followed suit, bringing with them a new form of stage presence.

These guys from Britain were brash and brazen but over all they represented the rebellious atmosphere that streaked through the 60s.

The Troggs hit the big time with ‘Wild Thing’ while The Who hoped they would die before they get old in ‘My Generation.’

The image of the typical albeit mundane teen idol was being hijacked by these long-haired anti-authoritarian rock n rollers from Britain and this was causing the smooth, solo-singing, clean-shaven teen idol to become a thing of the past. It was now a case of a fight back from the American music industry who set in motion a counter action with their own safer bands for the teen market.

To counter Beatlemania, America produced Monkeemania. The Monkees were a purposely created group styled on The Beetles but without the controversy or drugs. They would be the beginning of a long line of American TV musical groups. The teen idol spectrum was swinging back into the safety net of U.S manufactured ways.

When the Monkees eventually disbanded at the dawn of the 1970s, another manufactured teen idol led band would take their place.

The Partridge Family became a staple in the teen world of the 70s and Keith Partridge, played by David Cassidy, would become a fixture on many a teen girls’ radar.

The dangerous hype which had affected teen idols performing live in the 50s and 60s didn’t wane in the 70s and one such incident cemented that fact in 1974 when a teenage girl was killed in a stampede at one of Cassidy’s concerts in London while up to 600 people were hurt. After that he started to veer away from music and shaped out a career as a full time actor.

To rival David Cassidy as a teen idol in the 1970s there was Donnie Osmond. With songs such as ‘Puppy Love’ and ‘Go Away Little Girl’ Osmond became an instant sweetheart for many teen girls. With his religious background and hatred of profanity, it seemed like America had got back its crown as producer of the original flawless teen idol.

The 1980s would see the foundations being laid for a boy band movement which would take off in the 1990s. New Kids On The Block became one of the first forged boy bands to emerge from the 80s. Like many a boy band to follow thereafter, each member would be moulded into a distinct personality. For example there would be a talented one who would usually be the lead singer, a buff one with a six pack, a wild one with an eye for the ladies and a shy quite one that your parents would approve of.

Following on from NKOTB there was the Backstreet Boys and N*Sync. Meanwhile the British and Irish music scene was being slain by another boy band revolution by the likes of Take That and Boyzone.

At the turn of the millennium boy bands grew into man bands so a new vacuum had to be filled for the teen market and this is where Disney stepped in.

Zac Efron kicked off the start of a new wave of teen idols when he starred in High School Musical. Unlike many teen idols of the past he successfully broached out of that stereotype and has since been carving out a successful acting career.

The Jonas Brothers also emerged from the bulging Disney machine of the 2000s but it has been the likes of Justin Bieber and One Direction who have taken today’s crown of teen idol supreme and until their celebrity status wanes and their fan base grows old, they will be teen idols for some time to come, because after all, growing old is mandatory but growing up is optional!

Retro Gaming – an interview with the obsessed.

Does Recreational Cannabis Change the Brain in Young People?