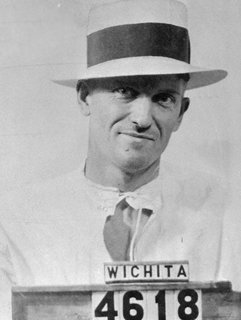 The 1930s were a violent time for crime in the United States. While some might claim the Wild West period ended decades earlier, bank robbers like John Dillinger and Charles “Pretty Boy” Floyd made a mockery of the rule of law, frustrating attempts to civilise the rural frontier even in these more overtly lawful times. It was this turmoil that led to the formation of the Federal Bureau of Investigation, and it was quick to claim the scalps of Dillinger, Floyd and dozens of others. Absent from the list of victories it touted was the first man to die at the guns of the Feds – Wilbur “Mad Dog” Underhill. The reason for that is simple – they shouldn’t have had those guns at all.

The man who would become known as the “Tri-State Terror” and the “Southwest Executioner” was born in Joplin, Missouri in 1901. His birth name was Henry Wilber Underhill, named for his father who died when he was only 10 years old. The spelling of Wilbur was one he insisted on later, as he felt it was somehow a more manly name. The poverty that his father’s death left the family in drove Wilbur and all three of his brothers into crime, and when Wilbur was twelve his older brother Ernest was convicted of murder and sent to prison. Some say that Wilbur’s own wild streak began at this time, while others point to a childhood accident when a carelessly thrown crate of bottles caught the young boy on the head while he was scavenging in bins for food. Whatever the cause, Wilbur soon decided that being a criminal with a full belly was preferable to starving to death honestly.

His first recorded crime was burglary, breaking into a home in his neighbourhood and stealing the silverware. Though he was found with some of the stolen property, he claimed to have been given it and for lack of any direct evidence he was let go. When he tried his hand at burglary again though, he was caught. This time the charges stuck, and in 1918 he went to prison for the first time. He was released in 1922, and immediately graduated to armed robbery. He specialised in attacking parked cars in isolated areas, and so became known as the “Lover’s Lane Bandit”. His pattern was too predictable, however, and a police sting soon resulted in his capture. He was sent to prison again, for a sentence of five years. There are stories that he tried to tunnel out of the prison, but if so he wasn’t detected. In 1926 he was released on parole, though as would soon be demonstrated he was far from a reformed character.

On Christmas day 1926, Wilbur and Ike Akins, known as “Skeet”, walked into a drugstore in the small Oklahoma town of Okmulgee. They robbed the store at gunpoint, and in the course of the robbery Wilbur murdered a teenager named George Fee. It was his first recorded killing, but it wouldn’t be his last. The two criminals were swiftly tracked down, and two weeks later on the 7th January they were arrested. They were held in Okmulgee jail, along with two other bandits, “Red” Gann and Duff Kennedy. The other two also had blood on their hands, having killed a man who tried to run away when they robbed him. Facing a stiff sentence, the four men decided to escape. Somehow they got hold of hacksaw blades and on the 30th of January they sawed their way out of their cells, then through the bars of the jail window. After lowering themselves down on ropes made of blankets, the four men robbed a nearby garage of both cash and a getaway vehicle. Wilbur was spotted a week and half later robbing a movie theatre in Picher [1], but he shot and killed a deputy before escaping. He was eventually recaptured on the 20th of February. On the 3rd of June he was sentenced to life imprisonment, and sent to the Oklahoma State Penitentiary to serve his sentence.

With no prospect of parole, Wilbur was far from a model prisoner. He tried several times to escape, and eventually succeeded four years into his sentence. Once loose, he robbed a theater and bought a car, then recruited his nephew Frank as an accomplice. The two robbed a gas station, but got less than twenty dollars. To add insult to injury, while they were making their escape Wilbur crashed his new car into another vehicle, and the damage was extensive enough to render it undrivable. They were forced to return to the hotel nearby that they’d been staying in. They were still there the next morning when Detective Merle Colver knocked on their door. Colver was a respected local lawman, who had twice ran for sheriff, and he was checking up on suspicious hotel guests after the reported robbery. He may have recognised Wilbur, as a picture of the escaped criminal was later found in his pocket. Colver asked the men several questions, and then began poking around their hotel room. When he nearly discovered Wilbur’s gun beneath a pillow, Wilbur rushed at him and grabbed the weapon. Colver tried to fend him off with his billy club, but Wilbur shot him three times, killing him. The two men fled. Once Colver’s body was discovered, a manhunt was kicked off that located the men ten hours later. Frank surrendered, but Wilbur tried to fight it out. One deputy shot him in the arm, and when he tried to flee another shot him in the neck. Wilbur survived, but he was sentenced to life imprisonment – this time in Kansas State Penitentiary. Frank was controversially found not guilty, as the court decided he had been caught in his uncle’s spell and had not committed any of the crimes. Scared straight, he would thereafter lead an honest life.

On May 30th, 1933, Wilbur managed his biggest escape yet. This was no mere over the wall job – Frank Nash, a friend on the outside, managed to smuggle in four pistols. With them Wilbur and at least seven other inmates (possibly up to ten, reports vary) managed to take the Warden and two guards hostage while the rest of the prison was distracted by a baseball game. With these hostages they persuaded the guards in one watchtower to surrender, then used a rope ladder they had made in the prison workshop to get to the ground and freedom. Once they had made it a safe distance away Wilbur wanted to kill the hostages, but instead Harvey Bailey, famous for stealing a million dollars from the Lincoln National Bank, decided to let them go with just enough money for bus fare back to the prison. Despite this difference of opinion the two men hit it off, and decided to form what became known as the Bailey-Underhill gang together, along with several of the other escapees.

The debt that Bailey and Underhill owed to Nash for his aid in their escape was well known, and so when a violent attempt was staged two weeks later to rescue Nash from FBI captivity they were considered most likely to have attempted it. In fact neither man was involved in what became known as the Kansas City Massacre. [2] The massacre left Nash, three policemen, and one FBI Agent dead. As a result the FBI began arming itself, even though it would not officially be allowed to do so until the following year. Unofficially the FBI got hold of a shipment of Thompson submachine guns, better known as Tommy guns, that had been sent to the army for evaluation as wartime weapons. With this dubiously sourced arsenal they went hunting the Bailey-Underhill gang.

Bailey was actually caught up in a net for a different crime. While visiting another criminal, George “Machine Gun” Kelly, Bailey was arrested in a raid. Kelly had kidnapped a wealthy businessman, and in the wake of the Lindbergh Baby case kidnapping had been made a federal crime with a mandatory life sentence. Unfortunately for Bailey he had been given $500 by Kelly to settle a debt, and those bills were from the ransom money. As a result Bailey was imprisoned and sent to Alcatraz. With him gone the brakes were off Underhill, and he and the gang went on a murderous spree of bank robberies. The authorities seemed powerless to stop him. And then he got married.

It was not the first time Underhill had got married. In fact it was the fifth, though he had never gone through the formality of ending the others. He had a reputation for not believing in sex before marriage, an odd code of ethics when combined with his bigamy. On this occasion the girl he married was Hazel Hudson, and in marrying her he made two mistakes. The first was putting his real name on the wedding certificate, and the second was in putting his wife’s real address. When word reached the FBI of his marriage they staked out her house, and though the couple inadvertently gave them the slip the G-men were on the trail. They had an ace in the hole, too – a member of the Underhill gang was actually an FBI informant. He let them know Underhill was sick, and so they canvassed doctors in the area they thought he had headed to. One of them pointed them to Eva Nichols, girlfriend of a gangster named Ralph Roe.

When the FBI realised that Underhill and his new wife were staying at Nichol’s cottage in Shawnee, they surrounded it. Underhill heard their dogs barking and went to a window to investigate, and at the sight of him one FBI agent fired a tear gas cannister. Underhill responded with bullets, and the FBI were more than ready to return fire. Some had shotguns, but most were armed with the Thompson submachine guns they had commandeered. All told they fired about a thousand rounds into the small cottage. Roe was injured too badly to escape, while Nichols was killed. Her death, due to the unsanctioned use of weapons, may well be part of the reason why this story is not often repeated by the FBI. Wilbur was also injured, taking around 13 hits. He broke out through the lines and into a cornfield. There they lost track of him, but the full-scale manhunt soon tracked him down to a secondhand furniture shop. He had crept into one of the beds in the store, and was discovered to be mortally wounded. They transported him to prison and tried to save him to stand trial, but it was too late. On the sixth of January the “Mad Dog” died of his wounds. His last words were:

Images via Babyface Nelson Journal except where noted.

[1] Picher was a lead mining town – up until 1996, when the terrifying amounts of lead the citizens were exposed to caused the government to buy up the town and abandon it. Now it sits empty.

[2] The truth behind who perpetrated the massacre was never definitively established. While the most likely suspects were either arrested or killed by the FBI, one theory maintained that the attack was actually a hit on Nash sanctioned by mob bosses who feared he would reveal too much to the Feds. However FBI files revealed that Nash himself was actually killed accidentally by one of the FBI agents returning fire on the attackers.

The Indestructible Men – Breaking Bad, House and the Superhuman Protagonists