“The Kinks, The Riff, The Road: The Story” 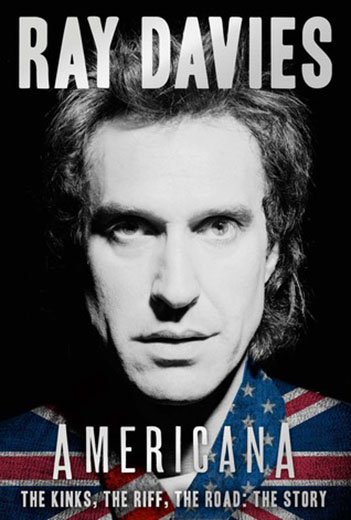 As the lead singer, songwriter, and rhythm guitarist of one of the greatest bands of all time, The Kinks, Ray Davies’ has always had a unique and interesting take when it comes to his observations on music, life, and people. Even though he’d released an “unauthorized autobiography” titled “X-Ray” back in the 1990s (a book I must dig out and read again as it’s been too long!), he never really had a proper memoir. His new book, “Americana,” is subtitled “The Kinks, The Riff, The Road: The Story” and seems to promise to fill that void.

While there have been many books written on the Kinks, including the newest biography that I recently reviewed, the heart of the Kinks’ story has always been the relationship between Ray and his brother Dave. However, an equally important part of the Kinks’ career story is their relationships with both their home country of the UK and the country of their greatest successes, the US. While they were huge in the UK in the 1960s and part of the original British Invasion of America, by 1965 after a chaotic American tour, they found themselves mysteriously banned from these shores for four years. While they continued to make brilliant albums and cultivated a dedicated cult following in the US, they were forbidden from playing American concerts until late 1969 when the ban was lifted. From that moment on, Ray and the Kinks spent all of their effort reclaiming the lost years of success in America and toured relentlessly in the US, to the detriment of their career back home. However, by the time they broke up in 1996, the Kinks were one of the biggest British bands of all time in America. Ray, like others of his generation (John Lennon, Paul McCartney, Pete Townshend, Mick Jagger, Keith Richards, Jimmy Page, Eric Clapton, etc) grew up in post-War Britain enthralled by American culture and music from a young age (contrast this with the seething disdain 1990s British musicians like Damon Albarn, Brett Anderson, Noel Gallagher, Jarvis Cocker, etc. slung at the US while, ironically, idolizing the 60s musicians at the same time). The heart of this book, Americana, is Ray’s fascination with the country and the story of the Kinks as told through their experiences here.

Unlike other Kinks biographies, Americana almost completely ignores anything to do with Ray or the Kinks in the UK and instead jumps from the 1965 ban to their return to America in 1969 through the remainder of their career, which was spent touring from coast to coast and building up a huge and dedicated following that continues to this day. It also acts as a more “real” memoir for Ray than his prior book, X-Ray, did (that book taking the form of a young man interviewing a reclusive ex-rock star who is in fact Ray himself). The central theme of Ray’s love/hate relationship with America and its role in his life, and indeed the entire book, is the 2004 shooting he suffered when living in New Orleans.
The core of the book is Ray’s search for himself; in his own irrepressible and self-deprecating way, he paints a picture of himself as a lonely and lost soul who never really had any roots once he left home at 19 with the Kinks. Having a house, but nowhere to ever call home, is the struggle that he never really manages to overcome, along with his never-ending quest for music. It’s quite interesting (and in some ways, personally relateable for me) how Ray literally lives his music, constantly writing lyrics and songs inspired by the everyday occurrences in his life. It’s hard not to laugh at his typically British humor, but equally hard not to feel pangs of sadness when he describes his aching love for his children who he seldom gets to see due to his nomadic musician lifestyle.

The city of New Orleans is the pivot of the book in that it involved Ray’s most recent quest for what he calls “The Riff,” or the everlasting source of music. He claims to have picked New Orleans at random because of the party atmosphere and how music permeates every part of life down there. Through the years he spent living there, he introduces us to the cast of characters who he’s lived with and loved there, and dramatically leads up to the night in 2004 when his life was changed forever. While walking home from dinner with his girlfriend, a mugger swiped his girlfriend’s purse after shoving Ray to the ground. Ray gave chase and was shot in the leg before the mugger made his escape. He then goes into intensely personal detail about the immediate aftermath and his long road to recovery in and out of hospitals, as well as the amazing care he received from friends who took care of him in New Orleans. What was absolutely shocking and revelatory to me was that, similar to the home invasion attack of George Harrison in 1999, Ray’s shooting was made out to be much less serious in the media than it actually was.  When George was attacked, the press made it sound like he was just stabbed superficially a few times when in fact he was butchered and came inches from dying. Likewise with Ray, while the media made it seem as though he simply suffered a flesh wound to the leg, in actuality the shot shattered his femur, requiring surgery and a metal rod inserted into his leg. Complications from his weakened heart and infection made his road to recovery rather long and he has a permanent limp as a reminder of that event. Even so, it did not dim his enthusiasm for New Orleans or America, and even though at the end of the book he leaves the city for the UK, it’s hard not to get the sense that he’ll always come back in his never-ending quest for “The Riff.”

There’s not too much for me to fault in this book.  The sections about his experiences in New Orleans are fascinating, and his telling of the Kinks’ story is as bold and vital as that in any Kinks biography. Not only does he corroborate many stories and events that were detailed in other books, but there’s a lot of new information that will be welcome to any Kinks fan. If I did have some complaints about the book, they would be that he rather abruptly ends the story around the time he went back to England from New Orleans once he’d recovered enough in 2004/2005. However, it’s clear he’s been back since there is a picture in the book from a festival appearance in the city in 2011. Since he ended the book saying he’s not sure he’d ever go back after his ordeal, it seems incongruous as he clearly did based on the photo. My other complaint is that he didn’t shed any new light or give his take on his fractured relationship with brother Dave. While I realize that the Davies brothers’ relationship wasn’t central to this book like it is in other Kinks biographies, I was still hoping Ray would offer some insight here.

Written in a dryly humorous, intensely emotional manner and peppered with lyrics both old, new, and unreleased, Americana is a strange and unique take on a memoir in a way only Ray Davies could do. Not only essential reading for any Kinks fan, this book would be worthwhile to anyone who is a fan of 1960s British rock. Even if you simply like to read about the lives of interesting people, you can’t go wrong with Americana. As in his own words, it’s all about Ray finding out who he really is and coming to terms with it, and through his songs he helps us find out the same about ourselves.

I'm a PhD chemist, New England born and raised, living and working in the Boston area. I'm also a musician and writer and a music addict since birth. I'm a huge fan of many bands, especially the Beatles, as well as my local sports teams (Red Sox, Celtics, Patriots, Bruins). I'm an avid runner and fitness enthusiast which helps me and my wife take care of our 4 wonderful kids who keep us very busy! In addition to my blog, I'm a published author of two books on the rock band Blur, with more book projects in the pipeline, provided I can find more hours in the day to work on them.