With literary festival season kicking off in earnest in March, there’s plenty of action on the poetry scene around Ireland this month, so let’s get to it – you’d be mad as a March hare to miss out!

The 10th anniversary Ennis Book Club Festival gets underway on 4 March, with some top poetry treats in store! The Festival aims to promote and celebrate reading and has attracted 30,000 visitors to Ennis, from Ireland and beyond, in its 10 year history. Previous featured writers have included both national and international names John Banville, Roddy Doyle, Anne Enright, Blake Morrison, Edna O’Brien, Joseph O’Connor and Martin Sixsmith. This year you can catch UK poet, Lemn Sissay, along with home-grown talent, Doireann Ni Ghriofa, Leanne Sullivan and Ailbhe Ni Ghearbhuig, as well as a host of big names, including journalist, Kate Adie and author, Marian Keyes. More information and tickets at Ennis Book Club Festival.

And just up the road in County Clare, the Doolin Writers’ Weekend is also stepping up on 4 March, with readings from Joseph O’Connor, Lia Mills and Danielle McLaughlin! Anne Enright once said, ‘There’s no VIP room in Irish literature,’ and Doolin has taken this to heart, with a relaxed vibe that is fast become a favourite fixture on the literary calendar. This year, you can catch poets Elaine Feeney, Billy Ramsell and Neil McCarthy, at the Mad Hatter’s Tea Party, the launch of Salmon Poetry‘s 35th Anniversary Anthology, check out the winners of the annual poetry competition and throw down a few rhymes at the open mic, on Saturday, then drop in to a publishing workshop with Banshee Lit on Sunday. Phew! You’ll need another weekend to recover! More info and tickets available from Doolin Writers’ Weekend.

In the Wake of the Rising: Stinging Fly Launch (9 March) 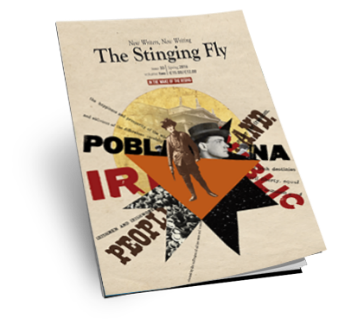 The Stinging Fly launches its special issue: In the Wake of the Rising, on Wednesday 9th March at 7pm, in the Irish Writers Centre. The 1916 themed issue, guest-edited by Sean O’Reilly, will be launched by Professor Michael Cronin of DCU. It includes new work from Kevin Barry, Patrick McCabe and Glenn Patterson, plus poetry from Colette Bryce, James Harpur, Iggy McGovern and Doireann Ní Ghríofa. Guests on the night will include Siobhan Campbell, Lauren Lawler, Patrick McCabe and Stephen Murray, and the celebrations will move on to The Liquor Rooms after, where Gavin Corbett will be manning the decks. More information at The Stinging Fly.

The work of Northern Irish poet, Stephanie Conn, has been a regular feature in emerging poet competitions in recent years and this month sees the launch of her debut collection, The Woman on the Other Side. Conn, a graduate of the MA programme at the Seamus Heaney Centre, and recipient of an Arts Council Career Enhancement Award, has already walked away with the Yeovil Poetry Prize, the Funeral Service NI Poetry Prize and the inaugural Seamus Heaney Award for New Writing. With such stellar beginnings, we’re going to be hearing a lot more from Stephanie, so this is one you don’t want to miss! The collection will be launched by Moyra Donaldson, at the Crescent Arts Centre in Belfast, on Friday 11 March from 8pm. More information at Doire Press.

March, you’re spoiling us on the ole literary festival front — no sooner does one end than another begins! The Mountains to Sea dlr Book Festival starts on 9 March in Dun Laoghaire, with some serious star power including Michael Parkinson, novelist John Boyne and Pulitzer Prize-winning poet, Paul Muldoon. The festival plays host to two major poetry awards: The Irish Times Poetry Now Award for best collection by an Irish poet and the Shine/Strong Award for a debut collection. All this and readings from Colette Bryce, AE Stallings, Ciaran Carson, Theo Dorgan, Thomas McCarthy and more! Info and tickets available from Mountains to Sea dlr Book Festival.

Fancy having one of your poems workshopped with a master of the form? Words Ireland, in association with Wicklow County Council Arts Office and Wicklow Library Services, are hosting a poetry masterclass in Bray with Ireland Professor of Poetry, Paula Meehan. Poets, who have work published in established journals and magazines, are invited to submit 2 poems and a short expression of interest to Maureen Kennelly at Poetry Ireland by Friday 18 March, 5pm. Successful applicants will be notified by Tuesday 22 March. More info at Poetry Ireland.

If you have a poetry event coming up in April or a regular event that you’d like to see featured here, send details to [email protected] by 25 March, for inclusion in next month’s Poetrybeat.