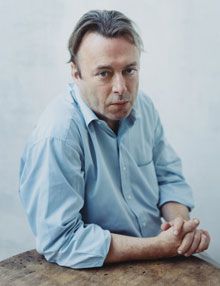 Christopher Hitchens was a writer, debater and all-round rational man. He wrote for many big magazines and wrote many books and through all of them you get the opinionated, no-nonsense, yet elegant style that brought him fame.

He died in December 2011 from cancer and the reason I’m writing about him now is because I just finished his last book, Mortality

. It blew my mind, which didn’t surprise me and it was such a fitting subject and style from a man who never minced his words and always talked about what bothered him in the world.

You can quite plainly see from reading this book that his impending death was bothering him, but he still wrote about it frankly and honestly and that’s why I love him. The book is not filled with sentimentality or airy-fairy notions about where he’s going or ‘how it could have been’. He was dying, and this is what was on his mind.

Yes he would have liked a cure, and he did try to find some sort of brand new, ahead of the curve, future cure, but alas, it wasn’t to be. Just incase you’re worried that this book is just about death, don’t be, it wasn’t the only thing on his mind, he still finds time for a few last words on religion and politics and life and the world. He was a big smoker and drinker and he was the first to point the finger at his own excess as the reason of his disease. He looked for no excuses.

Other books by Christopher Hitchens

include the bestseller God Is Not Great, The Missionary Position: Mother Teresa in Theory and Practice, The Trial of Henry Kissinger, Letters to a Young Contrarion, Why Orwell Matters, and Love, Poverty and War, these, alongside his autobiography, Hitch-22, A Memoir put Christopher Hitchens as one of my favourite all-time legends and I think that most people should read most of his work and watch his brilliant debates on Youtube or wherever you can find them. I’m excited for you to find out, if you don’t already know, what a Hitch-Slap is.