Tomorrow I must speak again. I will not open my mouth except to utter profundities.

Things I will no longer speak about:

I will continue this list when people inevitably try to enter into stupid discussions with me. My plan is to simply stare at them in silence until they say something interesting.

My mother left a box on the kitchen table with a giant bow on it for my birthday gift. Inside was the cat she got rid of last week.

There are no words for the things I have to live with.

My brother gave me a book of “real poetry,” this predictably contained a lot of toilet jokes and very little humour. He also gave me a card that looked like it had been written by someone who had the hand-eye coordination of a six-year-old. Xbox girl drew it. She was all sheepish and smiley, saying it was supposed to represent our inner-children. I know now that my inner child had a lot more dexterity than her’s.

Laura said we are going birthday dancing tonight and that she is “soooooooooo psyched” I can speak again. I told her I did not share her sentiments. She ignored my lack of enthusiasm and said that if I wasn’t dressed like a slut I wouldn’t be allowed into my own birthday party.

I took time today to compile a list of the things I will do this year.

Laura was horrified by my attempts to dress like a slut. Mostly because I looked like a slut. She said she meant high heels and big hair. It was because she’d invited loads of people to the pub and some of them were my elderly relatives. She deemed my hot pants wildly inappropriate, but I wore them anyway. If I cannot express my sexual being in front of my own grandmother, then I will never truly be free.

I shot-gunned three beers and stole a bottle of rum. Then I stuck my head out the pub window and shouted poetry at passers-by. It is important to enlighten the masses, even when intoxicated. Laura dragged me back to the dance floor and made me do stupid Eighties dance moves with my mother. Mother had drunk more rum than me and was trying to hug me at every opportunity. I told her there was no need to pretend we were anything more than the truth. She asked what that meant and I walked away. She is not ready to know.

I could not be less drunk than my middle-aged mother, so I drank a lot of vodka. My eyes blurred and I remember nothing more than dancing lights and endless dizziness. I asked Laura what madness I had created in my heightened state. She said I curled up in a ball in the middle of the dance floor and started crying about nobody liking my poems. I then had to be carried home by my brother, who put me in his giant coat, because he was embarrassed by my shorts.

The cat keeps climbing into boxes. Mother has irrevocably and psychologically damaged yet another member of this family.

Words came today. They carved spaces in my heart that I had not known were there. I was silent in their presence. Sometimes it seems they come from a place beyond myself.

My brother is moving out today. The entire downstairs is covered in boxes. It seems he owns about 50% of the things in the house and that mother is bestowing the rest of it upon him. She even gave him the fruit bowl. Which was very optimistic.

I’m glad that they are too dead inside, to consider the symbolism of a fruit bowl. All that fertility. As if the world needs another Xbox wielding college drop-out.

The house is strangely silent when it is just me and the cat.

I wrote about an emptying fruit bowl, in eight different poems. In each poem another piece of fruit leaves the womb. I showed them to Mother and she said sometimes the fruit just rots in the bowl, no matter how hard you try to throw it at the neighbours.

It is clear that moving out is necessary. She has started using terrible metaphors that make my soul cringe. 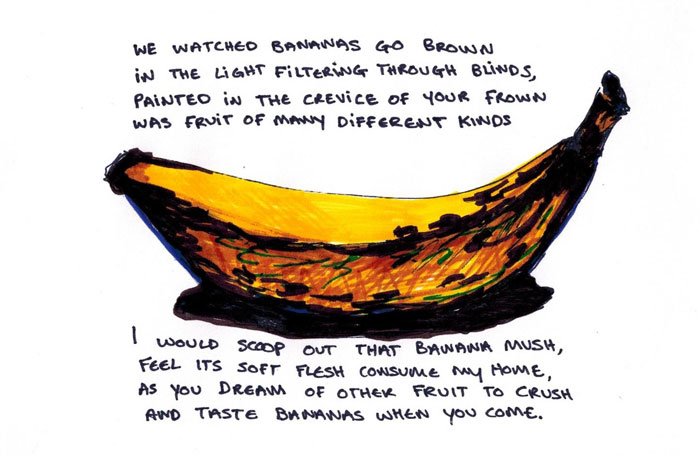 Give A Shit on World Toilet Day