Thomas Edison once said “I have not failed, I’ve just found 10,000 ways that won’t work” and I reckon that’s a pretty good way of looking at this particular ‘f’ word.

I personally don’t cope so well with failure. I cry, a lot. But tears I can handle, it’s the self-pity that spirals rapidly into self-doubt that can get dangerous. I had one such occasion this week. And it was a biggie. So much so that at four a.m. Wednesday morning, there was a requirement for rapid distraction. Taking out my iPhone I looked up some Ray Darcy podcasts and through the tears the following title stood out. “Sonia O’Sullivan – Fail Better” And I thought – ha! That’s bound to be a laugh…

So in went the earphones. As expected, it wasn’t a laugh; in fact it made me cry more for a few minutes as Sonia talked about her infamous race in the Atlanta Olympics. The race that the whole world deemed to be a done deal.  That had a gold medal with her name on. That she only had to show up for.

As the history books will attest, she showed up all right. She showed up. She ran, and she ran. And as she ran that same whole world watched in horror as practically every one else in the race started to run faster. Not only did she not get her gold medal, she didn’t finish the race. She probably could have finished, she told Ray, but to finish would have meant exiting through the tunnel where the world’s media waited with questions that she couldn’t yet answer. So she ran her final lap watching for an exit through which she could run her last strides and disappear.

Failure with a capital ‘F’.

And so when the Science Gallery asked her to partake in their exhibition on Failing Better, she was slightly taken aback. But then she looked beyond the title of the exhibition and learned about its purpose…

“The goal of FAIL BETTER is to open up a public conversation about failure, particularly the instructive role of failure, as it relates to very different areas of human endeavor. Rather than simply celebrating failure, which can come at great human, environmental, and economic cost, we want to open up a debate on the role of failure in stimulating creativity in science, engineering and design.”

Atlanta almost spelled the end for Sonia O’Sullivan. But in the piece that accompanies the Atlanta Olympic Accreditation that she donated to the exhibition, she says the following:

“This is my accreditation pass from the 1996 Olympics in Atlanta, where I failed to live up to all expectations based on my achievements up to that point, including being the reigning world champion over 5,000m. The following year I tried to erase the failure at the World Championships but once again came up short because I was trying too hard to overcome that failure and prove that I was still a great athlete. It was only after this disappointment of 1997 that I accepted the failure that occurred in Atlanta the year before and took the decision to walk away from everything in my past, whether good or bad. This was when I was able to shut the door and start all over again and realise that failure may be the end of one chapter in your life but it doesn’t mean that you will never be successful again.”

She did go on to win again and at the Sydney Olympics four years later she became the first Irish woman to bring home a silver medal for athletics. 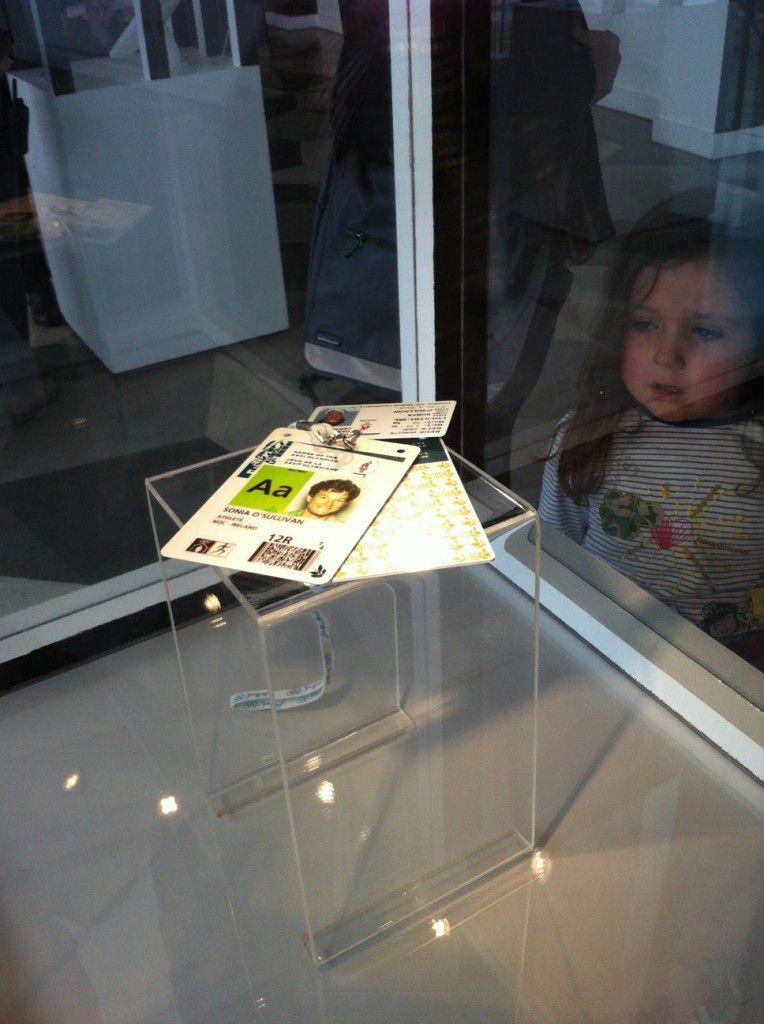 I attach a picture I took of Sonia’s accreditation when I visited the exhibition today. I didn’t notice at the time but you can see my four-year-old daughter’s face looking through the glass at it too. Because I did what I avoid doing as a rule. I brought both my little girls to Dublin with me and walked them across town to the Science Gallery on Pearse Street. I did this because one day they will fail too. If they don’t, it means I will have failed as their mother. Because not to fail, is not to have attempted, not to have risked, not to have pushed yourself. But when this failure inevitably does happen, I want them not to wake in a sea of self-pity at four a.m. I want them to know that failure just means picking yourself up and trying again.

“Ever tried. Ever failed. No matter.

And I urge anyone who has created something, who has tried something, who has dreamed of something – whether it worked out or not, to attend. The exhibition runs until 27th April. It’s free, and it’s full of the most amazingly inspirational stories from legends such as Flann O’Brien to Ranulph Fiennes.

I won’t say there weren’t more tears today, but I’m blaming the sight of Superman’s empty wheelchair. And the realization that really, I’ve little enough to be worrying about. I tried. I failed. I’ll try again. And sure if I fail better, won’t I be in fine company?

Because as Winston Churchill said “Success is not final, failure is not fatal: it is the courage to continue that counts.”

I’m adding a footnote to say that for the sake of mother’s worldwide I’m kinda glad those guys that designed the table that spun pregnant women with centrifugal force in order to ‘help them deliver’ failed. Like seriously folks, it’s hard enough…

Ep 5: That Night We Won with Niamh Kavanagh and Neil Delamere