It may seem unlikely now but it is perfectly possible that in a few decades’ time someone might ask: “Do you know JK Rowling?” And, after a blank stare, might be forced to add: “You know, the woman who wrote Harry Potter”.

The American author Edgar Rice Burroughs was, in the first half of the twentieth century, in a remarkably similar position to Rowling. An internationally successful, bestselling author; stories read and loved by children and adults alike; a regular presence in the media; stories made into films, stage plays and radio shows; a huge fortune made from tie-ins and merchandise.

Today, however, he is very much Edgar Rice Burroughs…you know, the guy who wrote Tarzan.

So who was he, and why has his name slipped out of recognition? In 1919, in letter to his editor, the Burroughs wondered whether he was “going to be known as Edgar Rice Burroughs the author or Edgar Rice Burroughs, author of Tarzan of the Apes”. A century later, the latter is very much the case. Tarzan is the ape-man who straddles two worlds: animal/human, European/African, black/white, savage/civilized (at least as people saw it at the time). Tarzan captured the imagination of contemporary readers, when Tarzan of the Apes was first published in 1912, and he has continued to do so ever since. Our conceptions of race and culture may have changed, but the continued reimagining of the Tarzan tale attests to our fundamental fascination with nature versus nurture and with what it means to be human. 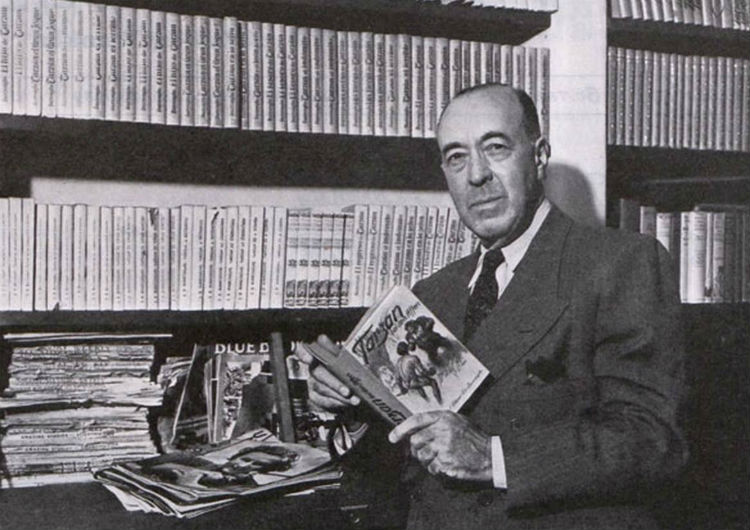 But Burroughs was much more than the creator of Tarzan. He wrote numerous adventure novels, various Tarzan-like jungle tales, detective fiction, westerns, and lots of science fiction.  His first novel was A Princess of Mars, beginning one of the first ever science fiction series set on Mars. It inspired a generation of science fiction writers and film makers and you can see the influence of Burroughs in everything from Star Wars to Superman to Flash Gordon to Avatar.

Disney spent a phenomenal amount of money on John Carter, the 2012 adaptation of A Princess of Mars, but American box-office takings were very disappointing (although the film did perform much better internationally). A number of reasons were given to account for the film’s underperformance, from the director’s lack of live-action experience, to marketing failures, to bad casting. Ultimately, however, the film suffered from a lack of originality; everything in it had been done before. To the average cinema-goer the film seems commonplace and derivative but, ironically, much of this is due to Burroughs’ influence on so many other works. Tarzan has tended to fare a lot better on the big screen, from the early Johnny Weissmuller films, right up to the Warner Bros 2016 reboot, The Legend of Tarzan.

Burroughs was a prolific author and his output was quite variable in terms of quality. Nobody is advocating reading the two dozen sequels to Tarzan but Tarzan of the Apes is a classic of American popular literature while A Princess of Mars is an essential part of early science fiction. If you want to get a sense of what Burroughs was all about, including his fascination with science, the Caspak novels are a great place to start. This trilogy of stories is set in a lost world whose inhabitants are governed by a bizarre but fascinating version of evolution. It’s got dinosaurs, naval battles, adventure, a love story…and evolutionary theory. What more could you ask for in a story?

Conor Reid (@cedreid) is a writer and podcaster from Dublin. His literature and culture podcast, Words To That Effect, is on the Headstuff Podcast Network.

The Science and Fiction of Edgar Rice Burroughs has just been published with Gylphi Press, and is available on Amazon here

Words To That Effect 49 posts 0 comments

Stories of the Fiction That Shapes Popular Culture. Words To That Effect was launched in 2017 and is written, produced, and hosted by Conor Reid. From zombies to dinosaurs, Victorian detectives to contemporary crime fiction, Irish science fiction to American history, alternative pasts to speculative futures, how does fiction influence, reflect, and inspire our popular culture?