Fleur Adcock was born in New Zealand in 1934 and moved to Britain in 1963 where she lives today. Although Adcock began writing poems in New Zealand, a lot of her poetry has an ironic mood camouflaging fear or anxiety – providing her work with an English tone. Her most successful poems are ones about apparently marginal or peripheral locations. The poet Ruth Padel says, ‘she is a poet of no solutions: of giving you what’s there then standing back and seeing what you make of it.’

This neat little ‘Video’ clip of a poem offers a snapshot into a family’s life like a short film. Each line of the first stanza is like a new angle taken by a camera. The shots seem straightforward enough, but then notice the way the third line flows into the fourth. This occurrence in verse is called an enjambement, which means the continuation of a sentence beyond the end of a line, coming from the French enjamber, meaning to stride, or as Stephen Fry titillatingly puts it, ‘getting one’s leg over.’ The mind naturally pauses, if only briefly, before switching to the next line, so when ‘and Ceri’ pops up it appears tacked on, suggesting that Ceri is becoming part of the furniture and not the focus. 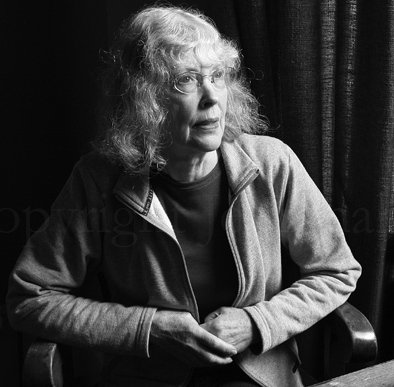 Adding to that tone, the enjambment abruptly comes to a full stop – literally! This pause in the middle of the line has a name too – it’s called a caesura, (coming from the Latin meaning, cut or hew). This allows the four words of dialogue spoken by dad, ”Move over a bit,” to make a stronger impact; even if only subconsciously – both these technical devices create a subtle tension which are at the centre of the piece.

Another interesting Latinate word to throw into the mix here is stanza.  In poetry, it means a group of lines set off from other lines in a poem using spacing. This poem has two stanzas. In Italian, stanza means room, which suggests an image of the poem as a house with many rooms. We are shown two rooms: the first is the parent’s bedroom and the second is probably the sitting room – or what is more accurately called these days the TV room. Mum is ‘twice as busy’ putting all her energy into the new baby – reminding us that Ceri is not getting the attention she would like.

After ‘busy’ comes another slight caesura where the camera cuts to Ceri playing the ‘video again and again.’  Ceri, via video, has the power to whisk her little sister back to where she came from. ‘Again and again’ gives a comedic picture of a baby coming in and out of mum, but it also makes Ceri’s pain that much more palpable as we culminate to the final gut-punchline,

‘in reverse, she made her go back in.’

The word reverse is worth mentioning, hinting towards its sibling, verse, reminding us we are reading a bit of verse. The Latin origin actually means a turn of the plough. (Farmers may be fascinated to discover that poetry has its roots embedded in agriculture! Incidentally, our greatest living poet, Seamus Heaney grew up on a farm.) After making a furrow along a field the plough turns round, to make another similar furrow, just as lines of verse follow a set metrical pattern. Ceri is creating her own verse, or re-verse by playing Laura coming out and going back ‘in again and again’. Notice too, that the lines ploughed out in this poem all have neat little near rhymes or close rhymes – which help smooth the edges of this fraught piece of sibling rivalry – like a well edited film noir.

ADAM WYETH was born in Sussex in 1978, and has lived in Ireland since 2000. Wyeth's critically acclaimed collection, Silent Music (2011)  Highly Commended by the Forward Poetry Prize  has been hailed as 'a debut of astonishing assurance.' Ailbhe Darcy, describes Wyeth as a 'poet of ideas exquisitely wrought and swarming, demanding a reader awake to complexity on a subtle scale... The Irish Times say, 'Silent Music is a clever volume that playfully questions taken-for-granted certainties... a fresh and imaginative voice is evident.' Wyeth's second book The Hidden World of Poetry: Unravelling Celtic Mythology in Contemporary Irish Poetry was published by Salmon in 2013. The book contains 16 poems from some of Ireland's leading contemporary poets followed by sharp essays and close readings that unpack each poem and explore its Celtic mythological references. Paula Meehan says 'This book connects us back to a Celtic dreamtime through mythology, which is, no more, no less than the poetry of the ancestors. It reaffirms the vestigial and, paradoxically, central role of ancestral thought in contemporary Irish poetry.' Wyeth's debut play Hang Up, produced by Broken Crow, has been staged at many festivals, including the Electric Picnic, the Galway Theatre festival. Hang Up has been adapted for the screen, directed by Enrique Carnicero and premiered at Cork International Film festival 2014. In 2013 Wyeth was commissioned to write The Poetry Sessions, a full-length play covering all the poets on the Leaving cert syllabus, which has just been on its nationwide tour; co-written with Paula McGlinchey. His third play, Lifedeath, produced by Broken Crow was showcased at the Triskel Arts Centre mini festival of new work in December 2013 and was named by the Irish Examiner as the play of the festival. It was also performed as part of University College Cork's Theatre Festival and Engage Arts festival Bandon, 2014.

Review | SOAK delivers a magical, brilliant debut on ‘Before We Forgot How To Dream’

On the Limitations of Mr. Christian Grey