Hollie McNish is an unstoppable poetic force. Her videos have gone viral and her words have touched people in every corner of the world. Hailing from the UK, she has performed on stages just about everywhere. Her poetry has been noticed by the likes of Marie Claire who described her as a “boundary breaker” and the poet Benjamin Zephaniah who said “I can’t take my ears off her”. Indeed, it is almost impossible not to listen to the rhythm of her words. She’s got more accolades to her name, than I have room to share them. She will be in Dublin for Lingo Festival and everyone should go and see her perform. Then they should buy her album Versus which was recorded at Abbey Road Studio. Then, buy her second collection of poems Cherry Pie and her new book on parenthood ‘Nobody Told Me’ when it is released in February 2016. Here she chats about Lingo, Words and everything in between.

So, first things first, why Lingo?

The main draw for me with Lingo is that it is all about speaking words aloud. I love hearing poetry in all it’s forms – from rap to regular readings! I love the fact that the festival really embraces the spoken side of poetry and that there is a massively diverse amount of performers packed into this weekend. A lot of events focus on the Poetry Slam or rap or spoken word, but not many places put them all together. I find it amazing that a group of people actually bust their arses, often for free, to put events like this on – so heads up to them all.

How did you first begin your poetry journey? Were you scribbling on paper first? Had you seen other spoken word work? Your voice and tone seem so fresh and genuine, is this something that came naturally to you or needed a lot of work?

Yeah – I was writing poems way before I’d ever heard of spoken word. I wasn’t the sort of person brought up in cities around arts centres and theatres and poetry recitals. I was in a village printing off Courtney Love and Tracy Chapman lyrics and scribbling down all my thoughts and dreams in poems. And then hiding those poems from everyone. I only started reading any poems out when I was about 25 and had no intention of ever doing this as a career. I didn’t think it would be possible and really, it just didn’t cross my mind. It’s just been an obsessive hobby to write. I always wanted to do something a bit practical, helpful, as a job. But I’ve always been writing, since I was about 7,  it all just splurted out in rhyme! [iframe id=”https://www.youtube.com/embed/rTMU8khwQQ0" align=”center”]

Were you always courageous about speaking up, even if not always in a poetic sense?

There’s obviously a huge line-up for Lingo of Spoken Word Art. Do you have any favourites that you’re looking forward to see or do you think you’ll just throw yourself into it? Will you be around to see what’s going on or just flying in for the gig?

No, I’ve made absolutely sure I’m there to watch some – most gigs are an in-and-out thing, which is such a shame. But no, Lingo, I’m there. I’m going to see Tongue Fu, which I’m really excited about. Then excited to see Elaine Feeney, who’s on before me – and I’m really excited to see the State hip-hop night with BackShed and Inja – I get to chill out to that after my own gig nerves are over!

Your poems bounce and flow and explore many different themes from the political to the personal, can you talk us through how they come about? Do you ever find yourself trying to write to topical themes or do those poems come from a sense of frustration?

I never sit down to write. I never think ‘I want to write about this news article’. I’d find that really boring, I think. No, I just get an idea in my head and then sit and write it. I’ve hundreds of scribbles, of half done poems, or three lines or whatever, sat on my laptop. I’ll probably never finish most. But no, I just get an idea or a line and if I can, then I’ll sit and write it out. Like this morning I cycled to work, got to work and wrote a quick poem about the bike ride! I write a lot about politics, migration in particular, because that was what I did a Masters in  – development and economics, with a focus on forced migration. So I read about that topic a lot. And then I write poems about what I’ve read! [i[iframe id=”https://www.youtube.com/embed/qCO-YmLT8t4" align=”center”]p>

You seem to be all about spreading poetry and bringing new voices to the stage – can you talk a little bit about this?

I just think there are so many brilliant poets out there. I get asked to do a lot of gigs, and I know a lot of that is because I luckily had two poems go viral on YouTube. And because of that I’ve got more followers on social media and it’s a helpful spiral. Then there’s people just as good who didn’t have a poem that happened to be shared on Upworthy or Reddit, or wherever. So I want people to hear them too. Nothing’s ever only because you’re hard working –  I work hard but I know there’s a lot of luck in it too. So I try to book a support act whenever I do a gig/tour and have a list of poets I recommend to people all the time. Because I think they’re brilliant, that’s the only reason! I’ve had a lot of help from other poets and event organisors, It’s a good commuity to be in.

I know it’s an old tired question, but would you (as an advocate for it) please go a little into why poetry and spoken word are so powerful and meaningful and we need both in our community?

[pul[pullquote]ring other people’s poetry has totally bashed down any ideas I had about judging people [/pu[/pullquote]sed to think poetry was some arty farty wank. Excuse the description! When I first started gigging I felt like it was totally impractical and unhelpful and that I needed to go back into town planning or youth work or something more concrete. But more and more, especially through the schools workshops and from the feedback I get from people, I realise how practical it is – like any art really – practical in terms of how cathartic it can be to write, practical as an outlet for sadness, frustration, anger, heartache – all the things that may otherwise eat you up and swallow you whole. And then in terms of reading or hearing poetry, it’s an amazing way to be uplifted, to see other people’s points of view, or views of life. It opens my eyes daily to pieces of the world I couldn’t possibly experience in my short life and to the minds of people I may otherwise have looked at and boxed up as thinking and feeling in a certain way. Hearing other people’s poetry has totally bashed down any ideas I had about judging people – made me realise no-one has any idea what anyone else is thinking, feeling or going through. I think that’s a great thing to be part of.

I think a lot of young poets look up to you and one of the really remarkable things is your ease and comfort on stage? Can you give young poets who get nervous any super-secret tips?

[pul[pullquote]For God’s Sake, what’ll happen if it goes wrong – no-one’s gonna die from a poem they don’t like. If I mess up at work, I could end up sticking a speculum up someone’s arse’ [/pu[/pullquote] Ask anyone who does a gig with me and that is definitely not true! I am a nervous wreck, have missed my stage call quite a few times because of vomiting in the toilet and I never go on stage now without my book because the nerves of reciting things by heart and worrying about forgetting them were just too much for me to cope with – it was making me hate doing gigs. So…I’d say don’t worry about the nerves. They are normal. And don’t feel like you have to do things you don’t want. I know it’s good to push yourself if you want to, and a lot of people see reading from a book, for example, as lazy or not ‘spoken word’ enough, but fuck it. It’s just a fucking poetry reading! I’ve never been into drama or acting or being on the stage and I don’t get a rush from it like some of my mates do. But I want to do it. I still love it. I just love doing it quietly and from a book! 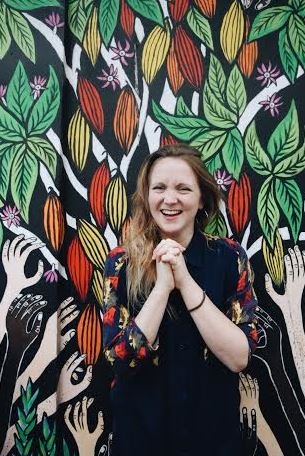 It took me a long time to get up on a stage, but I think the best advice came from my mum. ‘For God’s Sake, what’ll happen if it goes wrong – no-one’s gonna die from a poem they don’t like. If I mess up at work, I could end up sticking a speculum up someone’s arse’. (She’s a nurse). I thought. Yeah true. What’s the worst that could happen.

Where do you see poetry going in the next few years, are you going to help drive it in that direction and what angle do you want to see your work take in the bigger picture?

Yeah – it seems to be sprouting from all angles. I just like the fact it seems to be reaching more people and also, that we are getting more and more opportunities to hear poetry read aloud and read in communal spaces. I think it’s really great. That said, I hate the whole spoken vs written shite. I think poetry written just for the page is a craft  – as is poetry written just to be read. For me they are very different crafts, but with a lot of cross overs. I’m just going to carry on doing gigs as long as people want me to. If they don’t, I’ll stop. And keep using YouTube and stuff so that people who can’t come to watch it live, can still get a taste of it if they want.

Hollie can be followed almost anywhere! Check out her website, her Facebook, her Twitter and her YouTube. And when you’re finished with all that book tickets to some of her upcoming shows for Lingo, UNICEF, and the Northern Ireland Human Rights Festival.