As the author of the only authorized biography of The Beatles published in 1968 which, while dated, is still an essential read (especially the updated editions), Hunter Davies has had privileged access to the band. He interviewed them extensively for that book, traveled with them, ate and drank with them, and sat in on writing and recording sessions for the landmark “Sergeant Pepper’s Lonely Hearts Club Band” album.

After the demise of the band, he still kept in touch with all of them, and it is this incredible and unique perspective he brings to the table as the editor of The John Lennon Letters.

Amongst all of the Beatles, John was the one who, while perhaps unfairly labeled as the only “artistic Beatle,” certainly was uniquely talented and creative as a writer and artist and the one member of the band whose skills in those areas were on ample display to the public. He authored 1964’s In His Own Write and 1965’s A Spaniard in the Works, created lithographs for an exhibition in 1970, and is very well known for his sometimes charming, oftentimes bizarre doodles and scribbles. He was also a very keen writer of letters and postcards, firing off notes and missives to everyone from his family and friends to magazines, newspapers, and his fans.

The John Lennon Letters is a compendium of his personal writings as curated by Hunter Davies. The very interesting introduction to the book details how the various letters, postcards, notes, lists, and other scribblings of John’s were discovered. In many cases, Davies was able to personally photograph or scan the originals, and in other cases he was only able to obtain photographs of copies from the owners. Many letters remain in the possession of their original recipients, while the majority are in the hands of various collectors. The layout of the book consists of each chapter chronicling a certain period of John’s life, from his childhood and school-aged years through the early Beatles and Hamburg years and the entire Beatles decade. After that, it is broken down by each stage of John’s post-Beatles life, first in England and then in the USA up until his tragic death in 1980. A picture of each letter is accompanied by Davies’ transcription typed out adjacent to it, which is a good thing given how John’s handwriting could be quite messy at times to the point of certain words being indecipherable. Where possible, Davies has contacted the original recipient of each letter and includes their memories of the letter, and in all cases he gives a brief synopsis of each one. However, as he stated in the introduction, his intention is to stay out of the way and let John’s writing tell the story of his life. 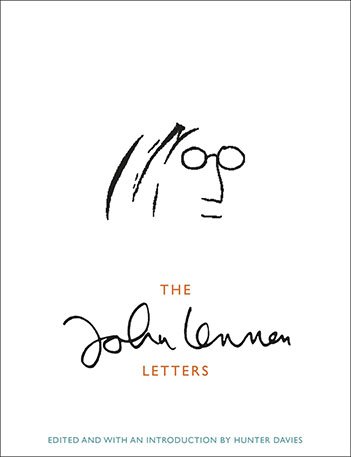 Starting with childhood thank you notes to relatives and moving on to the letters he wrote to Cynthia, Stuart, George Harrison’s mother, and his Aunt Mimi, a portrait emerges of a more tender and caring John Lennon in the pre-fame years than what is commonly believed. As can be seen throughout the book, John constantly drew little cartoons and doodles on his letters, done in his inimitable style and they’re almost always funny and/or charming. Progressing through his life as told through his letters, it’s almost magical to get a sense of the regular person John always was behind his fame and stature as one of the Beatles. Many of the letters are mundane and relate to matters concerning family and friends. He almost always shows kindness to fans who wrote to him and he offers help and support to his aunts, uncles, half-sisters, and cousins when asked.

Surprisingly, he also had a warm correspondence with a few figures in his life that are unexpected, including his estranged father. Occasionally, the intended target of his letters is on the wrong end of John’s wit, and some of these make for painful reading (mainly the letters to Paul and Linda in the immediate aftermath of the Beatles’ split) while some are hilarious and laugh-out-loud funny (his takedown of “Turd Runtgreen,” aka Todd Rundgren).

The best letters are the ones where John is his true self, and these are usually written to his family back in the UK. In particular, toward the end of his life (1976-80) he grew more wistful and nostalgic for his childhood and the times he had spent with his aunts, uncles, and cousins. He expresses sadness at the passing of his aunts, confusion why some of his cousins are angry with him, frustration and love for Mimi, fondness for the times spent in Liverpool and Scotland as a youth, and more than a bit of bitterness toward his status as “money” to some of his family members. I found these letters to be very touching and enlightening and felt that they offer real insight into John’s soul. Perhaps it sounds corny but after reading this book, and these letters in particular, I felt like I had a much better understanding of who John Lennon was as a person even beyond what has already been written about him.

Since it’s often difficult to separate the man from the musician, the letters contained in the book show that beyond his life as a world-famous musician, activist, and celebrity, John was also a normal man filled with the same doubts, fears, passions, and loves as the rest of us. He regretted how neglectful he’d been as a father to Julian, adored young son Sean, had his ups and downs with Yoko, and still maintained great affection and love for Paul, George, and Ringo throughout the 1970s. He was a keen follower of pop culture both back in the UK and in his new home in the US, loved TV, and read newspapers, magazines, and books voraciously. He had a great sense of humor and his wordplay and his command of language were completely unique to him. And shockingly, given how the conventional wisdom has been that he had a lousy memory when it came to remembering his past, he was a keen Beatles historian, firing off multiple letters over the years answering questions about Beatles songs and records, events, and correcting mistakes in magazines and newspapers. There is always something new or interesting to learn about John as you read through the letters, and it’s one of the rare books where, in between readings, I could not wait to pick it up again because it was just so enjoyable.

I didn’t think it was possible for me to admire and love John Lennon the person more than I already do (strictly as a fan, of course) but this book has proven me wrong. I can say without hesitation that is now one of my all-time favourite books, Beatles-related or otherwise. Hunter Davies has done a remarkable and nearly flawless job of curating John’s letters, while also staying out of the way and allowing the letters do the talking. This book will not only give you a deeper and better understanding of John Lennon the man, but will touch you, make you laugh, make you cry, and make you think; he did that for the world with his music, and now he does it with his words. While he was tragically taken from us far too soon, his songs and his letters will go on, and for that and for this book, I am eternally grateful.

I'm a PhD chemist, New England born and raised, living and working in the Boston area. I'm also a musician and writer and a music addict since birth. I'm a huge fan of many bands, especially the Beatles, as well as my local sports teams (Red Sox, Celtics, Patriots, Bruins). I'm an avid runner and fitness enthusiast which helps me and my wife take care of our 4 wonderful kids who keep us very busy! In addition to my blog, I'm a published author of two books on the rock band Blur, with more book projects in the pipeline, provided I can find more hours in the day to work on them.

What to Drink to be Healthy in the 1940s