Behind the Scene |3| Lingo Spoken Word Festival (Part one)

The arts need support; that’s fundamental. We need to pay artists what they deserve and we need to give more of these kind of platforms. Everybody should come and see Lingo – it’s gonna be brilliant!” 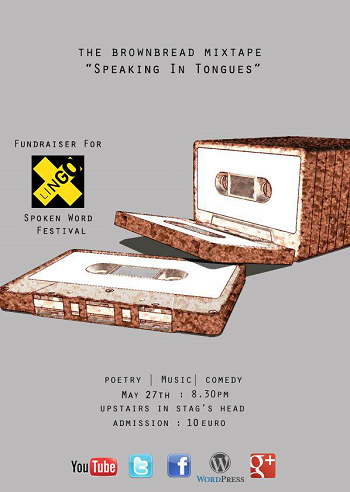 Last year saw Lingo take pride of place as the icing on the cake of Dublin’s rousing spoken word movement. The first festival of its kind in Ireland, it was set up in recognition of the calibre of talent on offer. Here, Kalle Ryan, one of the festival’s six founding directors, gives a glimpse of what the road to Lingo 2015 has in store.

Though it began in only 2014, Ryan says Lingo had been “oiling and cooking for a while”. With nights like The Brown Bread Mixtape, Milk and Cookies and The Glór Sessions inaugurating new talent and building a fan base for regulars, Ryan and his five co-founders felt that a tipping point had been reached. “There was a movement happening in Ireland that needed a central way of bringing all that stuff together and showcasing all the amazing stuff that was happening and also professionalising it.” [pullquote] “The indie, DIY ethic is the only way forward as an artist in Ireland.” [/pullquote]

The festival is a labour of love for Ryan and his co-directors, Stephen James Smith, Phil Lynch and Colm Keegan, as well as Artistic Director Erin Fornoff and Festival Manager Linda Devlin. “It was just something we felt should and would and could happen… We thought, ‘Let’s just do it’… We believe that spoken word in Ireland is as good as or better than anywhere else.”

Nevertheless, Ryan is realistic about just what it takes to bring a project that supports the professionalisation of spoken word artists to fruition. There is a worry that people “might think there’s money floating around: there isn’t. Funding for the Arts is being cut left, right and centre”. Although performers and tech professionals at Lingo are paid, everyone on the committee works for free. Getting a festival off the ground is “hard, hard work… The indie, DIY ethic is the only way forward as an artist in Ireland.”

Submissions for the festival closed earlier this month and were accepted in three brackets: Go Wild, where any idea to do with spoken word could be put forward; Individual performance; and the New Work Fund, through which an artist will be commissioned to produce a new work to premiere at Lingo. The majority of performers are deliberately chosen through this open submission process; though submissions and acts are curated, Ryan emphasises the desire for Lingo to carve a channel for new performers and says there was no desire to create a hierarchy of “the arbiters of cool… We’re thankful for the support that we’ve got and we need to keep getting more.” For Lingo to grow, year on year, new artists will always be sought and the aim is to consistently encourage their involvement. [pullquote] “It’s not just elbow patches and reading books, you know?” [/pullquote]

2014 saw almost 1,000 people attending the shows and Ryan hopes to build on that even more this year. New twists in show formats and settings can be expected, but the team is keen to “retain what made last year great and not lose the run of ourselves”. Making art open, inclusive and accessible is crucial to the ethos behind Lingo, and great value for their money is a big part of that aim. While Ryan wants to appeal to an already established audience, the goal is to mark it on the cultural calendar of people who may not be familiar with spoken word. “People coming for music, coming for comedy, and hearing spoken word and going, ‘jeez, that’s really good!’ That’s what we want… It’s not just elbow patches and reading books, you know?”[iframe id=”https://www.youtube.com/embed/3pHxvhDqllM” align=”center”]

Funding from Dublin City Council and Fáilte Ireland is greatly appreciated by the Lingo team, they are still working tirelessly to source sponsorship through other avenues. This Wednesday, May 27th, The Brown Bread Mixtape will hold a Lingo fundraiser in The Stag’s Head on Dame Lane, all proceeds of which will go into the pot for the New Work Fund. This means that anyone who attends the event will be “literally funding the world premiere of new work, so you’ll be giving directly to art”. Performers on the night will include John Cummins, Colm Keegan, Erin Fornoff, Sarah Maria Griffin, Phil Lynch and Mongoose; a “legendary raffle” is also promised.

With venues and lineup for Lingo still to be announced, early bird tickets will go on sale later this year and the festival is due to take place in Dublin from October 16th-18th. Volunteers keep the Lingo wheels in motion and Ryan invites anyone with a particular skill and who would like to offer their time to contact the team via [email protected]. A snapshot of the 2014 action can be found here and regular updates will appear on the Lingo Facebook page.

Lynn Harding is originally from Cork, but has had Dublin written in her heart since 2013. She likes structure but is terrible at planning, with the result that she stuck around university long enough to earn two Master's degrees (in English and Digital Humanities) before deciding upon a career. Her first forays into writing were dubious 'reworkings' of various Enid Blyton stories when she was in Senior Infants. Though she wrote exclusively fiction until her teens, she is now also a poet, like her dad, George. Her first loves are music and children's literature. When not writing, she spends her free time reviewing books, baking, and lusting after interior design blogs. She works as an editor and would be chuffed if you said hello via her blog Dublin Is My Canada or tweet her @LynnHarding_1

Pint of Science: Dinosaurs, Black Holes and Lisdoonvarna in Space

Behind the Scene |2| Flying South

Behind the Scene |1| Slam Sunday