Don’t be put off by swashbuckling pirate adventures on the high seas. Patrick O’Brian’s stories are marvellous character studies and breathtakingly exciting tales. Here’s why you should read him.

Patrick O’Brian is most famous for his Master and Commander novels, 20 fabulous books chronicling the adventures and misadventures of Captain Jack Aubrey of his Majesty’s Royal Navy, and his unlikely best friend, Dr Stephen Maturin, during the Napoleonic Wars. If everything about that sentence made you think – yawn! – think again. These are some of the most intriguing, interesting and genuine characters ever put on page.

The hero, if we can call him that, is Captain Jack Aubrey. Aubrey is a commanding figure of a man, inspiring awe and confidence in his men and colleagues. He is intelligent about matters of the sea, the navy and warfare. But he is no one dimensional leader, strong and flawless. No, our Captain Jack is an absolute booby on solid ground. He mangles languages, cannot tell a joke without losing the punchline, and is constantly being swindled and cheated by conmen. 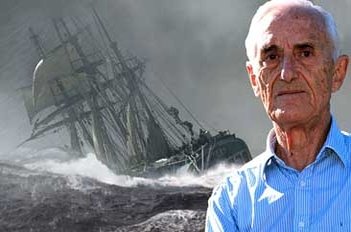 Which is why he needs his best friend, the good Dr Stephen Maturin. Maturin couldn’t be more different from Jack. He is an accomplished polyglot, a man of prodigious intellect, a man who can dissect a cadaver before breakfast. Nothing perturbs him, except perhaps the sea – an unwise choice perhaps for his home. He will saw off man’s limb, treat syphilis, keep a pet sloth, and learn a new language with ease. But he obstinately cannot be taught anything about the sea, the ships in which he sails or the science of navigation. And he is a man who cannot get on board a ship without first falling down its side. Yes, Patrick O’Brian is not afraid to pepper his prose with slapstick.

Most new readers probably come to the Aubrey-Maturin novels through the movie (starring Russell Crowe and Paul Bettany) or because they’re after a sea adventure. But fans stay because of the characters. Aubrey and Maturin are flawed, lovable, living characters. They argue, they get grumpy, they ignore one another, they put all their quibbles aside to get the job done. And then they take up their cello and violin and play a duet together with a bottle of claret.

It’s not just the main characters who are so carefully drawn. Over the course of the series there are many characters who recur, and following their journeys – successes, failures, celebrations, adventures, mishaps, deaths – is as pleasurable as following the main characters. A minor character who intrigued you in one book will turn up two books later, the captain of his own ship. And then he’ll be brutally killed off in the next book. [pullquote] This is not Game of Thrones, but it does have more than its fair share of sudden and gruesome deaths. That’s life at sea, I suppose. [/pullquote] A diplomat, for example, goes for a swim in the Red Sea and is promptly eaten by a shark. Another fills his pockets with all the gold he has and, missing his step onto his boat, plunges directly to the bottom of the ocean with all his treasures. The good doctor looks after a small girl in India, and discovers her lifeless body days later, the trinkets he had given her torn from her tiny battered body.

Amongst these supporting characters are even some – dare I say it? – women! Yes, actual women! It’s not all dudely bromance – there’s also time for regular romance, as well as the occasional ill-advised dalliance. Imagine Jack’s surprise (that’s a pun, by the way) when he comes face-to-face with his son, like him in every way, except for his black skin. 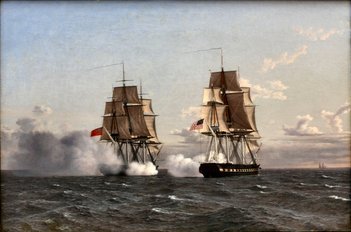 Yes, O’Brian is a master story-teller. But he doesn’t always get things right. There’s a scene in The Nutmeg of Consolation where Jack and Stephen decide to walk from Port Jackson in Sydney up north to meet their ship. Along the way, Maturin is attacked by a platypus in broad daylight. There’s a lot of things wrong with this scene. Firstly, it’s impossible to walk the route they do because of, well, Sydney Harbour. Secondly, platypuses tend to be nocturnal, shy creatures. No doubt, despite O’Brian’s excellent research, there are many such errors throughout the books, but hey – we’re not here for a geography lesson. We’re here for adventure!

O’Brian’s errors are forgivable because they are rare in this extraordinary body of work. He has taken his characters – and his readers – to so many parts of the globe that you can’t expect him to get everything factually correct. I’ve let him take me all over the world because I have such trust in him and his characters.

If you’re still put off by the nautical adventure thing, it is entirely possible to enjoy these books without ever understanding a thing about sails, futtocks, cannons, or the weather gauge. A friend of mine who absolutely loves the books, and who has read the whole series, admitted that she skims over the battle scenes! “I like the story and the people,” she says. “I don’t really care about the war.”

Writing in the Guardian, Lucy Eyre calls Patrick O’Brian: “Jane Austen at sea”. And if that also turns you off, let me simply say this:

There are very few writers who write so well with so much intelligence and humour while also telling a cracking great story as Patrick O’Brian. Trust me. Next time you want to read a good book, pick up Master and Commander. I assure you, you won’t stop until you hit Blue at the Mizzen, twenty books later.

Lenny Abrahamson – You’re Letting Me Down