(with apologies to Clement Clarke Moore)

It was the solar cycle before Christmas, and all through the station,
There was panic, and weeping, and childish consternation.
One boy stood aghast, with tears on his face,
For how could St Nick come to visit in space?

Yet finally the children were tucked in their beds,
With visions of meteors dancing in their heads.
The crew and captain of the first city in the sky,
Had settled for Sleep Period, some welcome shuteye,
When all of a sudden the sensors gave off such alarm,
That I dove from my bunk to see there was no harm.

I threw on the monitors and powered up the cams,
(Careful, of course, not to wake the wee lambs,)
The moon and the stars, and the Earth far below,
With its Northern Hemisphere dusted with snow. 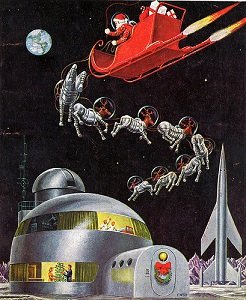 Then what to my wondering eyes should appear,
But a fleet of tiny spacecraft, shaped just like reindeer.
They towed a red sphere, impossibly quick,
And I could see on the side the registration “5T N1CK”.
More rapid than meteors, on an intercept it came,
And over the comms I heard him call them by name.

“Now! Quasar, now! Pulsar, now! Nova and Neutron,
On! Comet, on! Asteroid, on! Pluto and Charon,
To the side of the station, that great silver wheel!
Now deploy the docking clamp, and breach the vacuum seal!”

And quick as a flash, through our defences they came,
Lasers and forcefields brushed aside just the same.
And then, in a twinkling, on the hull of the station
I heard robot feet, and I was filled with elation.
For I knew our alien visitors meant us no harm,
(Though this may have been down to some mental charm.)

As I donned my security armour and was turning around,
Then down the corridor St Nick came with a bound.
He wore a shiny red spacesuit, with coal black boots,
Though his helmet was stained with old chimney soot,

A crate of toys he carried with barely a care,
Though it must have weighed a ton, he hefted it like air.
The stump of a pipe he held in his teeth,
Though he didn’t light it, to my eternal relief.

He was chubby enough, with his suit cut to fit,
And it lifted my heart to see him in it.
A wink of his eye, and a twist of the switch,
Left me held in place by some power eldritch.

He held radio silence, as he distributed gifts,
Then, stockings all filled, he moved to the hoverlifts.
And laying a finger alongside his nose,
By the power of science up the shaft he rose.
He sprung back into his ship, to his team gave a signal,
Then his face on our monitors, with his eyes a-twinkle.

Then he said ere his ship leapt to the speed of light,
“Merry Christmas to all, and to all a good night!” 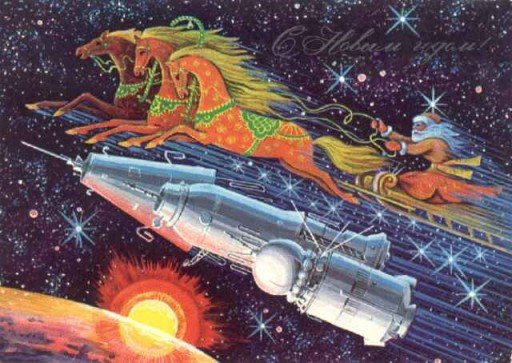