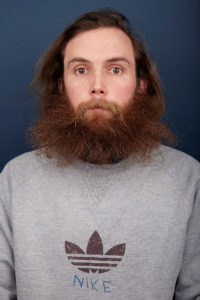 Rob appeared on Comedy Central’s Stand-Up Central With Rob Delaney in November 2018, adding to broadcast credits including performing on Sky One’s The Russell Howard Hour, Sky Arts’ Festival No. 6 and Channel 4’s Random Acts. In 2017, Rob released his third collection of writing and drawing, Take Hair with Burning Eye Books, adding to Petrol Honey and In Heaven The Onions Make You Laugh. In 2016, he released spoken word album At Home With Rob on Scroobius Pip’s record label Speech Development Records.Rob’s unique worldview has also been acknowledged through the Arts Foundation shortlisting him for the prestigious Spoken Word Award and Glastonbury Festival electing him the official ‘Poet in Residence’.

Who are your biggest influences on your work, poetry or comedy?

The first person I remember noticing on television was Ivor Cutler on BBC four doing a gig at the Bloomsbury Theatre. He wasn’t trying to impress anyone and I realised, wow, I hadn’t seen anyone like that before. He was being him. I hadn’t realised that this was show-business or what it could be.

When I was growing up the comedy I was watching was The Fast Show and Harry Enfield & Chums. I used to watch that with my dad. One of my biggest influences has always been Bob Dylan, I listened to his greatest hits album when I was young and I was blown away. Some of his lyrics are truly inspiring.

How do you feel about the term ‘stand-up poet’, is it something that you embrace or have an aversion to?

I don’t want to give the opportunity for people to tell me that it’s not poetry. I know what poetry is to me, like a good car reverse or a nice pass in football, maybe that’s more poetic than rhyming. Just because someone says it is poetry it doesn’t mean that it is. I think it should be left to the audience to decide what is a poem or not. My ideas are quite language-based. Some may have some poetic value, I don’t know. I’d definitely say things that I’ve written down but the phrase ‘stand-up poet’ puts the idea in people’s head that they’re going to see a poet who is trying to be funny. Other people embrace that term and that’s great, everyone is doing what they can, having a go. I’ve been to a lot of poetry events, there are a lot of gatekeepers who say what poetry is. Poetry should be accessible to everyone, everyone should be able to express themselves through paint, or words. It’s good to make things out of nothing.

Would you be able to talk through your new, seventh consecutive show, The Talk Show?

With my new show, The Talk Show, my focus was a bit more on mental health but I don’t really go into mental health directly. I want to say it without saying it, without banging on about it. Other people like MIND do a really good job with the awareness that they are creating. For me, I just wanted to do a show about isolation and the importance of talking. Talking about when you had a nice apple or celebrating that we are alive through speaking to each other. In my shows I talk about things that aren’t going to go away quickly, things like the colour yellow, hair, faces, and the sky. They are not temporary things; they are things that have stood the test of time.

I used to do a thing called Poetry Takeaway. We had a burger van that they had refitted and placed three poets inside. People could go and take their order like ‘What do you want your poem to be about?’ and we’d write it in about half an hour. It was like you were on the front line and got an insight into people’s lives giving them something that they wouldn’t expect.

With the shows I want to get people talking in the show, and after the show. I want people to have a timeout when they come to the show. We’ve all been born and I think trying to remain enthusiastic and optimistic is important. It is funny in parts and there are bits that are not funny. A lot of my favourite things like The Office or The Royle Family, the bits that are the most memorable are when the comedy is not on all the time. It’s good to have light and shade.

I don’t want to put myself in a box. I have an idea of what I want to be able to do in the show even if it’s not all jokes. Getting better as a performer is really important. Sometimes the contrast works where you get bits of raucous laughter and the bits of silence. You will usually get two or three people who are raucously laughing when everyone else is silent as well. I was doing one of the most emotional parts of the show at a gig once and three people were in hysterics in the front row. I knew there was no way for them to stop laughing so I just went with it. They feel like the naughty one at school, and you get a pack mentality if they are in a group. But no way am I going have a go at someone for laughing at a comedy show.

You’re doing 32 dates as part of this tour, is touring something that you enjoy doing?

The thing about touring is that you are on your own a lot on trains. It’s good as a you get to write. You overhear things on trains and in supermarkets. I started writing this show last year on tour. Although it’s 32 dates the show needs to take on a life if its own every single night. If someone heckles or shouts out it becomes fun for everyone, it’s part of the performance. Everyone realises it’s a live thing. That’s when it’s exciting. When it becomes a show which has never been done before and won’t be done again in the same way.

The Master and Margarita by Mikhail Bulgakov. I’ve started it before but never fully committed. I’ve been dipping in and out of it for 6 months. I started it in September and still haven’t finished it. I’m looking forward to finishing. I went through a stage of buying loads of books so I need to read those. I’ve got so many books now. I’m also reading Secret History by Donna Tartt and Fear by Thich Nhat Hanh which is all about mindfulness. That’s had the biggest impact on me recently.

The tour finishes in May and I’m starting to write my new show about time, which I’ll preview before this tour ends. So there is a crossover. I’m going to the Edinburgh Fringe in August. If you haven’t picked up a pen in a while it’s harder to get back into it. I think discipline is a form of self-love.

How can people find your work where you are?

Tickets for the show are on-sale now and available at www.robauton.co.uk

Bang Said The Gun is poetry extravaganza that has a monthly residency at the Soho Theatre.

Photo by Frederik Trovatten.com on Unsplash

Film Fails | 3 Movies That Were Bad For A Reason