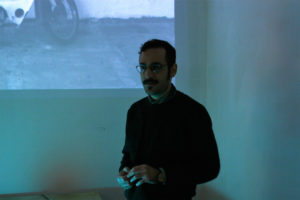 Stelios Hadjithomas (b. 1990, Cyprus) is an interdisciplinary artist whose work spans, and experiments with genres and mediums. He mainly works with text, speech, sound, and new media. His art seeks to mediate conscious/unconscious narratives, question the existential, and confront the nihilistic. His poetry has been published in various literary journals online and in print in Ireland and the UK. He holds a law degree and a master of arts in cultural policy and arts management. He is the editor-in-chief of Armarolla, a newly founded hybrid literary magazine.

Who are your biggest influences with regards to poetry? And Why?

My first introduction to poetry was as a student in school. We studied the Greek classics such as Seferis, Elytis, Cavafy, and Ritsos. I then started reading E.E. Cummings and T.S. Elliot on my own. These were some of my first influences, however I cannot say that I follow a certain style in my writing today. On the contrary, most of my work is experimental and hybrid.

The words I write on paper are largely observations on our society, the human experience, capitalism, war, growing up and made up utopias/dystopias. A lot of it does not necessarily derive from literary culture, but from cinematography, as well as visual and social media culture among others.

A few years ago I read an interview – I think it was with Jim Jarmusch, but I might be wrong – in which he said that he doesn’t like to consume other people’s work a lot so he eliminates the risk of imitating their work. I’m not sure if it was with Jarmusch, I actually don’t think it was – I’m very bad at keeping names, but that line stuck with me.

A lot of times I found myself reading something, then writing something, only to realize it reads or looks like somebody else’s work. I think it’s important to be knowledgeable in terms of what’s out there, but I also believe it’s important to maintain a distance in order to protect your originality – as original as someone can be.

Which contemporary poets are you reading currently? And Why?

I like reading literary magazines to discover new poets. A few names from the top of my head are Monica Youn, Kaveh Akbar, Ocean Vuong, and Florencia Varela. Also a lot of other poets whose work we’re publishing in our first issue of armarolla and whose names I can’t reveal just yet.

How important is place and the local, to your work?

Not as important as I’d like it to be. I’ve lived abroad for the sum of my adult life so far and I only recently returned back to Cyprus. I kind of lived in my own world when I lived here as a kid, so now that I’m back I’m trying to reconnect with my roots and get to know the place I come from. I’d say the place and the locale are as not as important, as the history of a space, especially colonial history.

Most Cypriots today are very confused about their identity and this is mainly a consequence of colonial rule. Cyprus has only been a sovereign state for 58 years. And occupied by Turkey for 44 of these. I would actually call us an infant state. So my work often reflects my personal, but also our national struggle to discover our identity.

How did Var Martialis come about? Science fiction is an obvious influence for you, on this section, how did the visual, audio and poetry come together?

I always had a big crush on space and sci-fi. I was one of the kids who said they wanted to be an astronaut when they grew up, but no one took me for real as that’s what most kids reply when they’re asked that question. If I could turn back time, under different circumstances, I would!

[perfectpullquote align=”full” bordertop=”false” cite=”” link=”” color=”” class=”” size=””]So how did Var Martialis come about… I simply started writing Elon Musk Wants to Send Us to Mars. When I wrote I had no idea how it would end up.[/perfectpullquote]

I just started writing and halfway through, I began having epic feelings about the work. I was like, this is it. This is the best thing I’ve created so far, I must do something different about it. Because I write in a certain way – I’m a visual type of guy, when I write I don’t just visualize the words on paper, I visualize the scenery, I breathe the air, the scent, I become the director – I knew this had to be narrated by an android. If one reads the poem carefully, they’d notice the android is gender fluid/less.

This was a very conscious, political decision I made, in which I saw the manifestation of gender construction; an android has no gender by default, it is a machine. But it can simulate the male or female, as constructed by its creator. So I chose a male speech synthesizer to juxtapose with the content of the poem. And this is how the audio came together. The visual was just a video teaser I made to promote the audio work, although I could produce a full video as part of a video installation/version of the work.

This is something I haven’t had the time to go through, but still considering. Mars was the only choice. As I said earlier, my work is often a political comment on current developments. As a result, I often interchange between reality and fantasy to produce a dystopian setting. That is largely the huge premise of sci-fi, to re-imagine realities gone wrong (or differently).

How has your MA influenced your work to date? Specifically the cultural policy element of it?

I learned two things from my MA, the first is policy-related: Everything is political. Art is political. Whether you oppose this when you create your art or not, it doesn’t matter. Your work will eventually have some political effect, whether voluntary or involuntarily. And second, I learned about grounded theory which kind of helped me realize that it’s ok to create as you go along. Not having an outline for a project from the start was a major source of stress for me in the past.

How important is the audio element of poetry for you in your process? How did you work with constraints of a narrative in the shape of the story you were setting up and making sure the sound and audio would be interesting as well?

It depends. Some work can stand independently on paper, because it’s meant to be on paper. Other work needs its audio or its visual counterpart. Songs for example, are poems, technically speaking. Would a songwriter imagine solely the lyrics, without the music?

I think of myself as a versatile artist. I don’t like constraints. I don’t like being restricted. I imagine it, I do it.  Audio is not always important. Usually the work itself, and sometimes the creator will determine the medium. As to the second part of your question, there were no constraints when producing Var Martialis. I did not attempt to create something interesting, nor did I make sure of it. I simply wanted to create, and I did. If the result is interesting or not, that is purely subjective and for the audience to judge.

How do you find working across disciplines? Do you feel this frees you up to experiment with genre more than traditional poets who don’t have an artistic background?

Definitely. I think being able to master different disciplines is a huge privilege and a challenge at the same time. From a young age I used to challenge the rules. I like to do things differently. Not for the sake of doing them differently, but because doing things your way helps you grow as a person and achieve a level of personal and professional gratification. I don’t want to compare myself with other poets. I like to think we all do the best we can with the tools we have. I don’t see working across disciplines as an advantage or in relation to other people. I just see it as a reflection of who I am and my identity as a person and an artist.

What are you working on right now/next?

I’m currently working on launching the first issue of armarolla in spring. I have also been asked to participate in the Imago Mundi project by Luciano Benetton and Fondazione Benetton, and I’m working on a few other projects for which I can’t reveal any details yet.

Photo by NASA on Unsplash

In The Shower with Taz and Marcus | Why Do We Say Cheese In Photos?