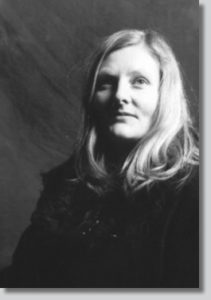 Lucy English is a Reader in Creative Writing at Bath Spa University where she is head of the Creative Writing Research Centre. She is a spoken word poet and novelist. She is co-director, with Sarah Tremlett, of Liberated Words, a CIC company, which creates, curates and screens poetry films. Lucy’s recent digital project,  The Book of Hours, is a reimagining of a medieval book of hours in poetry film format. Films from this project have been screened at many international poetry and short film festivals including Visible Verse, Canada; Weimar and Zebra,  Germany; Lisbon, Portugal; Juteback, US; O’Bheal, Ireland; Poole Lighthouse and Newlyn in the U.K.  She is researching the placement of spoken word in poetry films. – http://www.lucyenglish.com

What/who are your biggest poetry influences?

This is an interesting one as my influences come from two directions, page and stage. I did not know much about spoken word poetry until the mid nineties and until then my poetry reading had been pretty conventional. By my teens had read the usual UK canon of poetry, Shakespear, Donne, The Romantics, Tennyson, Larkin, Ted Hughes and at university I read more American poets such as Sylvia Plath, William Carlos Williams and Gary Snyder. I was particularly interested in The Beat Writers such as Ginsberg and Kerouac. When I started doing spoken word in the nineties I realised there was a whole separate ‘canon’ of poetry I knew nothing about, with writers such as Saul Williams, Taylor Mali, Buddy Wakefield  so I started to read those.
You will of course note that most of the above list are male and I became aware that the examples of ‘good poetry’ that were put in front of me were written by men so I started to look out more for female writers. These days I tend to read work from female poets and I read both spoken word and ‘page’ poetry. I love Salena Godden, Joelle Taylor, Patience Agbabi and the work of the so called ‘Radical Landscape Poets’ such as Harriet Tarlo. I love poetry which makes me feel shivery with its use of language or form and poetry which is spell binding in performance. So, the answer is I have a pretty eclectic range of influence. For The Book of Hours I read Rilke’s collection of the same name to understand how a poet had used the medieval format.

You’re a successful novelist, poet and filmmaker, do you find that the creative processes are drastically different or compliment each other well when your moving between the mediums?

I don’t actually ‘make’ films! I work in collaboration with film makers! What I have learned from making short films in collaboration is that there is a visual language which although I was aware of I hadn’t fully taken on board how this works. I was so used to looking at films I wasn’t analysing them. I have now got a deeper insight into how using images affects the viewer and how a film maker doesn’t need to ‘illustrate’ what is in the poem. The language of film isn’t necessarily narrative; we are shown a series of images and we ascribe ‘meaning’ to them. Obviously when writing a novel there is a narrative structure which I don’t need if I am writing a poem or making a poetry film. I have a visual imagination and I have really liked exploring the world of visual images in poetry film. It’s going to be interesting to see if any of this is transferred to my writing of fiction. Perhaps my prose will become more ‘poetic’ and less led by ‘story’!

Congratulations on the ACE funding for the Bristol Poetry Festival. How did that come about?

I was approached by Danny Pandolfi, who runs Raise the Bar spoken word events in Bristol and he wanted to know how to write an ACE funding application, and I was so delighted that a Bristol Poetry Festival might happen that I offered to write the bid. No funding application happens without hard slog! I was working on it for three months! We have a great team, Danny, Tom Sastry, and myself, with a good range of skills and ambitions. The festival is small this year with a teeny amount of money but we hope this will be an annual event. Our chief aim is to showcase all the wonderful poetry events already happening in Bristol, not just spoken word, and celebrate the energy and hunger for poetry in this city.

Your new collection The Book of Hours has been described by Phillip Gross as ‘a brilliant ‘frame’ into which very different inputs can ‘flow’.’ Is that something that you were actively seeking in the creation of the work?

What I wanted to do with The Book of Hours was to create a ‘collection’ of poetry films which can be viewed individually or as a sequence. Poetry films are usually created as stand alones but I wanted to expand this and create a ‘book’. So I approached it like a book. I wanted there to be themes and ‘stories’ which run through the whole collection. It was an experiment and I didn’t really know how people would react or respond to it. I love Philip’s comment, because the feedback I am getting is that people take away all sorts of different experiences from The Book of Hours. Each film conveys a different ‘mood’. I wanted this project to be a reflective one and I seemed to have achieved this.

I have just bought Melanie Branton’s new collection. She is a storming presence on the Bristol Poetry Scene right now. She is witty, clever, engaging and a strong example that an emerging spoken word poet needn’t be ‘young’. I am also reading Mara Bergham, who I saw at the O’Bheal Festival, Nora Gomringer, and Alice Oswald.

What next? Are you working on a new project?

I am in the process of writing up the critical paper for The Book of Hours for my PhD. I hope to finalise this for my June deadline. I am also planning another poetry film project! I want to do something bigger and more landscape focused. Something which combines a walking project with poetry films. It’s early days but I am thinking it through. I have also got a new idea for another novel. I just need more time to work on all this!

How/where can readers find your work?

The website for The Book of Hours is here – https://thebookofhours.org/
My poetry is published by Burning Eye Books. –https://burningeye.bigcartel.com/product/the-book-of-hours-by-lucy-english