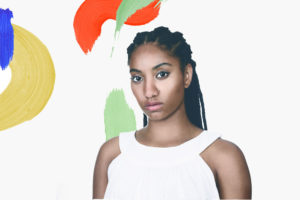 With over 14,000 YouTube subscribers, two TED Talks and a Nike collaboration under her belt, Sophia Thakur is emerging as one of the most exciting and vital young voices in spoken word. A poet, model and motivational speaker, her work resonates with disenfranchised youth, highlighting racial and social injustice. Following her breakout performance at Glastonbury Festival 2017 Sophia recently performed with musicians from London Symphony Orchestra as part of UnFOLD’s collaboration with Jerwood composer+ Jasmin Kent Rodgman at LSO St Lukes.

What are your biggest poetic influences?

Does music count as an answer? How far is Hip-Hop from poetry anyway? I grew up listening to some of the best story tellers in the world. From Nas, to Cyhi, to my Pastors in church. I’ve always been immersed in this world of journeys and poetry is where I create my own. Music is definitely my main influence. The ability to transfer a feeling through art is ridiculously beautiful and SUCH a skilful craft when studied.

How did you find the experience of performing your poems to instrumentation for the UnFOLD project?

Unreal! It’s always been a dream to shake my poems. Bringing music into the fold (haha) has added a new layer of life and meaning to the poetry. It’s another layer to add to the feeling I want to get across. The musicians are an absolute dream to work with. They humoured my somewhat out there ideas, and made them great.

What’s the experience been like to collaborate with different artists from music to illustration in the UnFold project?

As I said, it’s seeing the same sentiment carried through different mediums of art. It’s so humbling. It’s inspiring and it’s possibly the coolest thing I’ve been involved in. Bringing poetry out of the dark ages.

Your poem Dance is the first to be released in the UnFold series, could you talk about the origins and process of this piece?

So I lost a really good friend to Cancer just over a year ago, whilst we were creating. He is the soul of that piece. We shared a love for dance and poetry, and he was the nucleus of love in my life. Everything about that poem is about Alexander King Paul. The more rhythmic Hip-Hop elements come from his love of 90’s rap. The slower sections are for his Neo-Soul and the rest are lessons that he has taught me over the years. The afro-beat undertones as essential as King and I loved to dance, we loved Africa together. I remember walking into the first rehearsal and playing some crazy rhythmic reference songs, and then just sitting back and watching strings, drums and piano create this afrobeat vibe.

I’m actually writing my first book so I’m reading a lot of me haha. I’ve just finished Warsan Shire’s recent collection, and I’ve moved onto my mate Rudy Francisco’s collection. I’m also learning the earlier works of Rumi and Khaled Hosseini who isn’t defined as a poet but he really should be because, wow.

Whats next in your work?

With headline shows at Brighton Festival (at invitation of Kate Tempest), Roundhouse, Rich Mix and Love Supreme Festival; collaborations with London Symphony Orchestra and recent solo performances at Lovebox and Citadel already under their belt, the UnFOLD tour takes in six dates between October and December 2018 including Tate Britain, Kings Place London and Band on the Wall Manchester. A spellbinding 60 minute live performance featuring five incredible spoken word artists, alongside a full band and the London String Collective with visual art by Joanna Layla.

VR Gaming and the Technology’s Impact on the World