In A Poetry Handbook, Mary Oliver states that entering a poem is like, “stepping into a rowboat, with a stranger at the oars.” Liz Quirke’s debut collection, The Road, Slowly, brought me into a new and fruitful land. One where the female body is not just a vehicle of reproduction but of love, nurturance and choice. Quirke lives in Galway with her wife and two daughters.

Quirke is a PhD researcher in NUI and has been nominated for a Hennessey Award as well as The Cúirt New Writing Prize. Quirke uses her familial experience to create art that transcends the tired notion of the nuclear family. Often her poems act as the “spoon” that reflects to the reader “the image of (their) own distortion”. She raises awareness against fixed ways of thinking to create new possibilities of being. This is the poetry that needs to circulate amongst Irish young people to ensure Ireland remains progressive.

Quirke is honest and raw as she unfolds the internal struggle caused by being a non-biological mother. In the mirror poem, “Reflection,” the speaker “can’t avoid this body/ that did nothing to make her.” The self-image of the persona becomes the obstacle she must overcome. Quirke is quick to outline the effect of societal ideation on the character’s self-esteem. The persona feels the burning eyes and suffers the intrusive questions of other women in “Counterfeit.”

Moreover, a slip of the tongue can cause chronic dysmorphia. In “Lucky,” a stranger tells the speaker that she is privileged to be childless as they are “horrible little things.” Quirke’s use of assonance creates biting tones that are difficult to digest. What one considers small talk can seem to another as “dart-like demands for clarity.” Her work stands as a warning of how unsolicited opinions can alter self-perception and create disharmony.

Quirke’s poetry is at the same time aesthetic and highly political. I hope to see it on our national curriculum in years to come.

Eventually, Quirke’s persona knows that there is “more than blood between” herself and her daughters. As she has said in the Irish Times, Quirke writes herself into motherhood. She uses it as a tool to outline the devotion of the mother, regardless of her reproductive history. “All I have for you is my heart, my brain, my list of things/ all but those nine months when I was waiting.” The enjambment and asyndeton remind the reader that this list is never-ending. Poetry becomes a medium of self-validation and a woman recognising her worth is a powerful and all-consuming vision. 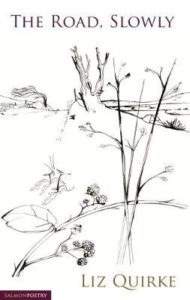 Quirke does not sugar coat fertility treatment. It is not all baby showers and playroom painting. Instead, we are met by cold, concrete waiting rooms where “chairs are a decent size,” so “couples don’t have to touch each other.” She shows the crippling anxiety of the passage of time through the “absence of kiddie cutlery” and the onomatopoeic “flutter of another calendar leaf.”

She does not glorify motherhood. She balances the celebratory images with the weight of maternal responsibility and the desire to escape back into the past. “Part of me is waiting/ at the door for you.” The door is a symbol of the threshold between the alternative universes in her collection.

One where the persona and her wife know “only the heat/ of each other for a week,” and scrawling their names on bathroom stalls. To another where “4am feeds and bowls of cereal” are the norm. Quirke depicts family life in a wholesome and authentic manner, leaving out none of the monotony and imperfection in their “slope of a home.”

Most significantly, Quirke’s collection celebrates youth. It honours jumping on beds and fairy doors, the belief that rainbows should come before rain and, “tiny stones in polka dot pockets.” Through the fresh eyes and voices of her daughters, Juno and Nova, she reminds the reader of what’s important: presence and curiosity. An adult minute is stressful, heavy and counted but a child’s minute is “colouring/ sleeps and outside, always outside.” By preserving these snippets of Nova and Juno’s development, she reignites the desire of the reader to step back into that sense of freedom and wonder.

Liz Quirke redefines motherhood to something that is spiritual, empathetic and compassionate. The societal ideology of the nuclear family has changed in Ireland and Quirke’s poetry is a celebration of that change.

The Road Slowly can be bought from Salmon Poetry Here

Photo by Sharon McCutcheon on Unsplash

Molly Twomey is a Hatha Yoga Teacher and receptionist who will enter a Masters of Creative Writing in UCC this September. Her poetry has featured in the Irish Times where she was shortlisted for the Hennessey Award. She blogs for The Mighty and Spunout.ie and is an editor of The Quarryman. She has been listed for Over The Edge New Writer of the Year and was a featured poet at Over the Edge Open Readings Series. She is an action panel member for SpunOut.ie and has been offered scholarships for Creative Writing in both NUI and UCC.

‘Does it cause a little chill in your heart?’| Interview with Theo…