Happy New Year! Bells have been jingled, eggs have been nogged – Christmas is boxed up, back in the attic – and we reluctantly return to the daily grind that is January. But, despite the weather, it isn’t all doom and gloom. Poetrybeat brings you the highlights of the Poetry and Spoken Word happenings around Ireland this month.

Christmas is officially over on 6 January, which also marks the celebration of Nollaig Na mBan or Little Christmas – the day when, traditionally, Irish women were ‘allowed’ a day off after all their hard work during the holiday season and men had to shift for themselves. Bless. This year, instead of putting your feet up, why not head along to the Irish Writers Centre for a contemporary spin on Women’s Christmas where special literary and poetic guests Erin Fornoff, Evelyn Conlon, Joanna Walsh, Lisa McInerney, Mary O’Donnell, Michelle Read, Sally Rooney and Sinéad Gleeson will be taking to the soapbox and putting the world to rights. Books Upstairs will also be setting up stall for the night and, for an extra treat, guests are encouraged to bring along a much-loved book by a female writer, wrapped in newspaper and labelled with a description of no more than 3 lines. If you bring a book, you get to go home with one too! More information at The Irish Writers’ Centre.

Women of the West, step up! Over in Galway, a soapbox and chats are also on the menu for Nollaig Na mBan celebrations at Tigh Neachtains on 6 January at 8pm, organised by the excellent Elaine Feeney, poet of that parish.

The year kicks off with the First Fortnight arts festival, where the focus is on challenging mental health prejudice through the creative arts. Founded in 2009, this year’s festival includes Music, Film, Theatre, Visual Arts, Comedy, Dance, as well as Spoken Word and open discussions, at venues around Dublin. On the Spoken Word front, look out for two crowd-sourced storytelling events: The Dublin Moth StorySLAM: Seize the Day, on 11 Jan at The Sugar Club, Dubin 2, and Milk & Cookies Stories: ‘All Life is an Experiment’, on 12 Jan at The Teachers’ Club, Dublin 1. Events are open to both storytellers and appreciators of fine story-telling – the StorySLAM offers 5 minute slots to potential tellers of tales, while Milk & Cookies promises a more laid-back atmosphere of beanbags and cookies! More info at First Fortnight.

Three of the most exciting literary journals on the Irish scene – The Penny Dreadful, The Stinging Fly and Gorse – have joined up to bring a literary smorgasbord to the Liquor Rooms in Dublin, Thursday 7 January, from 7pm. Readers include Joanna Walsh, author, fiction editor of 3:AM Magazine and creator of the #readwomen hashtag on Twitter, Alan McMonagle, whose debut novel, Ithaca, will be published by Picador in 2017, Sam Coll (Tramp Press, Granta, The Stinging Fly) and Nicole Flattery (The Stinging Fly), along with poets D. Joyce-Ahearne, chair of Trinity Publications (The Bohemyth, The Incubator, Berfois) and Dean Browne, winner of the 2011 Cuisle Poetry Competition (The Penny Dreadful, The Shop, Poetry (Chicago), Southword). More information at Dreadful / Stinging / Gorse. 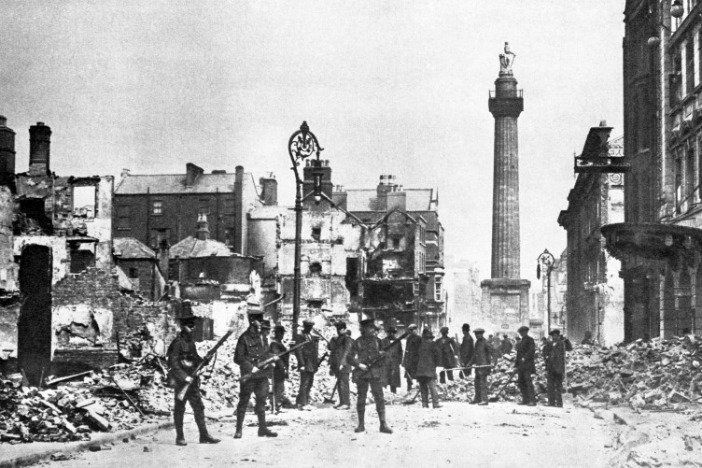 There will be 1916 centenary events a-plenty this year, and first out of the gates is Cork poet Colm Scully‘s Breakfast with Pádraig, a collaboration with Leitrim writer, Conor McManus, performed through the media of Poetry, Story, Song, Music and Film, and taking place at Ó Bhéal, The Long Valley Bar, Cork on Monday 11 Jan, from 9.30pm. Sometimes funny, sometimes thought provoking, it promises a wry, sideways glance at the 1916 rising and the shadow it has cast across our collective cultural consciousness.

Happy Birthday Over the Edge!

Stalwart of the Galway literary scene, Over The Edge celebrates its thirteenth birthday this January! To help them celebrate, organisers Kevin Higgins and Susan Millar DuMars will welcome Stephen De Burca, Nuala Keher and Vona Groarke – renowned poet and current editor of Poetry Ireland – who will also launch issue six of Skylight 47, the bi-annual poetry paper from Galway’s Skylight Poets. There will be an open-mic after the Featured Readers, as usual, and contributors to the new issue of Skylight 47 are particularly welcome to read their published poems at the event. Over The Edge takes place at Galway City Library on Thursday 21 January, from 6.30pm. More info at Over The Edge.

Poetry Ireland Introductions series, which offers a mentoring masterclass and a showcase reading at the International Literature Festival Dublin, to promising unpublished poets in Ireland, is open for submissions until 29 January 2016. It’s an amazing opportunity for poets who are establishing a track-record of publication in literary journals and are building toward a first collection – to see the impact of the scheme take a look at Headstuff’s interviews with previous Poetry Ireland Introductions alumni. More info at Poetry Ireland.

Also, Headstuff are accepting poems on the theme of Revolution NOW until 5 Feb — see our current call for submissions for more details. For more information on opportunities for poets, take a look at this list of poetry competitions and submissions for January 2016..

If you have a poetry event coming up in February that you’d like to see featured here, send details to [email protected] by 25 January, for inclusion in next month’s Poetrybeat.

Exhibitions: “Oradour, Elegy for a Town,” “Revisions,” and “Inside and Out”

Let It Snow |1| The Weather Outside Is Frightful