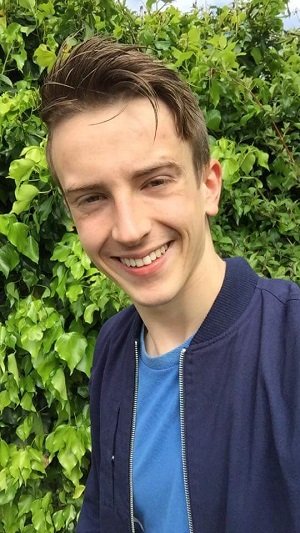 How did you got into poetry?

During the Leaving Cert. The English syllabus, in particular, puts a lot of emphasis on the imagination, so I’d hand up a lot of short stories to My English teacher to correct. Her name’s Ms. Feeney and she just so happens to be a very accomplished Irish political poet. She saw some potential in me and asked me to write a poem, so I did. It was called ‘Nursing Home’ and two months later it was published in the Fighting Words supplement of the Irish Times. I was intrigued by modern poetry thereafter. That’s where it all began for me.

Stephen Murray – the manager of Team Ireland Brave New Voices – jumped onto the scene shortly after my first publication. He transformed my interest in poetry into a blast of excitement when he introduced the new element which was performance poetry. Also, the videos I’ve been seeing from the festival, we’ll all soon be a part of, were pretty awesome and got the mood going.

Do you get stage fright and how do you cope with it (I know I do!)?

As I see it, there’s never really time for stage fright. Any chance you have to be on stage and grasp the attention of a crowd is a blessing. So I stick my nerves into my back pocket and get on with it. I always make sure I’m prepared, so I don’t particularly have the patience to entertain those last-minute reservations.

Who are your absolute favourite poets and why?

Stephen Murray and Elaine Feeney. They’re the only ones I know really. It’s hard to build a relationship with a poet you’ll never meet anyway. Instead of having to find meaning in their poems, I just text them and ask what this or that line is about. It must be very annoying for them, however.

What do you think of the poetry you’re thought in school?

Boring, tedious conservative and dull. And that’s a ubiquitous feeling. A recent survey carried out by the CSO has proved that over 80% of Irish Students hate it too. I think this is reason enough for projects like ours to be implemented. We want to prove that poetry can be enjoyable, upbeat and interesting.

Where do you see poetry taking you?

Through college. It’s major stress relief for me.

Are there things that you hope to achieve through poetry?

I’d like poetry to cause a few Eureka moments for me. If I ever turn out to be one of those poet poets who see deeper meaning in trees and chimneys, I’d love to discover something major and just sell it off and to make some money. Poetry is a lovely trigger, or so they say.

What do your parents think of you becoming national poetry stars over night?

They were very excited for me after my first big publication and making Team Ireland. Though, over the months, all of the newspaper cut outs and discussions with family and friends on their son’s achievement, has undoubtedly worn them out. Their expectations do increase after the flair of one achievement wears down, so that keeps me working even harder on the next one.

What would you say to other young poets that are too afraid to put their words out there?

After you reach the peak, you feel relief. After climbing a mountain, you get to slide down a smooth steep slope. It’s hard to let the words slip out, but believe me, when they’re out you feel lighter and more refreshed. Initially I was afraid of delving into the darker issues and ones that really hit home with me, but when I did, I’d noticed myself beginning to overcome huge problems such as my depression. And the things that really effect you or cause fear in you, end up coming out as the best combination of words at the end of the day. [iframe id=”https://www.youtube.com/embed/aKmLbX0TG1c” align=”center”]