Sarah Clancy, being all kinds of awesome, agreed to meet me for an interview in a small café in Galway last month. I had met her once before, at an Over The Edge reading, when I was but a young lass, and she had complimented a poem I had read. Since then, I have, *cringe-ly*, always introduced said poem with an enthusiastic, “Sarah Clancy told me once that she liked this poem and that makes it super cool”. She recently won The Irish People’s Poetry Prize for her poem ‘And Yet We Must Live in These Times’. Her confidence and delivery onstage is really remarkable, and I was STOKED to meet her properly (Is that a thing people say anymore?).

Would you say you’re more into slam poetry than you would be into traditional poetry?

I didn’t even know there was such thing as performance poetry, really, when I started writing. When I read my own poems in public I was so nervous. So nervous, and I was really surprised because I didn’t have a problem with public speaking. But there’s something weird about it, something weird in the fact that you are out in public and you’re saying “I wrote this and I think it’s okay”, because just by reading it, you’re telling people you think it’s okay, and that was so not Irish. I didn’t realise that I would have an issue with that.

I’m always speaking for different causes and workshops, and all of a sudden I was physically incapable of reading my own stuff. Once I started that I decided to read my poems in public every time I got the opportunity until that nervousness was gone. Some of the things that were on at that stage were North Beach Nights and Over the Edge, and there were other different things going on. I read at each one of them until… well, not until I didn’t feel nervous anymore, but until the nervousness wouldn’t stop me reading a poem. I was only doing it to combat nerves, but I found there was something much more creative about it – when you recite your poems, it is a fantastic way of refining your poems.

I think my favourite poem of yours is The Night After The Assassination, when you talk about swallowing condoms full of the starry sky to smuggle them home for someone. Would you say a lot of your poetry is love poetry in some way?

Can you remember how or with whom these love poems began? 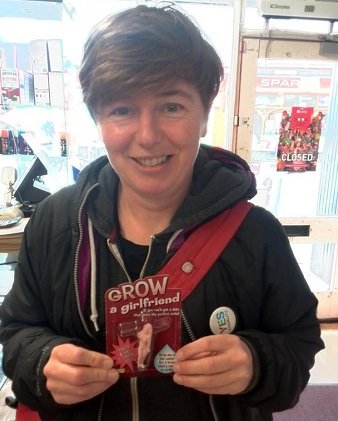 No. But I also have a few poems that people assume were love poems and weren’t at all.  I’ve written poems before where people have said “that’s a great love poem” and I’ve thought, that’s weird, it was just whatever way I had phrased it. Some of them are made up. There’s one poem of mine, Ringing in Sick to go Mermaid Hunting. It’s about all sorts of things with all sorts of people and I wrote it as if it was one lovely day. Most of the situations weren’t even romantic.

There’s a great friend of mine and there’s never been any romance between us – though all her friends are convinced that she’s a lesbian because she hangs out with me so much – she sings this song… She hates it actually, but I like it, called The Dimming of the Day, so I was going, ‘I’ll stick her in there’, you know the way music can get through to you emotionally, so at the end of this poem she’s singing a song for me at the bar. It sounds like a romantic poem. Another friend of mine – again, no romance – we went swimming with a dolphin one day in Blackhead and it was one of those odd things. And then there’s my actual ex-girlfriend who might have been on such a trip with me. She’s in there. That’s what’s so freeing about poetry, there’s no obligation. You can be very truthful without it being factually accurate.

When I found out about it first, I realised spoken word poetry was used by a lot of people to get across political views and to bring really important stuff to light, like mental health and feminism and the LGBT community and so much more. Do you think poetry is a good or an effective platform for people trying to bring about awareness, for issues they feel are really important, to people who aren’t really into traditional page-poetry?

I think it’s brilliant. There are lots of purists saying that if art has to be ‘for’ something, then is it art… I say, don’t mind them. I actually think that the majority of the arguments people have between spoken word and page poetry in Ireland is about class and gate-keeping. Now, most people don’t mind; a good poem is a good poem, whether it happens on a stage or on a page (poetry in motion, people.). And a good poem is a rare thing.

One of the things I think is really interesting is that everybody who criticizes slam poetry criticize it for being self-indulgent… But the amount of shite that’s found in books is shocking, too! Name me twenty books of poetry published in Ireland that have really made you say, “Wow”. A lot of people have an interest in poetry, but there’s only a small readership for poetry.

The first book I ever published sold loads. For a poetry book. Which is, about a thousand copies. But that’s loads for a poetry book! There’s not a big audience for individual collections of poetry, yet, something that you stick on YouTube could get 10000 hits. That’s not to say all those hits are people actively engaging with the poem, but is there people 10000 picking up a book of poetry.

It wouldn’t even need to be performance poetry. A lot poets are slow to embrace this change. The absolute best medium for Irish poets is radio. People are always asking me do I want to do Electric Picnic. I’ll have camped and I’ll have been uncomfortable and I’ll be over the thought of getting a free ticket.

Would you be able to draw for me a self-portrait?

What?! Why is everyone so unwilling to draw a self-portrait… 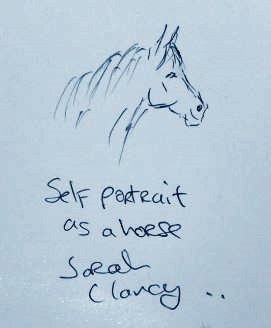 Oh no no, I’m completely willing! I’m just not able.

I can draw a horse. I spent years drawing horses in school.

You’re grand. Stop tormenting yourself. You are what you are. There’s nothing wrong with you. Mind you, there’s a list. Other people are very busy worrying about themselves, they’re not worrying about you. I think, when you’re younger your life must go according to plan and you just dwell so much on embarrassment and you’re all the time thinking, “Oh goodness, did I do this”, but then, as you get older you just let yourself off the hook. “Did I commit genocide today? No I did not.” That’s a good day.

Meabh Ann McCrossan is an eighteen-year-old poet from Galway. She writes in a way which has been described in the past as "self-deprecating". Once, she wrote a poem about her distaste for Mathematics for her Mathematics teacher, who subsequently asked her to sing at his wedding. Therefore, she is a walking example of where poetry can get a person. Currently studying for her leaving certificate exams, Meabh Ann is maintaining the poetic lifestyle within the walls of the school building by all means possible  wearing literal flowers in her hair and listening to The Smiths at least once a day. Meabh Ann writes poetry and short fiction and complaint letters to chocolate companies.

Kumiko The Treasure Hunter – A Film To Be Enlightened by… Eventually