WHY I BROKE UP WITH SEAMUS HEANEY, OR WHY IT’S GOOD TO BE UNCERTAIN

Let me ask you a question that you don’t have to answer.

Have you ever had a boyfriend who was really nice and really considerate, but with whom the sex was nonetheless not really amazing because he had a habit of doing things like taking off all your clothes – and all his clothes too – and then saying something very earnest like “I’m interested in your pleasure” or “I mean it, I really want to make you come” before setting about your genitals and breasts – if you have breasts – with some combination of hands and mouth and who knows even toys maybe in a way that is definitely pleasurable and would, had he not said what he said, probably make you come but because he said “I want to make you come” or somesuch you feel this pressure to feel pleasure which is stopping you from feeling pleasure because you need to be relaxed to feel pleasure and you can’t relax because you feel this expectation weighing you down as though the enjoyment you ARE getting from what’s going on is somehow invalid or unsatisfactory because you SHOULD be moaning and spasming already, why aren’t you moaning and spasming already, what’s wrong with you, and consequently the whole thing – while great on paper – just isn’t doing it for you?

That’s how I feel about Seamus Heaney.

By anyone’s yardstick, Seamus Heaney is a great poet.  He has a strong sensibility, an enviable clarity.  He says precisely what he means.  Clive James loves him because he is preoccupied with expressing things powerfully and concisely, what he – Clive James – calls “accessing bedrock”. 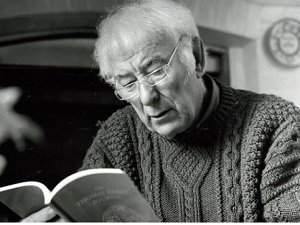 All poetry is crafted, of course, it doesn’t spring magically from your subconscious onto the page.  Someone, at some point, sat down and decided what words would be read or said.  Much like a musical  Impromptu is often a laboriously pre-composed piece, though, a poem can feel spontaneous and in-the-moment.  A poem can rant, tease, question, wonder, work things out.  Poetry’s deliberate, but it doesn’t have to deliberate.

You might offer the defence that a poet trying to express their own feelings, at least, has every right to be definite; after all, who knows better than they do how they feel?

In a previous article, I said that Gerard Manley Hopkins can take four lines to decide what he means.  The lovely thing about the poet being occasionally unsure, I find, is that you can be unsure too.  If they struggle to express what they mean, you become implicated in that process; you wonder along with them, you try to understand what they want to say but have not actually said yet.  You become the friend who prompts the friend who can’t find the right words to express themselves; as such, the words of the poem are the starting point, rather than the terminal point.  This is an active process.  If everything in the poem is definite, taken as given, then I sometimes feel more like a passive recipient.  Student in a schoolroom, more so than mate in a coffee shop.

Heaney doesn’t chat to his reader, I feel.  He pronounces from the mountaintop.   Emily Dickinson is another poet who leaves me cold for this reason.  She has one register, and that register is Stating Facts.  Did you know Hope Is A Thing With Feathers On?  Did you know that After Great Pain, A Formal Feeling Comes?  Some people say that all poetry is ultimately a conversation with yourself, but I’d quite like if it was also a conversation with the poet.  If I wanted to be told facts, I’d go browse Wikipedia. If that’s what I don’t like, what do I like? 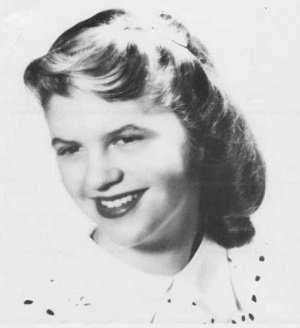 Sylvia Plath.  I love Ariel, collection and poem both.  The poem is one of my favourites; it’s content to describe moments – some violent, some not – and let you characterise the aggregate experience yourself.  It has bags of confidence, but all of that confidence is channelled into constructing elaborate sounding relationships.  Substanceless blue / pour of tor and distances.  YUM.

Kate Tempest.  Give.  It’s a command “Give me”, but it’s softened by the repetition; she knows what she wants, but not what to ask for.  There’s something nice about list-based or schematic forms, because it acknowledges from the word go that this is an attempt at expressing something.  If I haven’t gotten it by the end of this verse, then I can just do another verse to try and say it better.  And this is a lovely, raw, honest poem which keeps building as it adds detail to one overarching feeling.  The line “Give me a body that doesn’t hurt” always hits me hard. 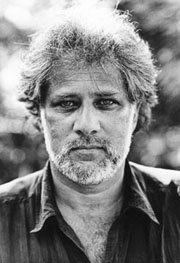 Declan Donnellan, in his deadly book The Actor and the Target, sums it up like this:  if the speaker had said exactly what they meant, they would have stopped talking.  If they haven’t stopped talking yet, then they don’t think you get it yet.  In other words, they are not satisfied with what they have said.  So, far from loving each Lovely Image(TM) equally, you should hate every single image except the last one.  And even that last one probably isn’t great, it’s adequate at best, the most you can say is that we can move on at least.

I can never quite get this thought out of my head when I am reading poetry, and it means I can’t help but read Heaney’s measuredness as disingenuity.  And so, I will leave you with four questions to ask of a poem and yourself.

(In fairness to Heaney, I think Mint is great.  I really like Mint.)

Dylan Coburn Gray writes for theatre, both music and words. His play Boys and Girls won the Fishamble Best New Writing Award, was shortlisted for the Stewart Parker Award, and got a rhyming review in the Irish Times. I know, right? [email protected]

SENTIMENTAL BEASTS AND WHERE TO FIND THEM

A Metaphorical Platypus and the Art of Rhetoric

How and Why to Memorise |2| INSANITY BEGINS

How and Why to Memorise |1| The Wreck of the Deutschland