Stella and Anna are 16, they meet and fall in love, for Stella their love is destined. She is captivated. But Anna has a decision to make; she needs to choose between Stella and Mr Sorensen, the English Teacher.

Stella Full of Storms is the latest production by the Cup Theatre Company, created and led by an all female ensemble. The play deals with love and obsession and fulfils the young company’s prerogative to generate more strong female roles in Irish theatre. Hence we meet Stella, a hopeless, flawed young person, in love. A character many will recognise and relate to.

This is a one woman act, with Clodagh Mooney Duggan playing the role of Stella ‘It is wonderful to be able to do so with a script that means so much to me and with such a talented team behind it’. Duggan speaks of how relatable a character like Stella is. ‘I identify with Stella more than any character I have ever played before. When you are that age you feel everything so deeply without the knowledge of how to protect yourself or guard yourself from it. It is heartbreaking to love someone so completely, knowing that they will always love someone else more, and to some degree we have all been there’.

Stella is portrayed as an anti heroine, a character who we don’t always warm to. The audience might find themselves becoming frustrated with her stubborn nature. ‘I find flawed characters so interesting to watch on stage’, says Clodagh, ‘and so satisfying to play’. Director, Sarah Finley says, ‘For me it’s someone who isn’t necessarily always likeable, but stays sympathetic’. While Stella might frustrate us with her obstinacy, the women hope she will provoke a feeling of familiarity in their audience. 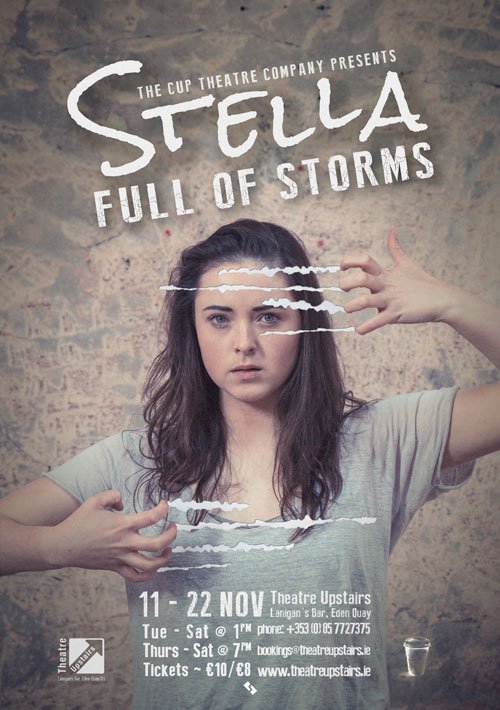 The company has produced an impressive body of work since 2013, notably ‘A Picture of Us‘ a (Sort of) musical, which was invited to perform at Electric Picnic and has been commissioned by RTE Radio One. For writer Kate Gilmore, it was important the play represented the company’s primary goal – to give a voice to young females ‘Our primary goal was to produce work for ourselves. Now, that goal has shifted slightly and we strive to challenge and question our approach to theatre, as a nation. With complaints such as ‘there aren’t enough roles for women’ rife in the current climate, we present a principally female team on this production’.

‘I also think we can’t underestimate the importance of giving young female characters a voice, and especially a gay woman. It’s crazy but there still aren’t enough stories with these characters at the centre’ says Finley. This is the first time director Sarah has worked with the ensemble and has been very impressed by the work so far ‘These guys are driven, hardworking and above all super, super talented.’

Clodagh says ‘I would strive for The Cup to continue down this path to learn and grow as much as it can, by working with different directors and hopefully creating work that will speak to people and will have a long lifespan.’

This company experiment and play around with jobs and roles. Writer Kate, who played Nora in ‘A Picture of Us’ says, ‘We mix and match jobs here. At one time or another, we’ve all acted as writers, performers, directors, producers and technicians. We all have individual opinions on the type of work we’d like to produce; however, that diversity has been harmonious thus far, there is a common thread of, if nothing else, devotion.’

Football and Murder: The Deadly Game

Review | The Weir has nothing between the lines