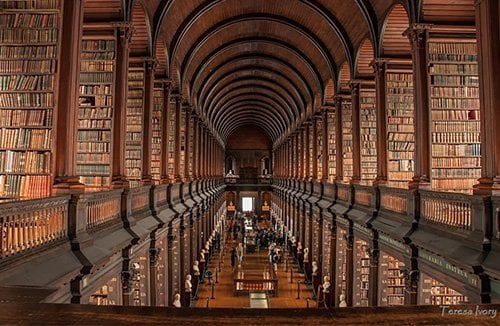 A love note to a library? How often do we take the time to sit down and spill our hearts and feelings onto a page? If you are reading this and thinking ‘never’ then shame on you. Book Week Scotland has chosen a number of writers to pen a heartfelt, handwritten note to their most loved library. Why? Because libraries are delightful and deserve to know it.

The longlist for the International IMPAC Dublin Literary Award has been announced with 142 titles from 39 countries chosen for the €100,000 prize. Five Irish novels have made the longlist for the award, which is managed by Dublin City Council’s library service. All of the novels nominated are available for readers to borrow from Dublin’s public libraries. The full list of titles is available here and will give you some great ideas for Christmas reading. The shortlist will be made public on the 15/04/15 and the Lord Mayor will announce the winner on the 17/06/15.

Hollie McNish, internationally acclaimed poet and spoken word artist will perform in the Sugar Club next May 2015. For those of you who can’t wait until then you will find a collection of her poetry here.

We rarely stop to appreciate the aesthetics and the sounds of words or the meaning behind them. Babble.com is running a competition for wordsmiths and linguists to send in a video of themselves sharing their favourite word in a foreign language.

A book entitled ‘Mr William Shakespeare’s (sic) Comedies, Histories, & Tragedies’ has been unearthed in a library in Saint-Omer, a provincial town in the north of France. Medieval literature expert Rémy Cordonnier stating that he had not initially realised the battered book was such a treasure. Speaking of finding treasures, here’s a list of 45 turns of phrase that Shakespeare introduced to the world through his prose, some of which have made their way into everyday conversations.

A rather unfortunate event happened to Lemony Snicket writer Daniel Handler when he made a very ill-considered racist comment while presenting American writer, Jacqueline Woodson with the prize for young people’s literature for Brown Girl Dreaming at the National Book Awards in the US. The backlash was so great that the author was compelled to donate €110,000 to our friends over at #weneeddiversebooks.

Despite Gabriel Garcia Marquez being banned from entry into the United States until his death at 87, all seems to be forgiven. An archive penned by the Colombian writer will be displayed at the Harry Ransom Centre in the University of Texas. The collection, which was purchased from his family includes material relating to all his most important books, notably, the world famous One Hundred Years of Solitude.

My Film Week In Review | 9 [Ft. Guardians of the Galaxy]