President of Egypt, Abdel Fattah el-Sisi is leading a crackdown on voices of dissent in the public domain. Alaa-Al-Aswany, bestselling author of The Yacoubian Building, has been forced to cancel a public seminar titled ‘Conspiracy Theory: Between Reality and Illusion’.

According to this article, censorship of Aswany began in June 2014 after the author was accused of treason for criticizing Sisi’s presidential campaign. Aswany has continued his public outreach since this event by leading a series of public lectures in Cairo and Alexandria. Former Defence Minister, Sisi has been keeping a watchful eye on press and media since being elected into the presidency in 2014. ‘This year, dozens of journalists and activists have been jailed, from prominent investigative journalists like Hossam Bahgat to young stringers.’

Last month, Aswany gave an interview to French newspaper Humanité saying, ‘While I publish everywhere in the world … I cannot do so in my own country’. Freedom of expression does not exist, the situation is worse than under Mubarak’. 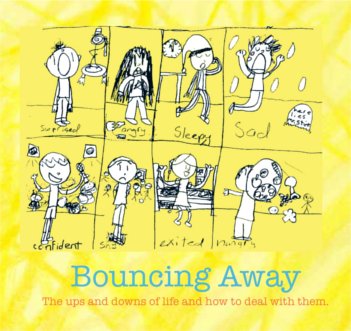 Bouncing Away, is the first Irish mental health book written for children, by children.  The book tells real experiences of children coping with the ups and downs of life. It has been written by twenty-one children – eight from HSE Child and Adolescent Mental Health Service (CAMHS), five from HSE Community Psychology Service (PCCC) and eight from a Sligo primary school. The Kids Own Publishing Partnership took on this project when approached by artist Niamh O’Connor with the concept. They then commissioned artist Vanya Lambrecht Ward and writer Lisa Vandegrift Davala to work with the children in creating this book.

The kids have explored and shared themes such as ‘feelings and emotions’ and ‘what helps you feel safe, happy and secure’.

Ward has explained that she was ‘quite blown away’ by the children’s emotional intelligence. ‘They had a very good grasp of their emotions. They talked about how feelings are not always the one thing, they can be a combination of things…’

Bouncing Away will be distributed nationwide to schools, libraries and HSE mental health services. For more info about the book or to purchase a copy, visit Kids Own Publishing Partnership.

Dark Horse comics has published the first graphic novel by Man Booker winning, Margaret Atwood. Angel Catbird has been produced in partnership with Keep Cats Safe and Save Bird Lives, an initiative led by Nature Canada, the oldest conservation charity in the country. The aptly named comic has been illustrated by artist Johnnie Christmas (Sheltered). It tells the story of an unusual superhero over the course of three all-ages graphic novels.

‘I have concocted a superhero who is part cat, part bird. Due to some spilled genetic Super-Splicer, our hero got tangled up with both a cat and an owl; hence his fur and feathers, and his identity problems’ said Atwood.

School Removes The Adventures of Huckleberry Finn from Curriculum

A school in Philadelphia has removed Mark Twain’s The Adventures of Huckleberry Finn from the school curriculum. Principle of the school, Art Hall, commented on this move saying ‘the book’s use of the n-word’ challenged students who believed the school was not being inclusive. He went on

Friend’s Central School which is  led by a Quaker ethos, has justified its decision saying, ‘the community costs of reading this book in 11th grade outweigh the literary benefits’.

This classic story of Huck Finn, a young boy who escapes his dismal life with an alcoholic father in search of the unknown, has been criticised by the school for using the word ‘nigger’ over 200 times.

Hall has stated that this move was not an act of censorship: ‘I really do believe that this is an opportunity for the school to step forward and listen to the students.’