The Turn of the Screw | Smock Alley Theatre 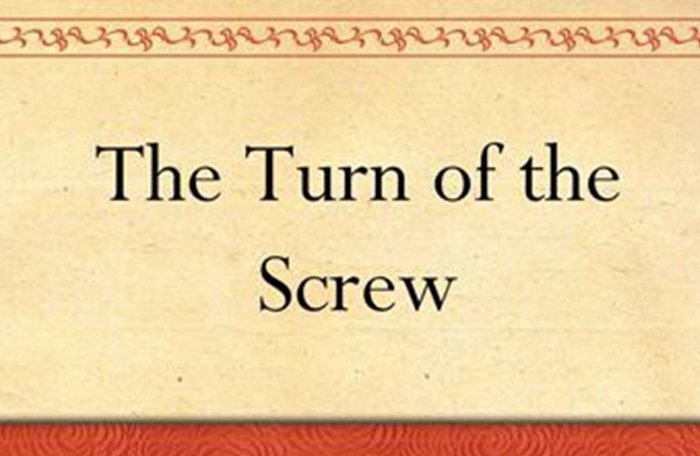 The Turn of the Screw, originally a novella by Henry James, has been interpreted for the stage by Silent Chuckler Promotions and was performed last week in Dublin’s Smock Alley Theatre. The play opens with a meeting between a young governess and a wealthy gentleman in London. If the governess accepts the gentleman’s offer of employment, she will be sent to take care of his orphaned niece and nephew in Bly, a manor buried in the depths of the countryside. The young woman sees this prospect as a romantic one, having come from a dark, lonely past. This is her chance for escape.

On arrival, the governess is in raptures over her new role. She believes she will take charge of the home and become the lady of this austere old mansion. She wishes to convince the children in her charge, Flora and Myles, of her tenacity and confidence, as the two young orphans have been abandoned in a home cast in shadows and riddles.

We learn that the young girl, Flora, has not spoken for some time, and that her brother, ten-year-old Myles, is to be sent home from school for doing dreadful, unspeakable things. This story is a gripping one. It guides the audience through the passing hours and days from the words written in the governess’ diary. We watch, bemused, as things start to unravel. We are given clues to old stories and events from the housekeeper, Mrs. Grose, and we observe our flawed governess as she is confronted with the supernatural in a house with children and tales that play tricks on her fraught mind.

Henry James’ original story has been reimagined in books and adapted for the stage a number of times. This play is set against the backdrop of the Boys School stage at Smock Alley which contributed to the frightening and oppressive quality of the performance. As the actors spoke out to their audience, their faces were cast in shadows. They pulled us in to the mysterious and awful events as they started to unfold.

This play asks us to decipher what is happening before our eyes. We are brought into the house and forced to ask ourselves if the governess is in a war against old ghosts, with which the children may be accomplices, or whether we are witnessing the downward spiralling of a fragile soul pushed to the brink of despair.

I spoke with actor Mark Griffin, who transforms himself from the domineering master into Mrs. Grose the housekeeper, and then becomes young Myles, who drifts around the governess, mocking her, playing with her emotions and senses. Griffin spoke about his experience saying: ‘I love dark theatre, theatre that makes the audience squirm a bit, to think and assess what’s happening on stage and also the story as a whole.’ He explained how he and Irene Kelleher, who plays the part of the governess, set out to challenge their audience. ‘As performers, Irene and I have made the decision to make it as ambiguous as possible – it should encourage debate and discussion regarding the plot as a whole, and no one should leave the play feeling one hundred percent confident in their assessment of ‘what actually transpired.’

The story drew me in. I saw a woman who, through feigning strength, becomes deluded and terrified of her surroundings. We watch as she shouts at her ghosts in the darkness, sitting awake during the night, pushing herself further into a state of mania. It is both distressing and intoxicating to see this woman grow so shrill and deeply distressed.

Kelleher and Griffin hold the small, intimate stage incredibly well. Kelleher captures the governess brilliantly as she transforms from a naïve, lonely creature into a raw and hopeless wretch. The audience walks away with the opportunity to ask themselves questions about the mind and mortality. I look forward to seeing more from Silent Chuckler Productions.

The Showreel | 5 [ Ft. Star Wars: Episode VII – The Force Awakens and much more]

Review| Gays Against the Free State