Efference Copy Mechanism by Ronan McCrea is the latest exhibition on show at the Temple Bar Gallery + Studios, and is comprised of a complex arrangement of superimposed slide and 16 mm film projections, sourced from the artist’s personal archive and accumulated image bank.

The large-scale installation explores the materiality of film, and is fundamentally about how we view images. This is investigated through the use of appropriated and found images, as well as instructional and pedagogical films, which are reproduced and archived in a reimagined context in order to create new images and to destabilise our preconceived expectations of them.

The gallery space is completely blacked out in order to accommodate the installation, and the projectors and other necessary mechanisms sit atop archive storage shelves placed in the centre of the room, subverting their function as a space for storing inanimate information.

From this central system, images act as signals which are sent out and received by the viewer. This process is a key to the exhibition’s title. In neurology, an efference is a motor signal sent outwards from the central nervous system. An efference copy is then created as the signal exits the brain and is rerouted to the sensory cortex, thus explaining our perception of stability despite constant eye movement, and our ability to distinguish external stimuli from signals generated by our own actions.

This neurological system is metaphorically enacted within the artist’s work, confronting us with a perception that is imperceptibly skewed. By raising questions about perception, and how that relates to our sense of stability both internally and externally, McCrea tries to present us with a more objective way of seeing, which is divested of preconceptions and expectations. 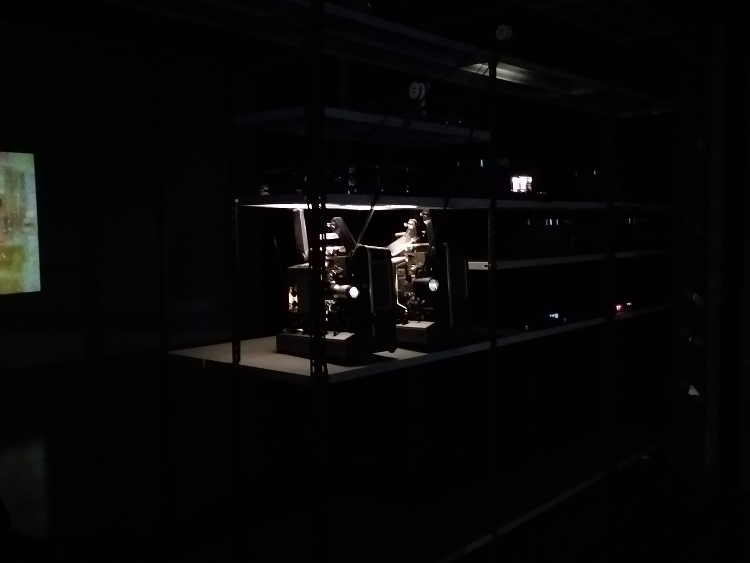 Structures of Feeling (named after a work by Marxist theorist and critic Raymond Williams, which explores a historical understanding of “affective elements of consciousness and relationships”) is a double screening of two 16 mm films: a thirty minute segment of Robert Flaherty’s ethnofiction documentary, Man of Aran, superimposed on a 10 minute segment of a Soviet educational film, The Structure of Atoms. Both films aim to visualise what we don’t usually see—the first, a remote island culture, the second microscopic particles.

The latter is played asynchronously to the former, at 16 frames per second, which creates an unstable and volatile combination of images, a visual structure that is constantly in flux. Different cultural ideas, styles, and narratives are organised into a shared and unified experience. The artist physically restructures what we see to create something that is at first affective and visceral, which destabilises our expectations and preconceptions. 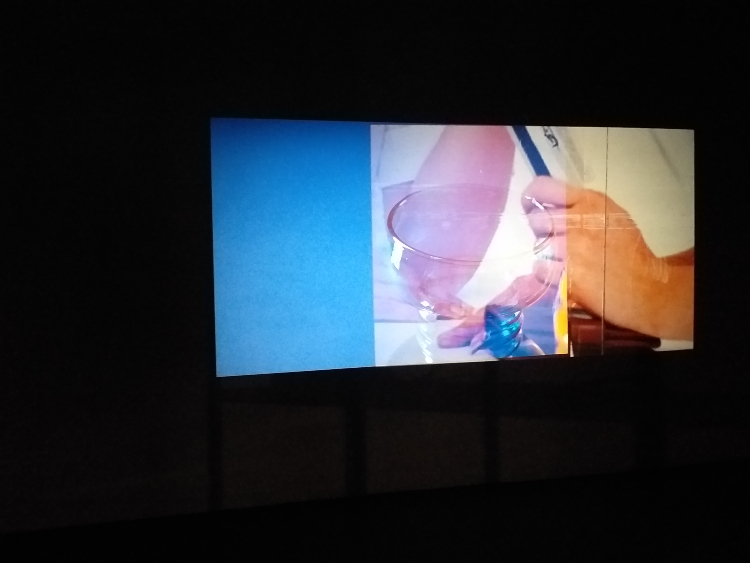 Twelve by Twelve by Two is a projection of 35 mm slides from 12 sets of 24 images. The images are organised into sets based on different typologies, and are sourced from an archive of ready-made images. These images constitute the fragments and unrealised material of previous projects and studies, and include depictions of uninhabited zoos, seascapes, hand gestures, abandoned buildings, instructional pictures, and a plethora of other subjects and ideas.

The slides are programmed to create 12 systematic sequences of superimposed images, lasting approximately two minutes each. In this way, the images are recombined into a newly imagined context. Visual fragments are stitched together to create an image that is stabilised by patterns that are imperceptibly recognised by the viewer, in a way that draws influence from structural films, minimalism, and conceptual art.

[perfectpullquote align=”full” bordertop=”false” cite=”” link=”” color=”#8BD616″ class=”” size=””]Looking for something inspiring to do this month? Check out these Art Events in April, taking place around the country this month[/perfectpullquote]

The last piece in this exhibition is titled North Sea Dissolve, which consists of a 35 mm slide film shot at sea, in which the exposures on the roll are extended from fractions of a second to minutes in a rolling dissolve sequence, ultimately creating a play between proto-cinematic temporality and a captivating optical effect. The title is a partial reference to Marcel Broodthaers’s 1974 film and book, A Voyage on the North Sea, although images of the ocean tie in with themes present in other artworks in the exhibition.

Overall, while exploring the materiality of analogue photography and film, and his own relationship to it within his practice, Ronan McCrea’s introspective installation also challenges the viewer’s expectations of perceiving by destabilising and restructuring what we see and how we see it. He creates a unique environment in which archival material is reorganised into coalescing stimuli in which vying ideas and imagery emerge as a single visual signal.

Efference Copy Mechanism is currently on show at the Temple Bar Gallery + Studios until April 13.

Hayley Carr is an NCAD graduate who likes to write about herself in the third person. She enjoys writing and procrastinating, and one day hopes to be better at the former than the latter.

Is Gaming Therapy A Viable Treatment For Mental Illness?

What’s On | Top Visual Arts Events in May

What’s On | Art Events in April