And other withered stumps of time

Were told upon the walls; staring forms

Leaned out, leaning, hushing the room

Staring forms is a group show at Temple Bar Gallery + Studios, a collaboration between artists Miranda Blennerhassett, Aleana Egan, Andreas Kindler Von Knobloch and Tanad Williams, featuring works made this year. Its title is borrowed from T. S. Eliot’s The Waste Land (1922), one of several literary sources showcased as influences on their deliberations. All are current or former holders of studios at TBG+S.

Appropriately, separate, corresponding paths are like roots in a show replete with overlaps but which never feels reducible to a singular viewpoint on shared concerns. These preoccupations—to do with the reciprocal influences of ideas and fabricated spaces—are laid bare throughout by an examination of 9, industrial materials and allusions. Recurring connections of built and conscious interiors occasion concertina-like passage through sensations of intimacy and publicness. Immediate sensory conditions are politically ambiguous.

Kindler von Knobloch’s Acting Bodies, an intervention in the main gallery space, seems at first unavoidably conspicuous, but intrudes and recedes with subtlety as the exhibition is negotiated. The viewer can intervene directly in the regulation of perspectives, using its dangling, partitioning screens, movable across wooden trusses. The indulgence of vision and control is tempered by awareness that one is acting upon public space. These dark, cyanotype-blue screens have a gentle electricity; the ambience has an optimistic note. 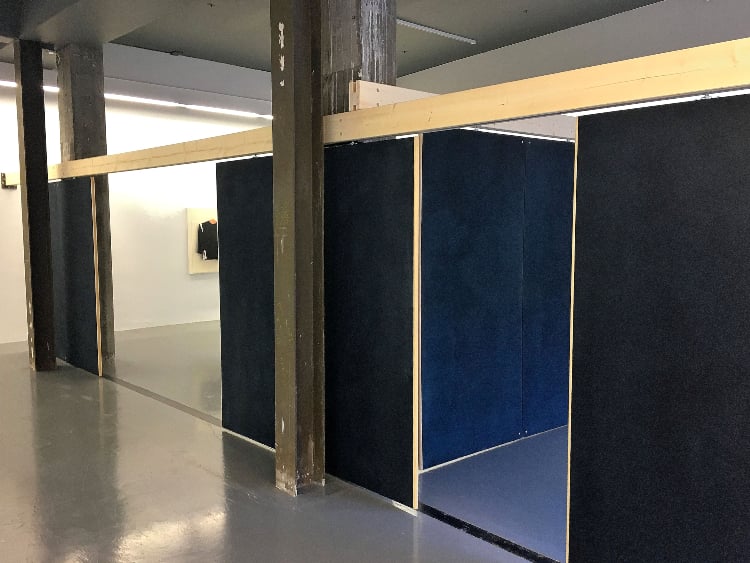 Blennhassett’s abstract mural, Log Cabin, is also soon apparent. Its patterned upholstery strips, arranged in the titular quilting pattern, decorate a berry or Chianti-red ground, straddling floor and wall like a massive geometric tapestry. Its rustic or homely allure is awkward in an institutional, Church-like scale. 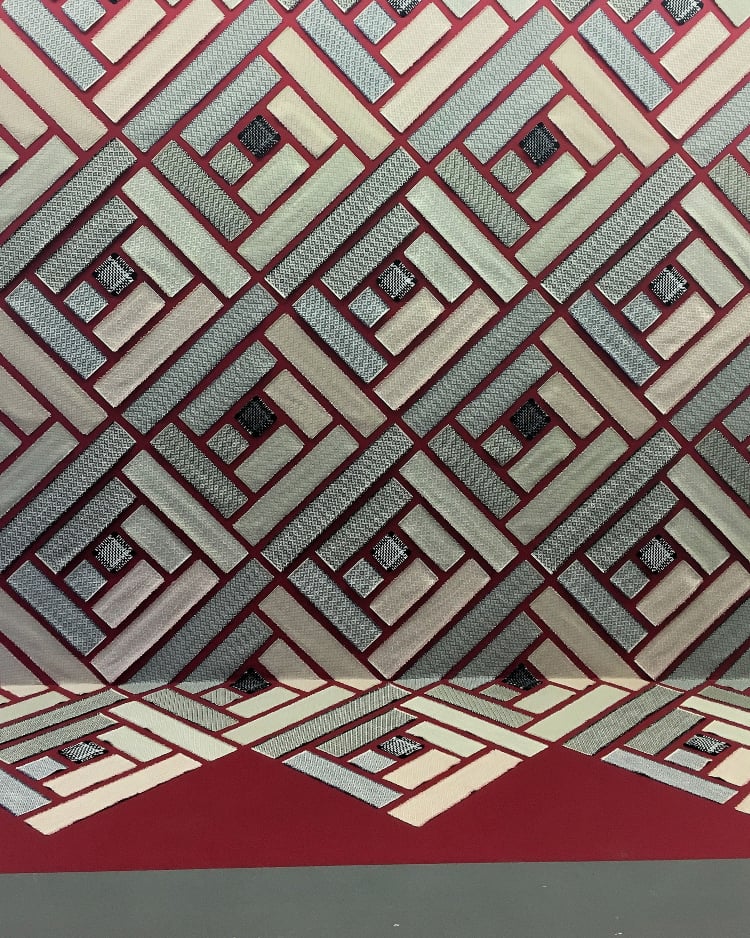 The sculptures of Tanad Williams drift like ice-cream or Tetris blocks on the floor, pale building materials. Their clearest reference is to scale models, e.g. condominium balconies surreally conjoined at right angles, but some of their components, such as skirting boards, refer to the scale of the viewer.

Titled Looker and Onlooker, they offer related perspectives. Their miniature architectural aspects, conveying drab economic anxiety, are subverted at the viewer’s scale, where they serve up aesthetic abandon. His wall-mounted works are of “unspecified materials.” Tablets of hardened liquid darkly enclosing some crumpled material, they are like aquariums, twin dusty landscapes, green and foreboding. 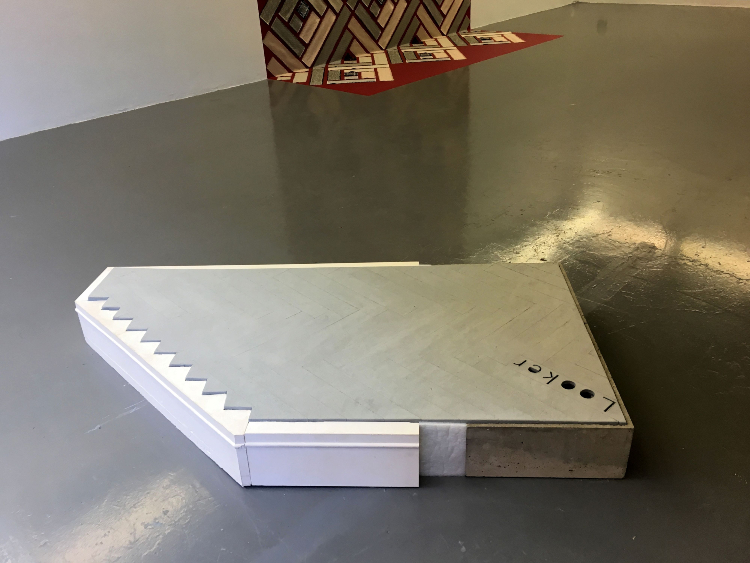 Like Williams’s sculptures, Egan’s sifting screens, also shin-height, is forlorn. Beige cushions, a stepped plinth supporting a folded shirt or pyjama top—its stripes of lilac, gold and emerald vague under a mesh—make explicit the connection of sleep and death. From this point of intensity Egan’s work seems to expand the show’s contours in looser relationships.

Free ideas about the sea asks how have we been affected by ideas of the sea as a spatial quantity, and how have perceptions changed. Disgorged in its wall-mounted vitrine is a vintage-looking, beaded jacket; a deep-blue droopy hoop with sagging cross bar (a recurring form in Egan’s oeuvre) and two brittle-looking sea shells or ping pong paddles, encrusted white and brown. 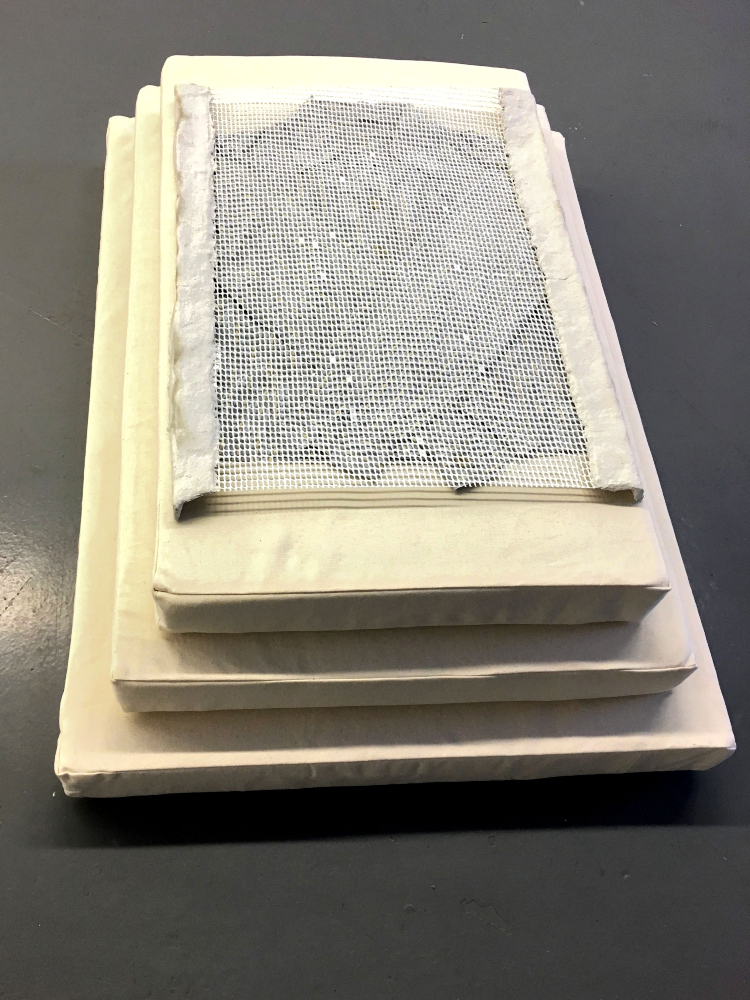 The last work is sound carvings (scrappy observations), Egan’s visual and sound installation. Intimate, domestic details—a pocket-like improvisation of silk scraps; a shoe—are situated in unfathomably dispersed societal and economic contexts. These sounds, apparently recorded at home, are inconstant; muffled, abrasive and screechy like a chair on a floor. There is birdsong and the voice of a toddler.

From this atrium space, we look back through a little angular window, low-set, at the main gallery and its glass façade and beyond, to the milling crowds outside. Here, the entire series of alien, specific spaces feels vicariously tangible, like beads strung together.

Danny Kelly is an artist, based in Dublin, working in the general area of contemporary painting. He is a visual culture graduate from NCAD. He enjoys responding to the work of others and is learning more about electronic music.