15 Horror Films to Watch this Halloween | 3

Part three in our list of alternative horror films to watch this Halloween. Here’s part one and part two. 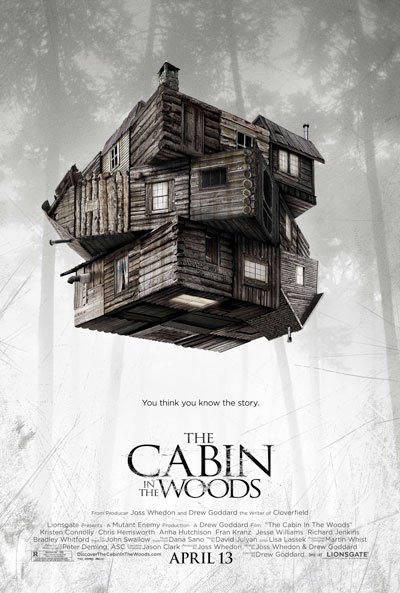 Drew Goddard’s directorial debut is now a Halloween must for me, Cabin in the Woods simply turns the horror genre on it’s head. Big words, I know.

Five college friends head off into the woods, to a creepy cabin, for the weekend (all seems run of the mill here). They come across some eerie remnants from the long-dead previous owners (Ah yeah, saw that coming). Those long-dead previous owners may not be so dead as previously thought (yeah, yeah). But just when it was looking like your sterotypical horror flick, it turns out Goddard (Cloverfield, World War Z) and Whedon (The Avengers, TV’s Buffy the Vampire Slayer) had something new up their proverbial sleeves.

With all your Halloween needs of jumps, gore, suspense, foggy forests and the like, Cabin in the Woods supplies laughs on top of a superior horror movie. To all of you who love your horror, this is a celebrated nod to those greats of the past while still being a creative deconstruction of those same films. Not unlike the already discussed Behind the Mask, this film is for both those who love horror and those who kind of hate what it has become. 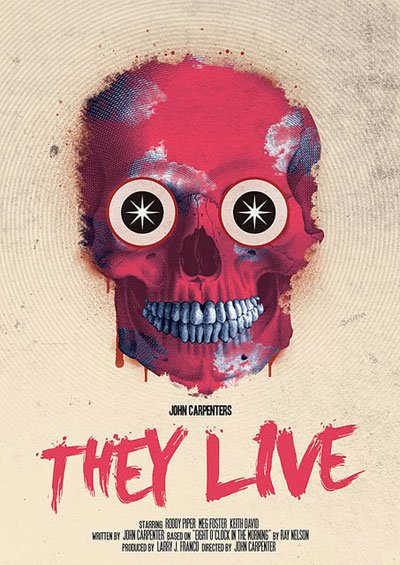 They Live stars Roddy Piper, as in the wrestler “Rowdy” Roddy Piper. That alone should merit a watch. At one point Piper’s character says the line “I came here to chew bubble-gum and to kick ass… and I’m all out of bubble-gum”. This too should merit the 90 minutes spent watching this movie.

A thoroughly enjoyable watch, Nada (Piper) discovers a pair of sunglasses which reveals the true world we live in. Advertisements and magazines are all subliminal messages to keep the human race subdued. What’s even more shocking is who is behind these messages and where they come from. Piper must do what any righteous hero would, chew bubble-gum and kick ass. 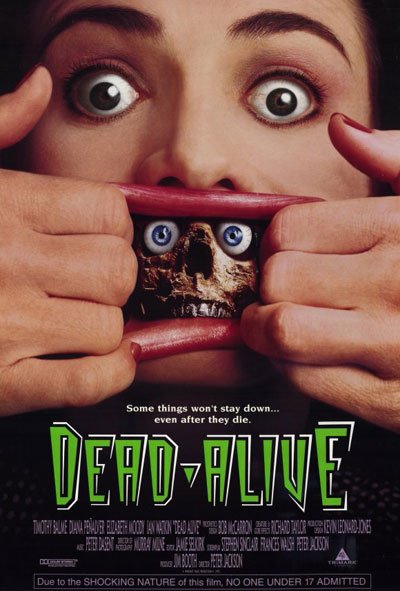 The man who has brought us The Lord of the Rings and The Hobbit trilogies and the fantastic remake of King Kong started off making little-known depraved gore-fests.

Bad Taste (1987) and Meet the Feebles (1989) are his first two feature length movies. The level of non CGI special effects are fairly high and I love the make up in all three (including Braindead). All three are pretty disgusting. All three are cult classics.

Dead Alive (originally released as Braindead) is the story of Lionel. Living with his horrid mother, life only gets worse when she dies and then becomes un-dead. A slew of gory deaths later, Lionel now has a basement of zombies with only one thing on their minds; dinner. “They’re not dead, exactly. They’re just rotting”.

Dead Alive falls in between the so-bad-it’s-good and actually-good categories. It is a fun watch with some great lines and super puppetry/special effects. Not for the squeamish but perfect if you want to laugh your way through a bloodbath. 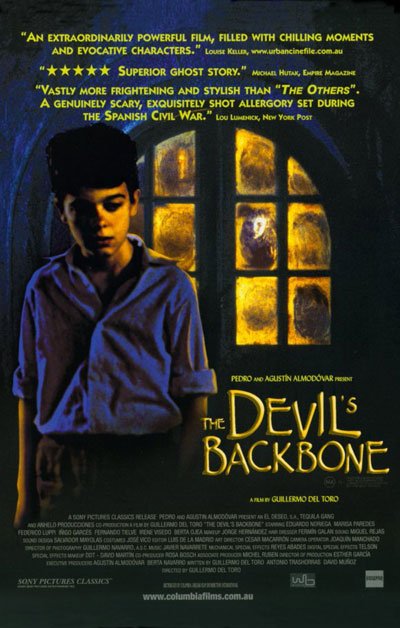 What is a ghost? A tragedy condemned to repeat itself time and again? An instant of pain, perhaps. Something dead which still seems to be alive. An emotion suspended in time. Like a blurred photograph. Like an insect trapped in amber.

Before del Toro brought us Pan’s Labyrinth (2006) he made two fantastic horror stories come to life, Cronos (1993) and The Devil’s Backbone (2001). Cronos is a take on a vampire story which beautifully delivers the horror that goes with an eternal life and one’s quest for it. The Devil’s Backbone, which I have chosen here, is his take on a ghost story. As always, del Toro incorporates real life angst and tragedy into his films (Pacific Rim aside) and we are sent back to the Spanish Civil War to witness a coming of age story.

Carlos, the protagonist, is brought to spend his formative years in an orphanage after his father is killed in battle. It is not long before he finds some things are amiss in the secluded orphanage and we follow Carlos through his expedition of truth. A beautifully shot film, del Toro’s views of good and evil, innocence and war make this a must see. 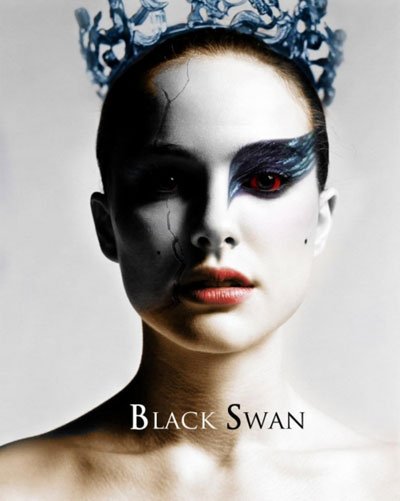 “I had the craziest dream last night, about a girl who was turned into a swan, but her prince falls for the wrong girl and she killed herself”

Darren Aronofsky has made some of the most intriguing movies of the last twenty years. Pi (1998) is a whirlwind tale of a mathematician’s life thrown into chaos while in the search for the universal pattern to life itself. Requiem for a Dream (2000) is one of those notoriously hard-to-watch masterpieces that deserves its place on a list like this, trudging through the lives of addicts in a meld of intense cinematography. Black Swan takes Aronofsky’s vision of a ballet staple (from the 1800s) and transforms it into a modern tale of paranoia and suspense.

Natalie Portman (V for Vendetta, Thor) stars as the hard-working dancer who recieves the role of princess Odette, the White Swan, in the telling of Swan Lake but as a new dancer, Mila Kunis (Extract, TV’s That 70’s Show), joins the company her jealousy and paranoia may grow too much for her.

A beautiful film, Aronofsky provides an edge-of-the-seat psychological thriller drapped in the prestige of the Bolshoi Ballet. One to watch for those who like to keep themselves guessing throughout the film and with its master-class in horror standard mirror-shots, Black Swan possesses my Halloween seal of approval.

The Hellfire Clubs – decadence, with a whiff of brimstone