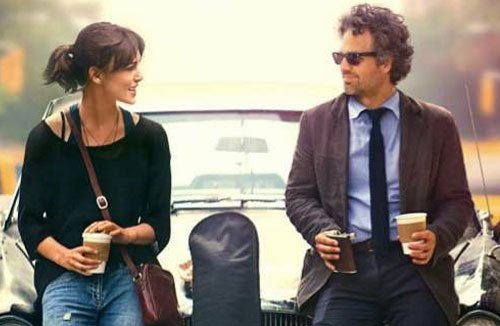 Begin Again stars Keira Knightly and Mark Ruffalo and contrary to what we might immediately presume when we hear that Keira Knightly is starring in a movie, it is not a period drama. Not a swashbuckler or a pirate in sight.

‘Can a Song Save Your Life?’ the original title when it premiered at the 2013 Toronto International Film Festival, tells the story of two people in a city who meet when they are both down on their luck. This chance meeting is enough to inspire them both and they decide to make music together. How original.

Greta, (played by Knightly) is pissed off, she has moved to New York with her long time boyfriend and music partner, Dave Kohl or Adam Levine. Dave has just signed a record deal and in the excitement of it all, he grows a hipster beard and runs off to L.A where he shifts someone else and then writes a song about it. This obviously sucks for Greta, because she was living in his amazing New York pad with him, so she is doubly pissed off that she has to move out and into an apartment with her British friend (James Cordon) who brings her out to an open mic for the craic and forces her up on stage where she sings a little song about a subway, or love, or whatever.

Up until this point, Ruffalo has had a pretty dreadful day; a formerly acclaimed record producer he is now a middle aged, alcoholic. He shows up drunk for a business meeting, with his estranged, American Apparel clad daughter in tow. He probably wasn’t expected to attend the meeting in the first place but he embarrasses himself, his partner and everyone else in the office when he is told he no longer works there and that he should leave.

He tries to do a bit of a Jerry McGuire and runs up to some of the appalled staff, dramatically appealing to them to come with him which is a pretty good gag, in fairness.

Anyway, Ruffalo is really annoyed because his daughter hates him and his ex wife thinks he’s a loser and so he stumbles into this bar where he hears Greta’s melodious voice and in his drunken stupor he decides that he wants to change both of their lives. He tells her he finds her enchanting and beautiful and also that he is an absolute failure, alcoholic with no prospects and asks her to record an album with him. And she says yes. 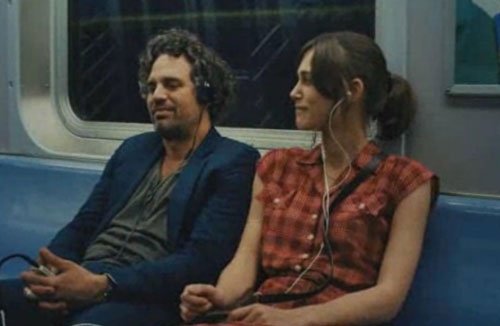 Here is the super edgy twist- it’s going to be recorded outdoors, so that the sounds of the city will echo all around them. How realistic. I mean, really, how on earth does one record an album in a subway station. You can’t. You don’t. They have a bloody cellist with them, for god’s sake.

Unfortunately, they have no money. But oh, hang on; Dan suddenly remembers that he is best friends with Ceelo Green. They pay a visit to Ceelo’s giant mansion and take a little dip in his pool and they have some lols and then Ceelo decides that the project is definitely, 100% worth investing in. What a solid investment.

I wish I wasn’t so cynical but I felt bored by the whole thing. They kept blabbing on about true inspiration, how their music was so ‘authentic’ and how they had ‘integrity’. Portraying life as a constant, artistic experience complete with closed eyes singing and dramatic air grabs. In reality, I felt it severely lacked any of these convictions.

I think the fact that I find Mark Ruffalo and Keira Knightly pretty annoying people might have also been my problem. I also seem to be one of the few who didn’t like it; most other people found the whole thing perfectly charming and sentimental, but all I kept thinking was that every song sounded the same, manufactured and processed, despite the film contesting this. Even though the whole thing was about ‘finding inspiration in the city’ I just felt there was no inspiration or soul behind it. I didn’t really believe in it.

We Are Made of Stars