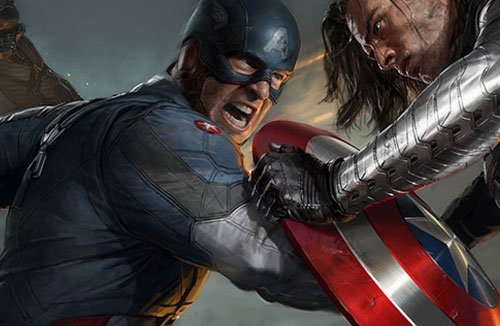 As some of you readers may have noticed from my preview to Captain America: The Winter Soldier, I was fairly excited to see how the story would play out and how this would add to the fantastic Marvel Cinematic Universe. From the beginning, to the long wait for the nerd-satisfaction of those post-credits extras (that Marvel love to hang over us); I was captivated by yet another thoroughly enjoyable experience under the watchful eye of Kevin Feige (producer of 2008’s Iron Man and everything since).

Captain America: The Winter Soldier feels, to me, as if a high-action superhero movie and a political thriller have been forged as one and knitted together with some witty interludes. And it really works.

The backdrop of some shady goings-on in the S.H.I.E.L.D. operations is present from the start of the movie. Couple this with an underground coup of sorts headed up by the titular force of the Winter Soldier and the powers that strive for all that is right are in for some serious trouble.

New to the Marvel Cinematic Universe, directors Anthony and Joe Russo made sure the scenes in this film, that could feel real, felt real. Chase scenes and intense fire-fights are common place for chunks of the high action sequences and the direction brings us slap bang in the middle of the bedlam. A lighter approach to the use of CGI really paid off in this movie. Anthony Mackie, who plays Falcon, said during post-production, “If they can build it, they built it. If we could do it, we did it. They wanted to do as little CGI as possible. That’s why the movie looks so great” – and it does. High action films that don’t use CGI seem to be a dying breed and I for one am happy to see directors with the balls to try and really do something.

Writers Christopher Markus and Stephen McFeely tackle both the serious and hilarious brilliantly. They have a knack for knowing when to add the witty ice-breaker or awkward moment to lighten the mood when necessary. They also deal with the more serious moments with conviction and their work since the first solo Cap movie has paid off. They improved the Thor movies with The Dark World and they have bettered themselves for their return to the Captain America series.

The supporting cast each held their own. Scarlett Johanson’s Black Widow shows more emotion (yes, she has emotions) than before and looks amazing, as always, leather-clad, doing the splits (yes, she does). The inclusion of Mackie’s Falcon brings a new, fresh character to the world of The Avengers. We don’t get to really delve into his character (lost a buddy in battle and now seems to be just along for the ride) however once he gets started, as Falcon, his scenes are exciting. Nick Fury gets himself into some troublesome situations (as we could see from the trailer) and Samuel L. Jackson gives a strong performance and, of course, is as cool as ever. Frank Grillo (Brock Rumlow) and Emily VanCamp (Agent 13) set up their futures as Marvel contributors and I am looking forward to how their characters progress in the movies to come.

Sebastian Stan, although playing the titular bad-guy, does not get a huge amount of screen time. He is not spoken of until making a big entrance and even then he doesn’t feature heavily for the first half of the movie. All of his scenes are big and explosive (literally) and he delivers as a mighty adversary for Rogers. The calibre of Robert Redford is well known and his portrayal of Alexander Pierce lived up to my expectations. He plays a stern head honcho in S.H.I.E.L.D with something up his sleeve. What that something is ties the movies together nicely and brings the story from The First Avenger‘s World War woes to the new age ‘Big Brother’ agenda.

Chris Evans’ performance as Captain America, once again, feels spot on. His moral compass is fixed in the ‘right’ direction and his disdain for corruption, evil and all things secretive gives us the familiar sense that no matter what happens he will always do the unselfish act; if it is for the better of humanity (or even just a mate). Rick Remender, who took the new comic series of Captain America over in 2012 describes Steve Rodgers as “a patriotic soldier, directed by a personal ethical compass, belief in the American dream and faith in his fellow man… He can punch bad people and jump through glass. He’s the person you wish you were”. This faith that Cap possess is something that is evident throughout this movie, he battles evil forces everyday, yet he truly believes that good will overcome in the end. He is the personification of optimism. Author and columnist John Gray, in a recent article for the New Statesman, talks of why so many people across the world can get on board with the old-world hero; he states “the reason for his popularity isn’t that many people still believe in his black-and-white moral world. It’s that so many no longer can”. We need a hero like Captain America in today’s world.

That may be looking at it all a bit deep – this is a through and through treat of action cinema after all. From the initial scenes on the tanker, where UFC star Georges St-Pierre (portraying Batroc the Leaper) and Chris Evans go toe to toe, to the Humvee flipping explosions this film has action from every angle. You will see some familiar faces you did not expect and some new ones will transpire as the film progresses.

I truly enjoyed this contribution of the ever-expanding Marvel Cinematic Universe and it jumps straight in to the top bunch of what they have released to date.

In short: Go see it.