My Day with Gerry Anderson. 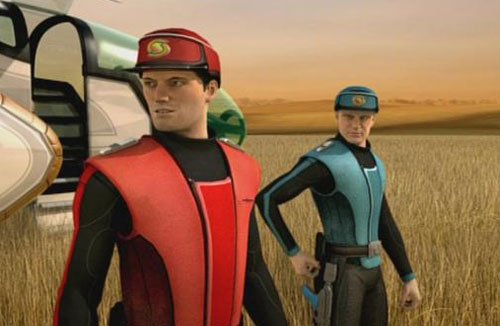 Back in 2004, my brother and I were invited to an exclusive behind-the-scenes tour of Gerry Anderson’s studios in Pinewood, during the production of ‘Gerry Anderson’s New Captain Scarlet‘. Our route to Pinewood would take us on the M40, which has a place in Thunderbirds history, as the section near High Wycombe featured in the infamous Tiger Moth emergency landing sequence from the movie Thunderbird 6. On arriving at the security gate we were naturally asked as to the nature of our visit, where we told Security, “We’re here for a tour of the new Gerry Anderson production”, as you do.  Anyway, we were let through to make our way to the main Pinewood offices and then up the staircase, to look for Gerry’s office.  When we found the correct door with the nameplate which bore the inscription, ‘Mr. Gerry Anderson:  Anderson Productions/Indestructible Production Company’.

We both stood there slightly nervous saying, “Behind this door is Gerry Anderson!  Who’s going to knock the door?”

Gerry opened the door, welcomed us both in, but after I continually called him “Mr. Anderson”, he asked that I just call him Gerry (I remember feeling a bit like Agent Smith from The Matrix).  We were fully expecting Gerry to then hand us over to a member of the production staff as we were sure he’d be far too busy, but he then said that he would take us to his studios in the Stanley Kubrick building – we didn’t even have to sign a non-disclosure agreement (surprising, considering some of the details and anecdotes he imparted).

In his very agreeable Mercedes E-Class, he then drove us (no Parker jokes, please!) to his studios, where he experienced a little trouble with the electronic card entry (which would have been a little embarrassing). Once inside we made our way to the screening room to watch part one of the opener, Instrument of Destruction, in 1080p full HD (remember, this was 2004 – years before HD became commonplace), there was also a standard definition CRT TV in the room – the difference in quality was staggering.  Even more staggering, however, was the actual episode itself, especially when it was proudly displayed that NCS was now presented in ‘Hypermarionation’, at this time my face was a cross between beaming with my lips smiling broadly ear-to-ear and my jaw dropping to the floor, in true Stanley Ipkiss style.  After this Gerry wanted to know what we thought, naturally I just came out with a stream of superlatives as I’d just seen the ‘next big thing’.

“Well, you’ve got part two to look forward to later,” he replied.

Now it was time for us to make our way into the place where the magic took place: the animators’ studios.  We were shown around a room which upon on first inspection looked like any other office; with people sitting in front of computers, busily clicking and tapping away, but a closer look revealed that these weren’t your common or garden office workers, no, these were artists at work.  Going around the various teams, responsible for different aspects of the production (modelling landscapes, vehicles, character movement, quantising the MoCap data, etc.) and being something of a ‘techie’ myself, I would ask various animators about what he/she was working on (like inquiring if voxel graphics were employed in creating the Martian landscapes, which it turns out they were).  After going around the various departments it was time for me to get terribly excited, as we were about to enter the nerve centre of the operation: the climate-controlled ‘render farm’, which at the time was one of the most powerful in Europe.

Being a self-confessed computer geek, I had to ask what CPU was used in the blades (Intel Itanium 2 running at 1.6 GHz), how many blades there were and how many operations per second could it compute – I have to say it was a little bit like being inside good old SID from Gerry’s UFO.

Time for even more excitement as we were told we were going to meet the great Ron Thornton (two of my all-time heroes in one day – WOW!). In case anyone needs reminding, Ron cut his teeth as a model-maker on Blake’s 7, before moving to the US, where he co-founded the Emmy award-winning Foundation Imaging, probably best known their pioneering CGI work on seasons 1-3 of Babylon 5 (then Star Trek spin-offs DS9, Voyager and finally, Enterprise).  It was great to chat about him about his work on B5, where they used the combination of the Amiga 2000 with NewTek’s Video Toaster and LightWave (the latter of which he was still using, albeit running on his Power Mac G5).

After what might have been too much excitement for me, it was now time for lunch, which Gerry very generously said that he was going to treat us to at the Pinewood Restaurant – just imagine all the big names from in front of and behind the camera who have dined there!

During lunch we chatted about a great many things (far too much to mention here & some of a slightly sensitive nature inc. his thoughts on Jonathan Frakes’ live-action Thunderbirds movie, with Gerry being offered a significant sum of cash just to give his approval, which he declined): Stanley Kubrick (he was once contacted about doing effects for Mr. Kubrick, but the deal fell through, so he sadly never worked with or even met him and his sadness over much of Ed Bishop’s part in 2001 being left on the cutting room floor – he still held Mr. Bishop in very high regard, as do all us fans of his work); Doppelgänger AKA Journey to the Far Side of the Sun (as we noticed a poster of it in one of the buildings earlier – he was still largely proud of that film & sad that it never became the hit that it deserved to be).  I still have my two complimentary chocolates to remember that lunch.

After a short break (when we had a look around Pinewood and saw the 007 stage, before it sadly burned down, as well as Goldfinger Avenue and other Bond-related places) it was time for the final phase of the tour to visit the art departments with the many concept drawings and then the writers’ room where I asked one of the writers, Phil Ford, about whether there will be some sort of explanation as to why Capt. Scarlet is indestructible; would there be an exploration of his Mysteron biology?  The reply was, “Well, funny you should say that as we’re looking into that right now.”

There wasn’t time to visit the MoCap studio, but not to worry as part two of the NCS opener was to be the climax of the day, which – like part one – did not disappoint.  After the screen dimmed and the lights came on again we told him how much we enjoyed that incredible once-in-a-lifetime experience, wished him all the very best for the TV première which was scheduled for a year or so as well as for the show as a whole.  As we walked back to his car I mentioned that Mercedes would soon launch the McLaren SLR ‘hypercar’, which would feature gull-wing doors like the ones in UFO. Picking up on this he cracked a joke whilst driving back to his office:

“What’s the difference between a hedgehog and a BMW? … On the hedgehog, the pricks are on the outside!”

Finally, in his office I had to, er, use the facilities, where I noticed a poster for a ’50s B-movie (forgotten which one sorry – I think he said that he worked on the effects), then before we said our goodbyes, he presented us with a book each (the rare FAB Facts).  Then it was back to the real world for us, but what a day.

Before I end I feel obliged to let my personal feelings about ITV known:  yes, Carlton did a good job with the original Thunderbirds DVD release; but 6 months after our visit NCS was going to receive it’s première as part of CITV’s ‘Ministry of Mayhem‘, poor Gerry’s feelings about its treatment are widely documented, but I really felt sorry for him & everyone involved.  I know it was given a ‘proper’ run as a repeat later, but the damage had already been done.  It should have been one of the biggest successes not just in UK Children’s TV history, but in UK TV history, considering the time, effort and money poured into the project, but thanks to poor scheduling and dodgy editing, ITV ruined its chances.  Poor Gerry; he was justifiably proud of the show – sadly, in the entertainment industry you’re only as good as your last production, so I’m sure its poor performance harmed his hopes of producing a CGI Thunderbirds (even though it was pretty much confirmed on the ‘One Show‘, for the launch of Royal Mail’s ‘Genius of Gerry Anderson‘ stamps), which never materialised due to ITV not reaching an agreement with him and finally failing to get funding for ‘The Christmas Miracle‘, ITV really should hang their collective heads in shame.  But that day of the tour really was one of the most incredible days I’ve ever had and I still have to think, “Wow!  That actually happened!”