We also have tickets to be won to ALL the screenings so click here to be in with a chance. 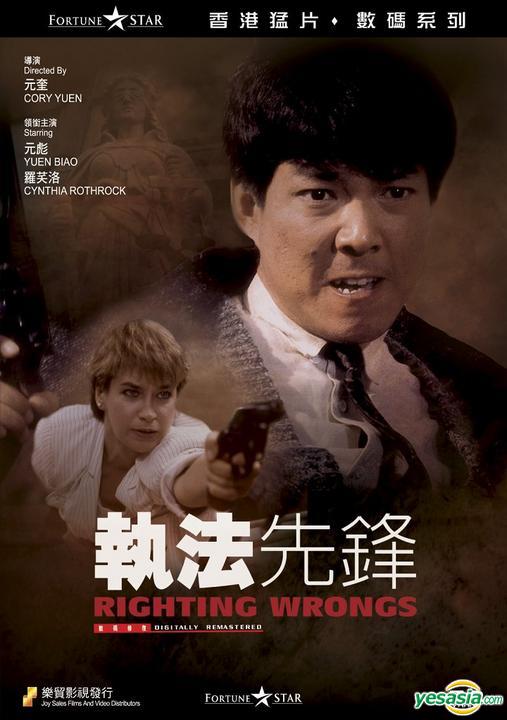 It’s 1986 and Hong Kong is a city on fire. Entire families are murdered in their homes, high-ranking police officials are in bed with the Triads and prosecutors are forced to take the law into their own hands in Corey Yuen’s hard-edged crime feature Righting Wrongs.

Righting Wrongs was released in November 1986 to a post-A Better Tomorrow marketplace. A Better Tomorrow, John Woo’s breakout hit, saw release in April of 1986 and many studios fast-tracked productions to capitalize on the success of this landmark “heroic bloodshed” picture. Other films had their premises altered to cash-in on the strong box office performance of gangster films in the wake of ABT’s release.

Righting Wrongs owes a lot to Woo’s genre defining film with its dueling protagonists, a police officer played by Cynthia Rothrock and Yuen Biao’s avenging prosecutor Jason Chen; its melodramatic tone and a high-level of stylized violence all echoing Woo’s blockbuster. The film has no problem in dispatching characters in increasingly gruesome death sequences; Righting Wrongs is often shocking but with good reason. The violence in the film is reflexive of real-world turmoil in Hong Kong’s film indsutry at the time as crime syndicates began to encroach more and more on the business of filmmaking. This serious tone and message is sold by some of the best choreography and stunts of the period.

Star Yuen Biao came up through the Peking Opera School along with “brothers” and frequent collaborators Jackie Chan and Sammo Hung. Biao was one of school’s “Seven Little Fortunes” and enjoyed success throughout the 1970s and ’80s in such films as Prodigal Son, Project-A, Wheels on Meals and more.

Righting Wrongs is one of Biao’s more successful solo ventures. Though his friends are never too far from his productions. Co-star Cynthia Rothrock was supposed to star alongside Jackie Chan in Armour of God but appeared in Righting Wrongs instead after Chan suffered an injury which postponed shooting. Sammo Hung also makes his mark on Righting Wrongs guest-directing the fight scene in an airplane hanger between Biao and the evil police chief.

This is not to suggest that Biao doesn’t carry the film on his own merits. His strength is in his acrobatic ability which is put to good use in this picture with some fantastic leaps of faith and fast foot work throughout. Look out for a great fight scene against a would-be assassin played by Peter Cunningham or the fantastic “fight” against three cars in a parking garage. Rothrock is also fantastic in Righting Wrongs, a formidable and talented martial artist in her own right she gives as good as she gets against all manner of Triad toughs.

The film’s director, Corey Yuen, continues to work as a stunt coordinator and action choreographer to this day. He recently worked on Wild Card with Jason Statham. He is also the director of American martial arts cult classic No Retreat, No Surrender which was released a few months before Righting Wrongs in May 1986.

For more details and a full schedule check out the Hong Kong Kicks webpage and don’t forget to enter our competition.

Exhibitions: The Library Project Anniversary and Openings in Late-September 2015