As a die hard fan of Friday Night Lights, I was eager to watch Connie Britton take the lead in the Netflix original true crime series: Dirty John. Anyone who’s a fan of the high school drama will remember Britton as “Tammie”, the school guidance counsellor and wife of Coach Taylor (Kyle Chandler). Tammie is a role model. Despite her husband’s glorious career, she doesn’t let her own aspirations get side-lined. She’s tenacious and independent, which is why it’s so jarring to see Britton play the fragile Debra Newell. While she’s still got that effortless style and elegance—the confidence is gone.

In Dirty John, we’re presented with an anxious, doe eyed, whimsical interior designer. Newell is a pushover to the demands of her precious daughters, Veronica (Juno Temple) and Terra (Julia Garner). Between being at their beck and call and running a successful business it’s easy to see how love was on the back burner for a while. Despite having four divorces behind her she’s still not ready to give up. Enter John Meehan (Eric Bana) or as you may know him “Dirty John”.

Dirty John is based on the true crime podcast of the same name created by LA Times journalist Christopher Goffard. It tells the true story of the relationship between Newell and sociopath, John Meehan. For years, Meehan had made a living by deceiving and manipulating women in a bid to acquire their assets. Meehan used online dating sites to find his targets. Newell, a wealthy and successful career woman was his latest victim.

The pair met online where everything happened fast. They got married within two months of meeting. Debbie couldn’t believe her luck. She’d finally found a man who as her character put in the series, “does things without having to be asked.” He treats her like a queen. He brings her a smoothie in bed and prepares a hot shower every morning. There’s one problem though. Her family hate him. Newell’s youngest daughter Terra is quiet and tries her best to see the kindness in everyone. But Veronica is more assertive and knows something’s amiss. She’s not going to stop until she finds out what.

Meehan is played excellently by Bana whose black eyes sear into one’s soul. He is unfeeling, creepy but on initial impression, quite charming. In the first few episodes the viewer starts to question: is this a misunderstood nice guy? Like observations made about Netflix’s You, we not only hold out hope for the villain but we also sympathise with him.

Flashbacks from John’s childhood show that his younger years were miserable. His father was a con artist who used his children for income. Disturbing moments include a scene where he forces John to place a piece of glass inside of his taco meal and eat it. This no doubt results in a hefty settlement. John hasn’t had it easy and we soon learn that like his father, he believes he’s entitled to everyone else’s money.

Things are pretty weird from the start. Much to Veronica’s disgust, Meehan shows up to her mother’s house in shorts and a t-shirt. Not appropriate attire for a fancy dinner. He makes up for it on the date though where he is a complete gentleman. He walks her back to her house where things bit pretty steamy.

It all comes to a halt though when he flings himself down on Debra’s bed raving over the quality of her mattress. She gets uncomfortable and he gets offended and storms out. She decides to give him a second chance despite her family’s concerns. They go through relationship milestones at a frightening speed. Veronica, suspicious of her mother’s new beau decides to hire a PI to look into him. John claims to be an anaesthesiologist and often shows up to dinners and parties in scrubs.

But is this a front? It all seems too good to be true. And it is. It’s revealed he has countless restraining orders and drug charges. Newell while first distraught is quick to welcome him back into her forgiving arms. This is no surprise. Her own mother’s Christian values allowed her to forgive her son-in-law for shooting Debra’s sister dead. Debra’s forgiving nature was inherited. This creates a divide between herself and her daughters. It seems as if it’s an either-or choice between her family and John. 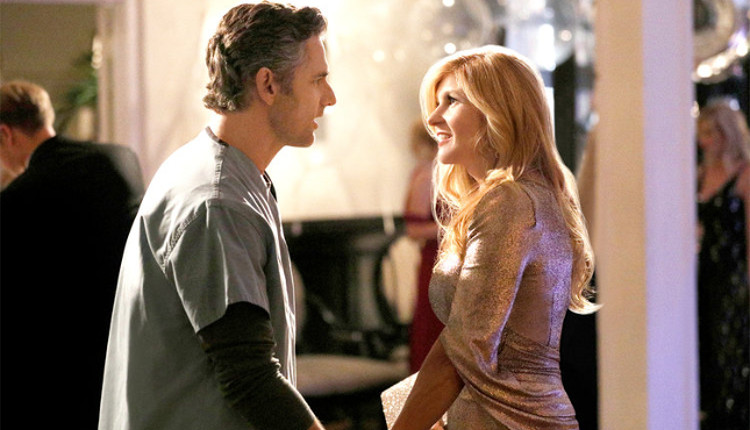 The character of Debra Newell is frustrating to watch on screen. Her defence of her husband is frail and vacuous. Likewise her fights with John are one sided. It’s as though she’s lost any and all identity with this man in her life. His ability to control her without realisation is astounding. That is not to say that she is without suspicion and clueless; she knows that what John is doing and what he has done is wrong.

The evidence is brought to her attention but she still loves him. She sees this evidence as issues they can work through together. The dynamic brings to mind the relationship between Celeste (Nicole Kidman) and Perry (Alexander Skarsgard) in HBO’s Big Little Lies. Anyone who knew Celeste could tell her that she was being abused by her husband. But she continued to view the abuse as a roadblock—one of many that couples must face in their relationship.

A heart breaking moment in Dirty John occurs when Debra learns that it generally takes women several attempts to leave an abusive relationship. Let alone to recognise that the relationship is abusive. It’s important that popular TV series continue to highlight this issue. Not all relationship abuse is physical, it can be emotional too.

As a crime series in general the show is a little dull in comparison with the podcast. It’s not a thrilling story on screen. The red flags are laid out in plain sight for all to see. You don’t have to dig for a twist. The two leads, Bana and Britton however, are very well cast. You don’t expect someone like Britton to play a weak character just as you don’t expect a successful and intelligent woman to be conned by a predator. Additionally, Bana’s ability to switch from suave to psychopathic is unnerving, making him an excellent choice for the role.

A disappointment of the series was the typecasting of Julia Garner’s character Terra as a dumb blonde. Given Garner’s range a lot more could have be done with the character. In comparison, Veronica’s sass and drive to end John were a stimulant that kept the series going. Overall, Dirty John is a well-acted and important story. It raises issues of domestic abuse and strays from the stereotypical representation of a clueless victim. Unfortunately, its story is quite obvious in its construction which stops it from being a binge-worthy series.

Scout Mitchell is an M Phil Film Studies student and a Multimedia graduate. She appreciates a good aesthetic and would describe herself as a major cat enthusiast. Tweets at: @scout_mitchell

Film Review | Rom-Com Someone Great is More Fun Than Great