Comedy snobs tend to see a show get popular and write it off, then sneer at people who love that show, saying it’s not proper comedy. Take Mrs Browns Boys as an example, a show that is basic in its comedy yet everyone seems to love it. So there must be something there, I don’t see it, but there must be something. 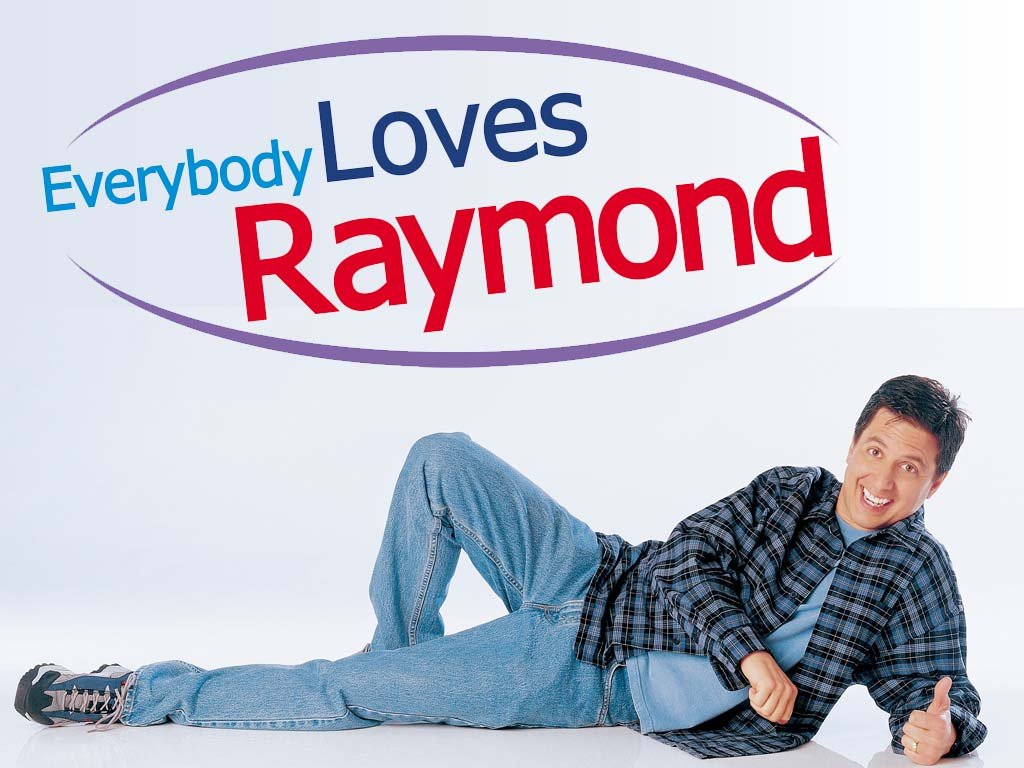 Writing a show off because of its popularity is a dangerous path to take, because that way lies the torture of missing out on something special. Yes, there’s something great about being on the fringes of popular culture, discovering shows that will never infiltrate the mainstream consciousness and yes, occasionally, the snobs are right but more often than not they are dismissing something before investigating it properly.

But there are people out there who insist on venting their ire at the fact that the show ever existed. 10 years since its final season people still insist it was a pile of steaming dogshit. These are the comedy snobs, and I intend to tell you some of the reasons why they are wrong for turning up their noses at the Barone family.

Everybody Loves Raymond is set up around a basic premise:

But the thing about Raymond  is the writers would be able to sell you on ridiculous ideas, like in the series 7 episode ‘She’s The One’ where a woman eats flies or the classic series 5 episode ‘The Wallpaper’ where Frank and Marie open the show by driving through Ray and Debra’s wall. Or where the writers would play with the format, for an example of this see the series 8 episode ‘Golf For It’, which is almost completely confined to a car with Ray and Robert.

But here’s the genius part. Although Everybody Loves Raymond isn’t necessarily a show you have to watch religiously to follow – as with all the best shows, you watch one you might enjoy it, you might laugh – however, invest in it and you get a multi layered joke fest with recurring characters that often have nothing to do with the main plot but who enrich the show by just being there.

Beneath the bluster of the main characters lies a supporting cast that take the show from funny to classic. Over the years the show notched up a list of players that were either comedy or acting royalty.

Shows like The Simpsons are praised for the fact that they have jokes weaved into the background – but a show like Raymond? It’s just seen as a straight forward sitcom but it’s oh, so much more. It might have started out as such but it rewarded loyal viewers again and again.

So let’s take a look at the characters that added that extra something to the show. 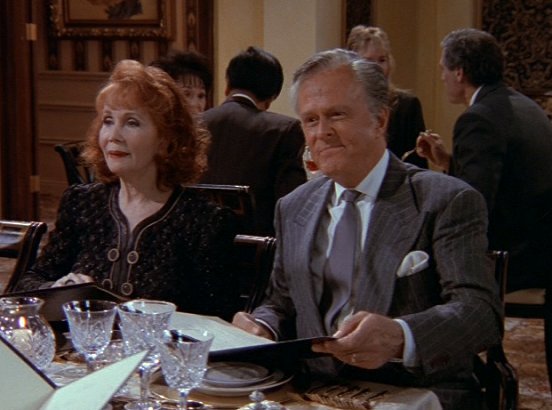 In the first series we get introduced to Debra’s parents. Warren (Robert Culp) and Lois (Katherine Helmond). They work so well as they’re the opposite of Ray’s parents – less overbearing, freewheeling, non-traditional, unrelentingly positive – and as such rub up the Barone’s the wrong way. After they’re introduced, subsequent appearances don’t patronise you by explaining the situation all over again and they just come in expecting you to know them, sometimes all the setup you get is a passing remark from Ray or his parents expressing discomfort. Just another example of the economy of writing in the scripts

Ray has a small, but effective circle of friends that broaden his comic scope and give him a sounding board outside his family. In the first series this includes the ubiquitous Kevin James in an embryonic version of his King of Queens character Doug Heffernan, here called Kevin Daniels for the first two series before inexplicably undergoing a name change. Dave Attell also makes a couple of appearances as Dave (no surname) who mysteriously gets bumped after appearing in only two episodes. We can only assume Kevin killed him which is why he had to change his name to Doug. 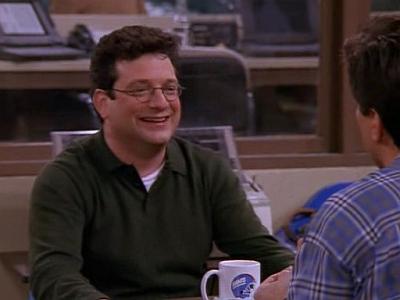 Andy Kindler (now found in the brilliant for different reasons Maron) plays the similarly imaginatively named Andy, Ray’s first true friend in the series who sticks around without getting himself killed by Kevin, or changing his name, or moving to Queens. Then there’s Bernie (Tom McGowan), special amongst Ray’s friends in that his character not only survives for the whole nine seasons but also is the first to have a name that’s different his real one. Tom McGowan was starring in Raymond while simultaneously being Kenny Daly in Frasier and here he plays more or less the same character, a slightly put upon guy trying to do his best, but he becomes one of the main three of Ray’s friends along with Andy and Gianni (Jon Manfrelloti). Gianni also has the honour of having an actual character name from the off and considered special enough to enter into a brief relationship with one of the main characters, Amy, Robert’s on again, off again girlfriend.

In the second series you have none other than Bob Odenkirk and Brian Posehn turn up as Ray’s geeky old high school buddies Scott and Warren. They then don’t turn up again ’til series 5 for one episode, but the writers don’t give any newbies any background on who they are, they just turn up, fully rounded. Also notable about this is Posehn’s character Warren has changed his name to Walter and appears in a white suit. Walter White. Oooh.

There’s comedy gold to be found in Frank and Marie’s circle of friends. Franks pals at his lodge are always played by the same group of people and are given a personality each, but the most loved are Stan and Garvin, both played by character actors who have appeared in more things than you’ve had birthdays. Garvin (Len Lesser) was best known for the catchphrase “Ray’s here” but also delivered a steady stream of great one liners while Stan (Victor-Raider Wexler) appears mainly to deliver more one liners but is always a joy to watch.

Fred Stoller appears first as as Ray’s cousin, Gerard, in series 4 and is essentially just an extension of Stoller’s stand up persona. Gerard is a pessimistic, whiny voiced weirdo, basically Ray’s character dialled up to the nth degree but he would regularly turn up for one joke in the background, like the excellent running joke of him with his accordion in the series 7 episode ‘The Bachelor Party’ or just being uncharacteristically cheery in series 7 episode ‘The Cult’.

Veteran odd faced actor Phil Leeds turns up as Ray’s Uncle Mel throughout the first two series and despite only appearing in four episodes gains a catchphrase of sorts or at least a repeated riff on protesting that he’s not gay and is remembered fondly by all of the shows fans. 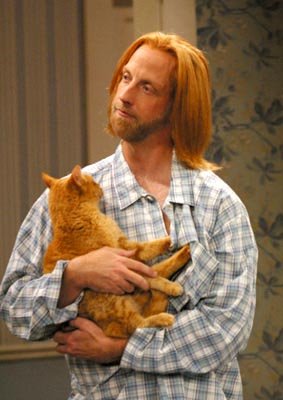 The first of Amy’s relatives to appear is her brother, when Ray sets out on a mission to find a certain Hackidu card (a Raymond universe version of Pokémon). When he’s first seen, he’s called Russell and portrayed by Pee Wee Herman himself, Paul Reubens. He’s then not seen again until Robert goes to Amy’s parents to ask for Amy’s hand in marriage. Out of the back room appears Chris Elliot, another in the show’s long line of comedy stalwarts adding to the tapestry of the show, and from then on Amy’s brother gets re-christened Peter. They could have easily said it was another brother, but no. One of the first things Elliot says as Peter is that he remembers Ray from the first meeting which makes me wonder if something more sinister didn’t go on. Especially as Peter is a slightly creepy mummy’s boy who lives in his parent’s basement and Elliot plays him with a level of creepiness that’s only two steps away from Norman Bates.

Amy’s dad Hank is none other than comedy legend Fred Willard, playing an up tight, Christian opposed to Robert and the whole Barone family as is Amy’s mum, the innocent and gentle Pat, played by Georgia Engel, another legend who has been in everything from Mork and Mindy to The American Office. As the show carries on, although Hank rarely goes beyond slight annoyance Pat turns out to be much less innocent than she first appears.

First of all there’s Judi (Sherri Sheperd), Robert’s partner on the force. She never appears in a scene without delivering a laugh and is a force of nature that stamps her mark on each scene she appears in, often getting the biggest laugh. She even gets a full story and becomes an integral part of Robert’s life. Then there’s Peggy (Amy Aquino), known to the fans as the cookie lady because at one point she beats Ray up over cookies, as such she scares Ray and is something of a bully. It’s a credit to the show’s writers that despite only showing up in four episodes we get a good idea of the character. She turns out to be a little bit sad beneath all her bravado and in a later episode hooks up with Amy’s brother.

Another excellent recurring character is that of the families priest Father Hubley. Put upon by the family and called into the most meaningless of family fracas, Father Hubley was played by the excellent Charles Dunning, a veteran actor who appeared in classic films like Dog Day Afternoon and The Sting. Hubley was always weary of the family and Dunning played the part with subtlety making Hubley one of the funniest characters in the entire show.

Then hidden elsewhere we have the always brilliant Dan Castellaneta turning up as the uptight Bryan Trenberth. This character only makes two appearances, once in charge of snacks at Ray and Debra’s son’s T-ball meeting, then again four series later as the coach of the boy’s basketball team, but Castellaneta plays it so well that the character is burned on the consciousness of viewers.

If you’ve never watched Everybody Loves Raymond, or have just never committed yourself to the show, it really is one of those series that is worth a binge watch.

In terms of popular comedies that are as good as their viewing figures suggest, it’s up there with a show like Friends. It has all the ancillary characters that Friends does and makes you care for them in the same way. In a world where it’s so easy to get something like this so wrong (see Two and a Half Men, the ultimate example of a show that could have been great but relied on star power to carry its weaker points) Everybody Loves Raymond deserves to be held up as a classic sitcom, so indulge yourself.

Go and meet the Barones.

Red Dwarf – The Perfect Combination of Comedy and Sci-Fi?