Film in Motion is a series of articles and interviews which look at the different roles needed to produce the visual medium of film. This week we talk to director of photography, Shane Serrano…

Shane Serrano is an Award Winning film maker & photographer. In early 2008 he founded the Crude brand, starting as a short lived independent magazine that focused on showcasing talent in Irish alternative & urban culture. The publication ceased in late 2009 due to the economic crash. In 2013 the brand re-emerged as Crude Films, web based short films & documentaries. Along with short films, documentaries, commercial work & music videos, Shane has a substantial body of work and client list. 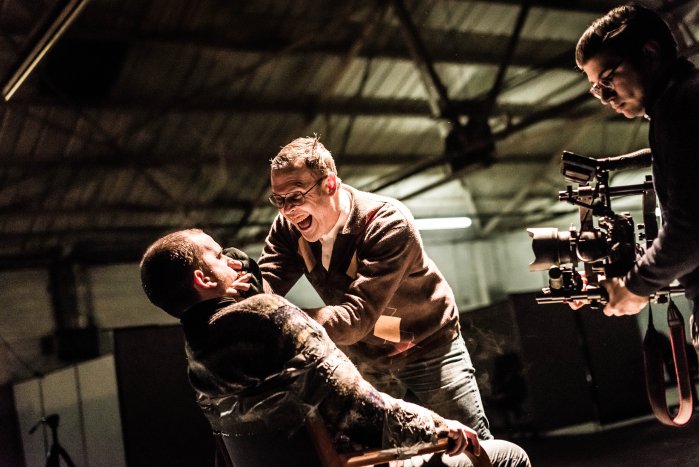 How would you define the role of Director of Photography and what they do?

The Director of Photography is there to essentially help the director in their vision. The Director may have an idea of what they want to do and they may turn to the D.O.P for their advice, input and their vision as well. The D.O.P will have a knowledge and experience in operating the camera and will know what would suit best and what’s going to work best for the overall achievement of the image of the film. It’s basically that collaboration.  It’s not the Director who calls the shots, it’s not the D.O.P who calls the shots. It’s working together for the best result.

How did you get into cinematography?

Growing up my parents had video cameras and we were always making home movies and terrible little short films. Then I got more interested in making videos through skateboarding and seeing a lot of skateboarding videos growing up. When I went to college I was introduced to a lot more than just that side of videography.  When I was on Erasmus in Germany for 6 months I studied scriptwriting. It was really quite interesting, they gave us a theme and we wrote a story. Then the asked us to write the same story again only describing what you see, then again describing only what you hear. Which was a really great exercise because you got to see and hear all the elements in your head. We were then supposed to move on to documentary making but the lecturer decided to scrap the syllabus to make my script into a short film.

It was a true story about a car crash. They phoned this junk yard down the road and they brought up a car for 100euro and took it away the next day. We were able to smash up the windows, flip it upside down and do anything we wanted to it. We just filmed for an entire night and we got our short film done, and it was terrible. We had a lot of people of different nationalities so there was a lot of accents and they weren’t really actors so the dialogue was absolutely terrible. I just edited it and made it into a silent film. That was my first short film and I guess I just started building from there.

What was your path into the industry?

Essentially that. Unfortunately the course I did in C.I.T didn’t really cater too much to filmmaking. They kind of made you a jack of all trades, master of none, but studying in Germany allowed me to pigeon hole my skills there a little bit more. When I finished my course and I moved back to Limerick I actually went into print publication. I ran a magazine for about a year and after that I did a two year professional photography course. So though I’ve never technically studied film, doing the photography course really helped. Especially because a lot of filmmaking these days is done with a DSLR. The same rules apply. It’s good to know where it starts because filmmaking is literally an illusion. It’s just a series of still images, so if you know how to control a still image, you can control the output on your camera. Since then I’ve been pretty much doing music videos and anything from commercial work to short films.

What training or experience did you find most helpful?

College was definitely helpful and I guess now we have YouTube education which didn’t really exist at that time. That helps a lot. It’s really just getting out there and every single time you do a shoot prepare as best as possible with all the skills and knowledge you have. Then something might go wrong on the shoot or you might learn something new that day, and then you bring that skill to the next shoot and the next shoot and so on. I would say do a course but I mean a lot of this you can learn within a couple of hours on You Tube. It’s just about experimenting and experience and just getting out there and doing it.

What do you shoot on and why?

Right now I’m primarily shooting on a Nikon camera, so I have the Nikon D800 and the D600 as my second shooter. The main reason I’ve been shooting with Nikon is as a photographer I had Nikon cameras and I had all Nikon lenses and then my Dad had all old Nikon Lenses. The beauty of Nikon is its compatibility is straight across the board, you buy really old lenses and they will work on your current DSLRs. That’s where I’m at right now, I am in the DSLR market but I am looking to move out of there and into the cinema camera market within the next 12 months as well.

What is the best part of your job?

Variety. Variety of clients, of style and approaches. It’s not that repetitiveness. I like doing the commercial work because you can switch off a little bit, you don’t have to feel like ‘how do I be creative here?’ There is a joy to all of it. If I was doing that all the time then it would probably be very tedious. And then it’s just very stressful if you have to be creative all the time. I feel like I can’t keep up with all of the client work I get offered either. I counted the other day and I think I’ve done like, from short films to music videos to commercial to everything, around 400 different pieces or something like that in the last few years.

What have been some of the greater challenges in your work?

I guess being a one man band is a challenge in itself. Literally for a long time I have been the director, the cinematography, the editor, I’ll do everything. I’ll do the pre-production work, I’ll do the casting I’ll do everything for whatever project it is. I know my work might have a particular style. I know some people have seen my work and gone that was definitely made by Shane. I sometimes see that maybe as a bad thing just because I’m not conversing with a team. I’m not exchanging ideas constantly, so that has been a big challenge. I want to have a team to work with and a constant team. Someone that I am constantly bouncing ideas off and that’s what I am working on right now. I will be expanding my sole trader production company to essentially a limited company with more people.

What are you currently working on?

What advice do you have for someone looking to become a D.O.P?

It’s weird because before I became a filmmaker, before I even had a camera of my own or any equipment, I think in my mind I almost knew how it had to be done. Even though I hadn’t actually done any of it. I saw how friends made films or videos and I saw where they went wrong. Where they were holding the shot too long, or where the framing was wrong. I knew how it had to be done. I think that came from, whether I was doing it consciously or not, studying and observing everything I watched. I’d watch a film or a music video and think about what I liked about it, what it was about the shot that was memorable to me.

So the advice would be, look at what you like in other work and take from everything you see. Take a little bit from everything because if you copy one person its plagiarism, but if you copy everyone its research. Give it your own style and your own approach. Just keep asking yourself if you like something, why do you like it, and get out there and do it.  I would say to anybody that wants to get into cinematography, you can literally start doing these things with your phone, you don’t have to fork out a couple of thousand on a DSLR and some lenses.

Check out the rest of our Film In Motion Series below:

Eadáoin O'Neill is a writer, reviewer, and film enthusiast from Limerick. She currently writes and edits the film blog for So Limerick and in the past has worked as a music reviewer, Press Relations Officer and editor. When she is not watching/writing/talking about film she can be found with her head stuck in a book. She tweets @EadaoinONeill1.