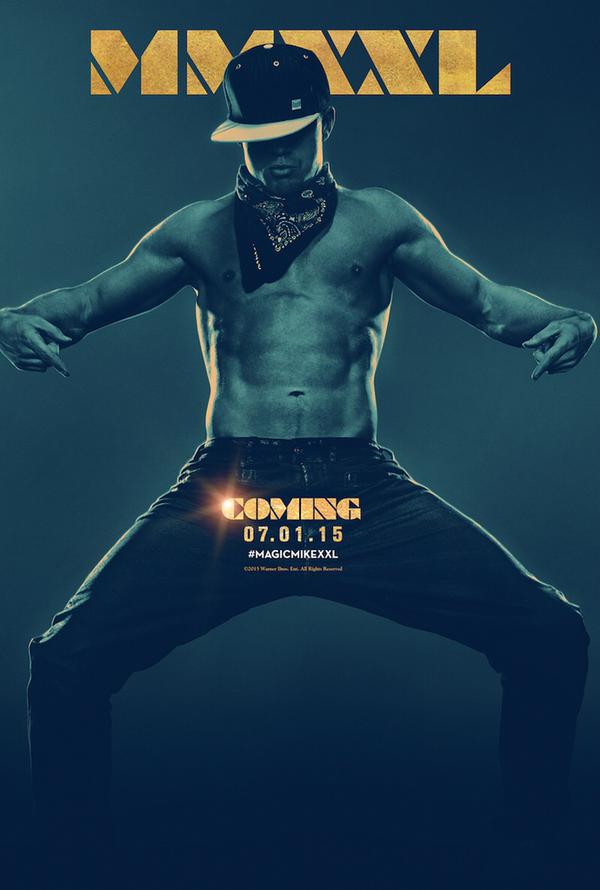 Magic Mike XXL is the follow up to Steven Soderbergh’s Channing Tatum / Matthew McConaughey vehicle Magic Mike; a movie that looked like an excuse to watch hot lads almost get naked. While it knew that was the main draw, it managed to be a surprisingly great mixture of male bonding, a critique of capitalist logic and a rom com all at once. Soderbergh’s left the director’s chair but shot and cut this film so his fingerprints are still there. That said, the sequel really is just an excuse to watch hot lads almost get naked. When this isn’t being fun it’s being slapdash, half formed and lazy.
The script catches up with Mike, now unhappily following his dream of building furniture, having left the stripping game behind. Most of the cast, including Matthew McConaughey’s Dallas have left and are dismissed with a few lines of dialogue. Mike’s now ex girlfriend is given a little weight via her absence after Mike’s wedding proposal but still not enough to make this feel focused. Again, this feels like an excuse, not a raison d’etre. After a very brief setup Mike rejoins the remnants of the old gang as they head to a strippers convention for one last hurrah. This means there’s nothing at stake but gives everyone a reason to strip their way across Florida on a road trip. Someone should really be fired for not calling this ‘Road Strip’.
Along the way the film is enjoyable scene to scene but doesn’t hang together due to tonal shifts and a series of convenient excuses for the guys to take off their clothes and then move on towards the convention. There’s something nice about a group of old friends talking about foiled plans while going on a final blowout together but the script never really commits to this. It’s often an enjoyable sex comedy, often an enjoyable character movie and often just a bunch of different stuff that never gels.One example is when the gang stops over and ends up emptying the wine cellar of Andie MacDowell’s divorced, sex starved Southern Belle (constantly on the verge of saying ‘oh I do Declayah’) in her mansion. The scene feels like a setup for a sexy hijinks then veers into sad character moments before turning into a convenient Deus Ex Machina plot point. Everyone’s having a ball, and that comes across, but it feels like a bunch of movies mashed together. Another symbol of the way this movie justifies its existence is in the love interest. In the 2012 film she was integral to Mike’s journey and to the plot. Here, the new girl is completely superfluous; just a barely there randomer that he wants to make smile.
At least, like her, you will smile a lot during this. The stripping scenes are always fun and, Jesus Christ, Tatum can move. There are laughs involving car crashes, drugged out dances soundtracked by the Backstreet Boys and group drag routines. It retains a sense of fun throughout, both in performance and how it’s shot and cut. The stripping scenes are almost all great. Even the tonally weirder stuff is fun to watch so you won’t be bored while waiting for the lads to oil up for the fifteenth time. From the title to the posters, no one’s trying to pull a fast one here. You will have fun during the 115 minute runtime. Just expect toned, muscle bound bodies not a coherent film.
Magic Mike XXL is in cinemas on Friday 3rd July. Check out the trailer below.
[youtube id=”oLoyU3xYwbs” align=”center” autoplay=”no” maxwidth=”750″]
FilmMovieFilm Reviewchanning tatumMAGIC MIKE XXLSODERBURG
Share FacebookTwitterGoogle+ReddItWhatsAppPinterestEmail