Film Review | SAN ANDREAS – The Rock Battles Some Tectonic Plates… But Who Is The Real Winner?

San Andreas is a disaster movie. That’s a declaration of genre although it’s also not a very good movie. It’s a disaster movie in the grand tradition of those classic disaster movies from the 70s that were produced by Irwin Allen and featured big stars in perilous situations. At their best this meant you got to see Paul Newman and Steve McQueen take on The Towering Inferno with the power of charisma and water. At their worst you got to see Michael Caine being chased by a big bad bunch of killer bees in The Swarm. Roland Emmerich merged the genre with an alien invasion plot to great success with Independence Day and followed that with The Day After Tomorrow and the ultimate disaster movie, 2012, a movie that features John Cusack outrunning the apocalypse in a limo… twice. 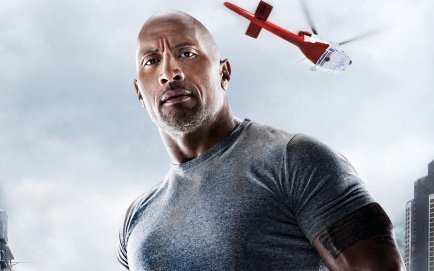 These movies will always feature the same types of characters. There is a religious character or a crackpot, an expert scientist/fireman/beekeeper character, an innocent child or innocent dog character and a cowardly corporate character that it’s okay to want to see die in a horribly magnificent way somewhere towards the end of the second act. San Andreas features many of these familiar characters.

The movie opens with an idiot teenage girl driving and texting whilst on a twisty mountain road. Then a tremor shakes her car off the road and onto the mountainside below where she probably would have ended up eventually due to her negligent driving. Enter Dwayne Johnson as a rescue helicopter pilot and his wise cracking crew who save the girl and establish the heroic credentials of Dwayne Johnson which is important as he is the star of the movie.  We then meet his estranged wife played by Carla Gugino and his daughter played by Alexandra Daddario. Dwayne and his wife are both struggling with grief over the loss of their youngest daughter, and now the wife is moving in with her new boyfriend; a self centred, rich architect who acts more like a politician who is driven around in a limo attending important meetings about his new big building that will feature in a major set piece later on.

Then Paul Giamatti, playing the expert seismologist character, warns everyone that a major earthquake unlike anything seen before is about to hit after a series of smaller earthquakes takes out the Hoover Dam and his best friend in a devastating sequence that leaves Paul Giamatti very devastated. Dwayne sets out in his helicopter to rescue his wife and daughter and gasp at the ensuing devastation. There are set pieces galore and an abundance of computer generated dust. It all unfolds in a mildly boring way and then it’s over. The only surprise is a famous cameo that I won’t spoil as it may be the only interesting thing about the whole movie. The cast don’t have anything interesting to do beyond running and shouting each other’s names. Dwayne Johnson cuts a heroic enough jib and has a natural charisma and hulking presence that fits the tone in a way that someone like James Franco wouldn’t. At no point do we really believe that the perilous situations Dwayne and his family find themselves in will result in their deaths. So all the possible tension and drama of this disastrous situation dissolves and you find yourself wishing there was at least an innocent dog to root for.

San Andreas is in cinemas from Friday 29th May. Check out the trailer below:

Review | SOAK delivers a magical, brilliant debut on ‘Before We Forgot How To Dream’

E.T. is my Childhood, or, How the Extra Terrestrial Gave Me All the Feels

Do Film Reviews Matter Anymore? I Watched A Monster Calls to Find Out