The cinema-goer remembers his late mother, a laundry worker, as he watches the film Suffragette.

It’s the hard-hitting tale of a struggle for equality; a mediation on violence and non-violence; a set of family dramas and a major historical story very well told by the film-makers.

The cameo role for Meryl Streep as Emmeline Pankhurst gives her some famous lines, including the one that raised controversial publicity for the film.

I would rather be a rebel than a slave 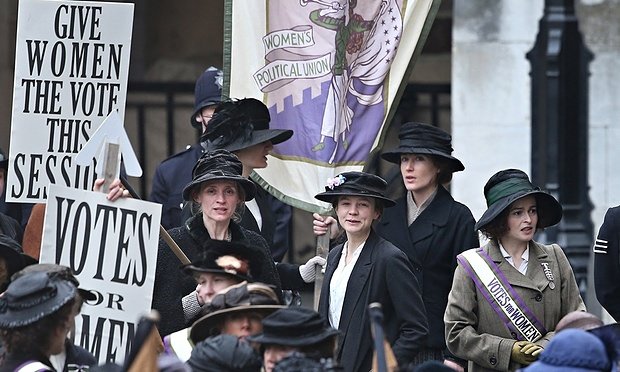 Rebellion and (wage-)slavery, both manifestations of oppression and discrimination, are very well shown by the film-makers in their choice of a laundry worker and her colleagues as the main protagonists of the film. When Mrs. Pankhurst calls for civil disobedience from the balcony of a fine middle class London house – Deeds not words – the cinema-goer knows it is the women on the street who will face the violence of the police riot that ensues. It is they who then enact the violence Mrs. Pankhurst’s words proffer. The women on the street blow up letter boxes, cut telephone wires and bomb the country home of Lloyd George, the parliamentarian they consider to have let them down.

It is the Special Branch police man, Inspector Arthur Steed, ably played by Brendan Gleeson, who delivers the reality-check when he insists that Lloyd George didn’t lie to the suffragettes. He didn’t promise them anything. So up goes the ante and the post-boxes and the second home in the country.

The family relationships of the day (and of today?) are ably captured by the Branch man – Don’t bother arresting them. Let their husbands deal with them. But those forms of social and cultural control are weakening as the women, agitating on many fronts and in many ways, complicating the given norms, questioning and challenging them, bring pressure to bear for change.

The film is driven by the terrific performances of the two laundry worker leads, Maud Watts (Carey Mulligan) and Violet Miller (Anne-Marie Duff). They are presented as forthright and capable, with complicated lives and conflicting aspirations in regard to their work, their politics and their families. The chemist and bomb-maker Edith Ellyn is played by Helena Bonham Carter, whose great-grandfather, H.H. Asquith, was the Prime Minister of the United Kingdom from 1908 to 1916, during the height of the suffrage movement. He was a staunch opponent of votes for women.

The frantic ferment of anti-state activity underway by the women is set in the context by other militancy by Fenians and anarchists. The indirect violence of poverty, discrimination, imperialism and oppression leads to direct violence by state forces and by their opponents There are many tragedies. The Branch man, Inspector Arthur Steed, predicts that Maud Watts could lose her life. The scene in which Maud Watts replies is one of the most telling in the film.

The law means nothing to me. I’ve had no say in making the law.

Notably The Inspector becomes increasingly less voluble from then on, as even his stake in the society becomes more fragile. He is speechless by the final tragedy. 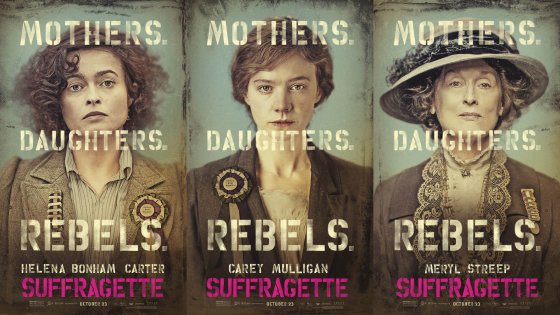 It is Emily Wilding Davison, played by Natalie Press, not Maud Watts, who dies, mown down by the King’s horse at the Epsom Derby. The scenes at Epsom are shot magnificently, with the camera never very far from the action and the individuals living it. It is rarely out of the crowd, offering the cinema-goer full immersion in the action. Similar work is used during the police riot scenes, to very good effect.

The screenwriter, Abi Morgan, has harnessed a sweeping historical tale by writing a period in the lives of young working women, facing challenges and decisions of their time and place, that find them finally walking in the funeral of one of their friends and comrades. Their deeds and words contribute to a degree of emancipation that presents further challenges and decisions to people living now.

Abi Morgan also writes the TV cop and mental health drama, River, now on BBC. Like Suffragette, the cinema-goer considers it worth a look.

The cinema-goer is reminded of a t-shirt a friend brought back from early Sandinista days in Nicaragua. It bore the slogan – La lucha continua.The Suffragettes held to – Never surrender. Never give up the fight. The film ably underlines that. It does not shirk the cost. It brings before us the challenge of achieving social change in a world of direct and indirect violence. And it does so by means of an engaging and exciting film.

Suffragette is in cinemas now. Check out the trailer below.

Poem of the Week|25| PASTIME

Film Review | I, Daniel Blakeis a Modern Parable on the Horrifying Nature of the…