Film Review | Terminator Genisys – Arnie Said He’ll Be Back… But Is It The Revival We Wanted?

By Graham Connors Last updated Jul 10, 2015
Share
Picture this – it’s coming toward the end of June, there is ten year old kid trying to get through those last few days of fourth class without exploding with excitement at the thoughts of an impending, adventure filled summer. You are not the only one in this situation as you probably have both a curriculum and a teacher who have run out of steam, so instead of going back over long division or Irish tenses, the old 32 inch television the size of a VW Beetle is rolled out to show a film and kill about two hours. Of course this ten year old is me and, hopefully, you as well. It is at this point that our stories may differ as most ten year olds are shown Mary Poppins or Three Men and a Baby or any kind of Disney film in school. When I was ten, one of the teachers decided to show the class The Terminator, freshly taped from the television the night before. When you are used to watching kiddy, cute films, to be sat down in front of a time traveling cyborg with designs on wiping out humanity is like being hit in the puss with a wet tea towel. My love of the Terminator franchise started right there, as did my love of James Cameron and Arnold Schwarzenegger. I may, therefore, be the wrong person to review Terminator Genisys, the fifth film in the Terminator series, as Cameron’s first two films are easily two of my favourite sci-fi/action films and this latest Terminator film focuses on both these films and decides to tear them apart. Sacrilege, surely? Lets see if an ageing T-800 can still cut it on the big screen. 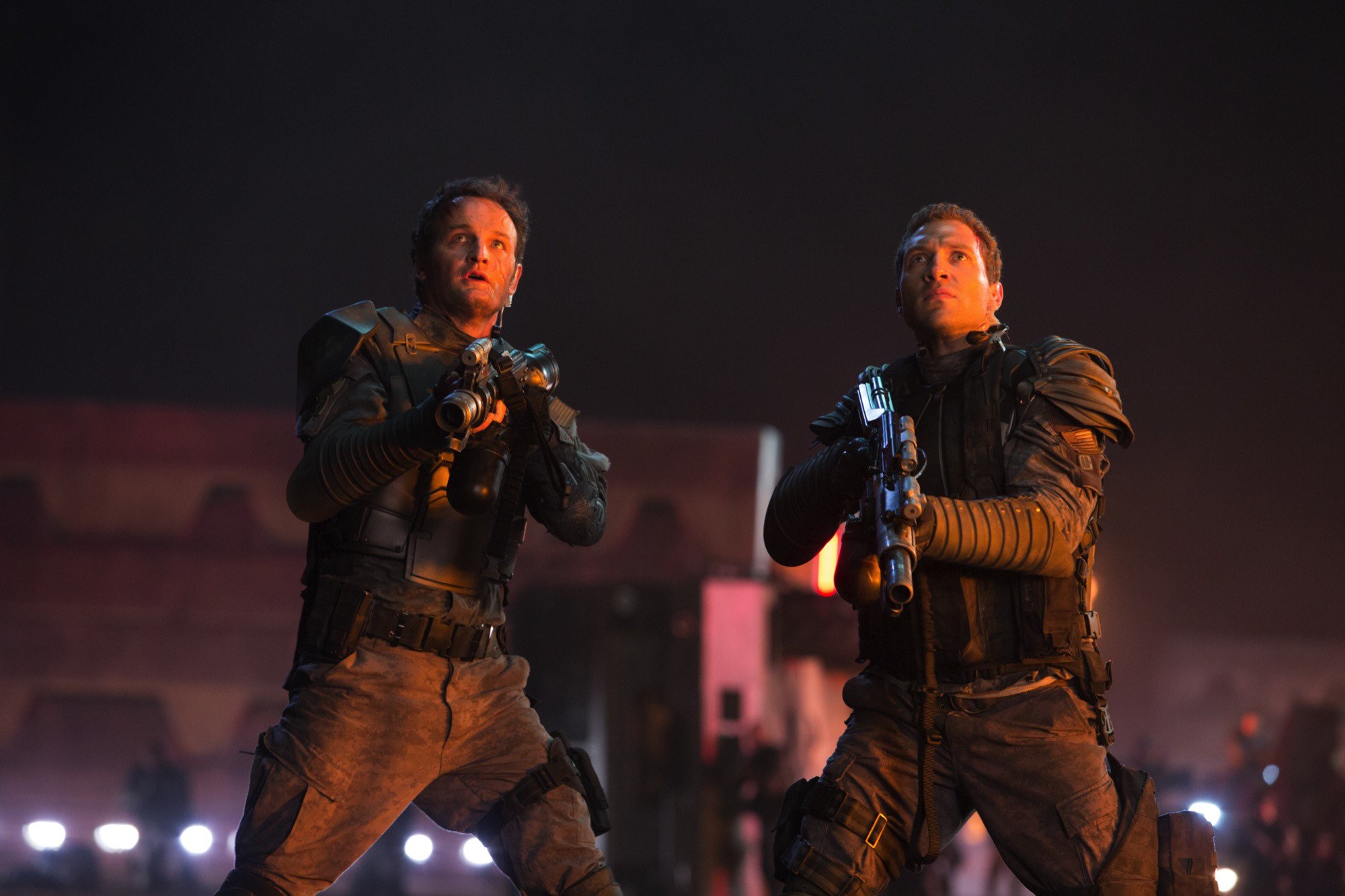 It’s the future, 2029, and Skynet is all but destroyed. The resistance has won. The human race is rising from the ashes of Judgement Day. Yet they have one last battle to fight. The machines have built a time traveling device and John Connor, the leader of the resistance, knows that if Skynet gets a chance to use it then all he has done could be undone (yet paradoxically knowing that these events have to happen for him to exist in the first place). Arriving moments too late to stop the hulking T-800 Terminator from using the time machine, Connor sends his trusted lieutenant, Kyle Reece, back to 1984 in pursuit of the Terminator to save Sarah Connor, John’s mother. John Connor prepares Kyle for what he will find in 1984, that his mother is weak and afraid and alone. If Kyle fails then the resistance fails and mankind will perish (no pressure).  Of course nothing goes according to plan and when Kyle arrives in 1984 he finds it a radically different place with Sarah Connor anything but weak and afraid and alone. She has a guardian, a most unlikely protector. It is now up to the three of them to unravel this changed past to save the future.
Okay, I won’t deny that I got just a little bit giddy when I saw the first trailer for this film. The fanboy in me did somersaults and I delighted in the fact that Arnie was back in his signature role. But how would it work, how in hell could Arnie come back to a role he first played over 30 years ago – he played a machine?!? Herein lies the beauty of this film, it uses the mythology of the previous four to build itself neatly into the overall framework of the series. The T-800, Cyberdyne system model 101, (Arnie, basically) is a metal endoskeleton wrapped in living human tissue. What does tissue do? It ages. BOOM!! Instant Arnie action!!! If you can get over the fact that Arnie is craggy and grey haired then you are halfway to enjoying this film. And there is plenty to enjoy, the first hour really moves at the most perfect pace, there is plenty of action and more than enough humour which are neatly balanced. Then again, you would expect as much from Alan Taylor, director of the recent Thor sequel, a film that needed a good balance of action and humour to succeed, which of course it did. Yet, just action and humour does not necessarily a good film make. What works against the film are elements that James Cameron wisely decided to cut out of his two films – namely the humanising of the Terminator. Where Edward Furlong gave him a few catchphrases in T2, Cameron cut out scenes of trying to teach the machine to smile (look it up in the directors cut, it’s worth a view). In this film, Arnie rolls out that ridiculous smile three times and it just does not work. Cameron’s Terminator was cold, hard and calculating. Taylor’s Terminator is not. While he looks like a granddad, this new version of Arnie’s iconic character acts like one too. You see, this new Terminator film is designed to act as a springboard for a new series of films as Terminator Genisys is built for an audience that does not necessarily know the previous films too well. For all diehard Terminator fans, of which I am one, this is the most frustrating part. Quite cleverly this film painstakingly recreates moments from the first film (the arrival of Arnie and Kyle Reece is almost shot for shot perfect and the film geek in all fans will delight in hearing those magic words “nice night for a walk” as we all know what follows after – or do we? You see Genisys changes all this, what we know and love and have accepted gets thrown out the window and by doing so, while it makes for interesting viewing, it also tarnishes the legacy of the first two films as the timeline shifts and what we have known and loved from 1984 and 1991 is virtually wiped out. That is my big gripe, the events of The Terminator now never happen. Boo. Hiss. Balls! Yet, I’m sure all involved entered into the making of this film knowing that they can never match Cameron’s originals, so why not make the originals obsolete? It’s certainly a clever trick when it comes to a remake/reboot like this, but unfortunately it just doesn’t ring true. 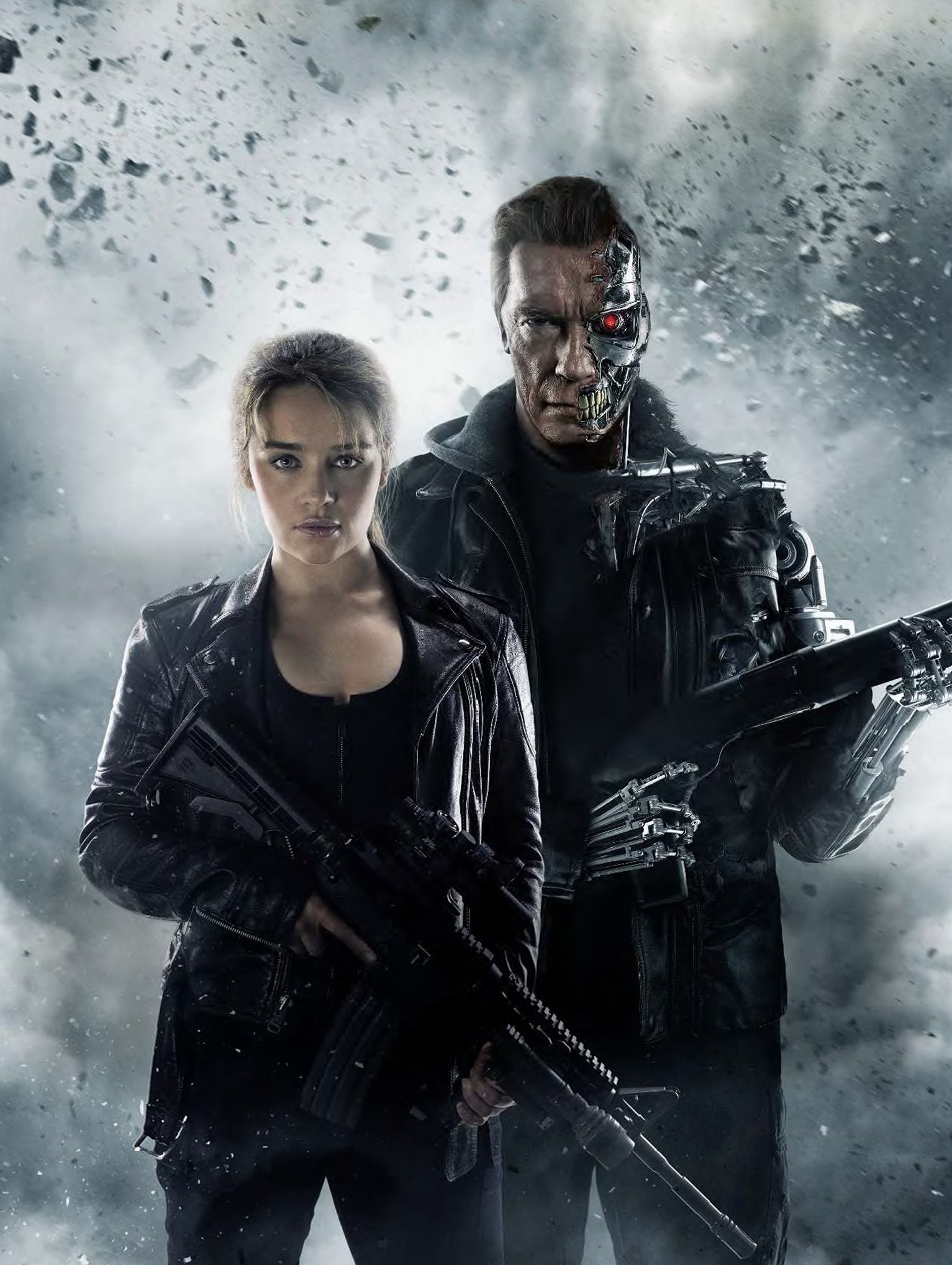 While the events of the previous films change so too do the characters. In the first film Sarah Connor is a frightened young woman, reluctantly caught up in a battle to save mankind. In the second film Sarah Connor is now a battlehardened warrior, taking the fight to the machines. In this the fifth film Sarah Connor is a strange mix of both, she is cocky and sure footed but also quite tentative and bound by her emotions as, when things start to turn away from what she knows to be a certain path into the future, she hesitates. Emelia Clarke is a very good Sarah Connor but she injects a little too much wonder into her portrayal of Sarah, she does not have that ruthless edge that Linda Hamilton brought via T2. The Sarah Connor we know from James Cameron’s films was hard and cold. This Sarah Connor is far too familiar with her guardian Terminator, going as far as calling him Pops. While this ageing Terminator raised her from childhood, it is still a little unsettling to see this type of relationship between them. It is all very comfortable and while that is not necessarily a bad thing it is just hard to swallow considering what has gone before, but of course, as I have mentioned earlier, all that has gone before is now gone completely and never happened (such is the problem with time travel). Jai Courtney, whom I have to say I took a dislike to after watching his truly awful performance in that truly awful film A Good Day to Die Hard, really does a good job as Kyle Reece. Of course no one will ever be Michael Biehn and Courtney does not, probably because he knows he cannot match the level of cool and focused desperation that Biehn brought to his version of Kyle Reece. Yet, in his defence, this is a different character, he is not landed in the same situation at all and must deal with it accordingly, with a little apprehension, especially when he first meets the guardian T-800. His distrust of this guardian is well realised and he maintains this throughout the film, building a father/son-in-law vibe that, while is interesting to see, fans of the series will baulk at the comic nature of it all. In many ways, his Kyle Reece swaps places with the original Sarah Connor and it does make for an interesting take on the character but it also presents us with bold realiy that the producers and scriptwriters could do nothing more creative with the character other than flip it upside down. Jason Clarke’s John Connor is another major bug bear for me, the trailer gives away what should have been the major twist of this film and takes the one real wow moment and totally wastes it. The producers have tried to do more with his character than just create a stoic war hero and for that they do deserve praise and Clarke injects a bit of pathos with a lot of menace to create this new, but not necessarily improved, version of John Connor.
The unshakeable impression that Terminator Genisys left on me was that this was a completely unnecessary film. The producers surely realised that they needed Arnie, in some capacity, to make a new Terminator film fly. Of course the last two films were not successful (I will defend Salvation, I thought it was great, if a little dull in places) and they were not about to let such a popular franchise fall by the wayside. You get the impression that this film was only dreamed up after the writers sat down to try incorporate a pensioner version of Arnie into a new film. To be honest they did a really good job, especially in the early scenes where old Arnie gets to butt heads with 1984 Arnie. But After a lively opening hour the film really does lose its way totally. Time travel can often be a hard thing to explain fully on film and unfortunately this film stumbles dramatically and never recovers, where it had neatly built its action moments before, it now goes full on crazy to try make up for the fact that they don’t really now what best way to end it all. The ending descends into chaos and moments of farce and while I am not going to labour the point, it really shows that all the action and inventiveness was put into the first hour. The ending will leave fans with a bad taste in their mouth, non fans may look at it and go “really? That’s it!”

Terminator Genisys is not as bad as some are making it out to be. It is certainly an improvement on the last two but does not hold a candle to the originals – then again, nothing could. Once you realise this you’ll probably enjoy the film a whole lot more. And thankfully you’ll be able to leave the cinema humming that very familiar theme tune. Arnie is one thing but a Terminator movie really needs Brad Fiedel’s excellent music.

Film Review | The Founder: The Origin Story of McDonald’s Can’t Make for…