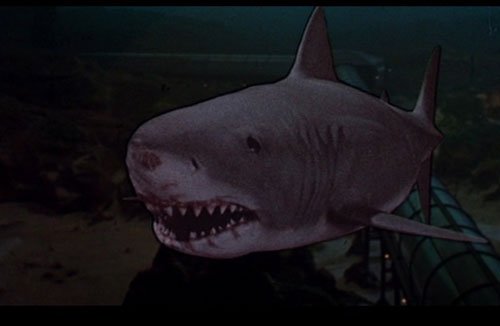 “Yes! A 3D version of the super-fantastic Jaws, one of my all-time favourite Spielberg movies and the movie that heralded the summer blockbuster!” was my initial thought. Then it quite quickly dawned on me that what I was watching was not a digitally re-mastered 3D version of the 1975 classic Jaws but in fact, the 1983 not-so-classic Jaws 3-D. And when I say not-so-classic what I actually imply is that it was so beyond terrible that it could not possibly have been made by someone who thought it could possibly be good. That man was Joe Alves and this was the first and last film he ever made.

The half-nephew once removed of Jaws finds himself locked in a Seaworld-esque theme park where he eats people. That’s the general gist. Dennis Quaid (Innerspace, The Day After Tomorrow) and Louis Gossett Jr. (Iron Eagle, Iron Eagle 2, and Aces! Iron Eagle 3) are the only actors of note in a film ravaged with terrible dialogue and a shark that is seemingly impossible to find in a mist of terrible special effects and murky fish-shit filled septic tank water. Jaws 3D was clearly nothing more than a marketing attempt at milking a franchise to death. I didn’t think you could milk a great white shark to death but hey, learned something new I guess. 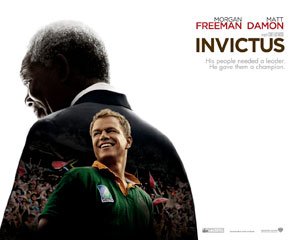 Having just watched the Irish destroy South Africa in the rugby on Saturday I said I’d watch Invictus, the 2009 film based on possibly the greatest moment in the history of South African rugby when the national team, having just returned from international isolation due to apartheid won the 1995 Rugby World Cup on home soil buoyed by the inspiration gained from President Nelson Mandela who saw that supporting the predominantly white Springboks as the perfect message for crossing the racial boundaries that had ripped apart South Africa for decades. I like rugby, I like history, I like Nelson Mandela…perfect!

Well maybe not so perfect. Morgan Freeman plays Mandela, the role he was destined to play since he went grey, and Matt Damon plays the captain of the Springboks, Francois Pienaar, and both project the honesty and refinement that these real life heroes deserve. But that’s about where the grace ends, with practically every other character turning into a horrible metaphor for racial differences. So unsubtle is the delivery of every character’s change from racist to non-racist that at one point a black guy and a white guy who dislike each other because of their race, actually awkwardly go to shake hands and then try to hug and then pat each other on the shoulder. It’s amateur hour and director Clint Eastwood felt that his two leads were enough to pull the film through. The ending, based on the final of the World Cup is so dragged out that the climatic underdog payoff is so stale and mouldy that no one cares. Eastwood is known for his speed behind the camera and supposedly only shoots one or two takes before moving on and this lack of patience shows throughout Invictus along with some of his other films, Gran Torino especially. Not many films are themed on rugby and racism so I guess it’s the best rugby film ever made about racism that I’ve seen. 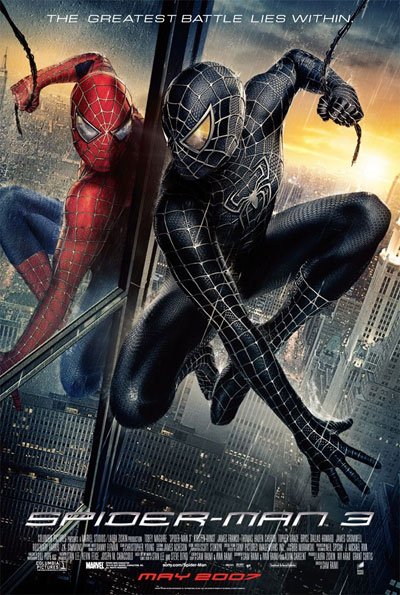 I have to admit that I only half watched this film. Because for the other half of the film I was rolling my eyes to heaven going “Why God?! WHY!?” I’m not religious in any way but some form of evil must exist for this film to have been made, so if there is that level of evil out there then there must be some level of sacred goodness somewhere in the universe. Ah no that is probably going a bit overboard but in truth Spider-Man 3 missed the mark on practically every level it tried. From the cartoonish special effects to the downright absurd notion of Toby Maguire being an emo Spider-Man, Sam Raimi’s effort suffered from too many characters playing too many silly roles with no deliverable set-pieces and a script about 30 minutes too long. It did have James Franco in it so I guess that’s something. But you can have all the James Francos you want, nothing will scrub the vision of emo Toby Maguire dancing down a street in New York, with his jacket collar popped and his fringe hanging over his eyes. I know Halloween is over but watch this IF YOU DARE!